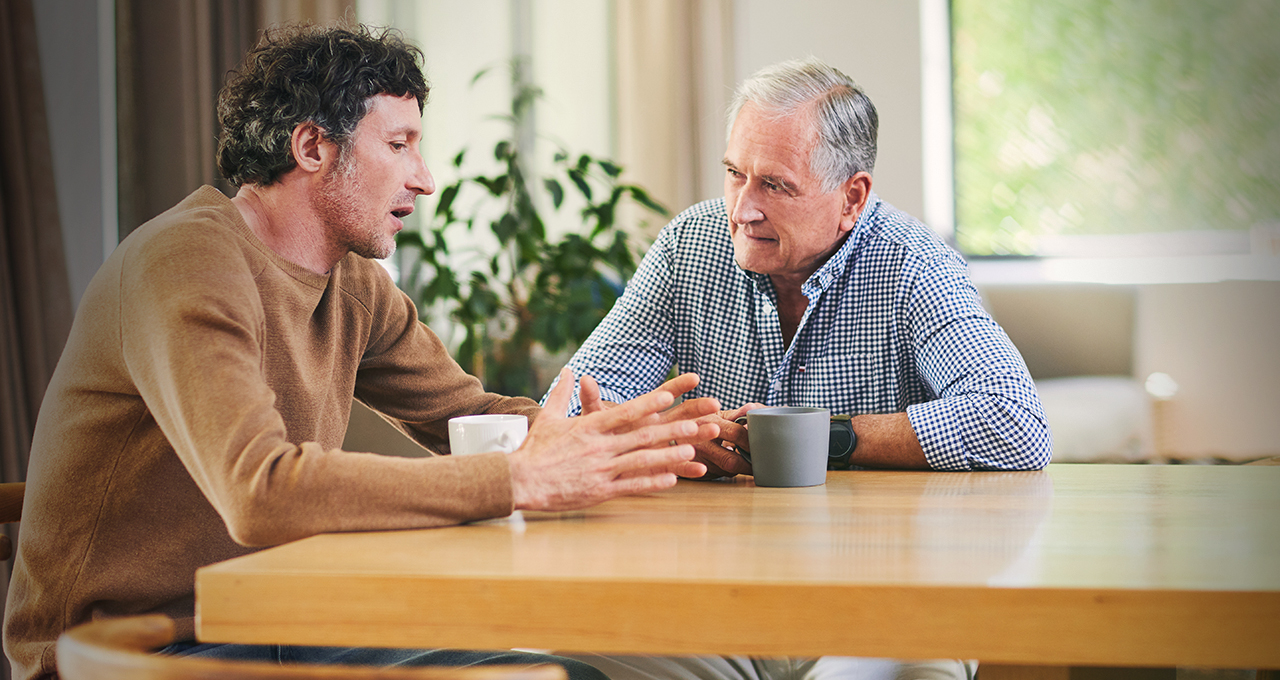 Financial independence is one of the many markers used to designate the crossover from childhood into young adulthood, and it’s a milestone most Americans (64%) think young adults should reach by the time they are 22 years old, according to a new Pew Research Center study. But that’s not the reality for most young adults who’ve reached this age. 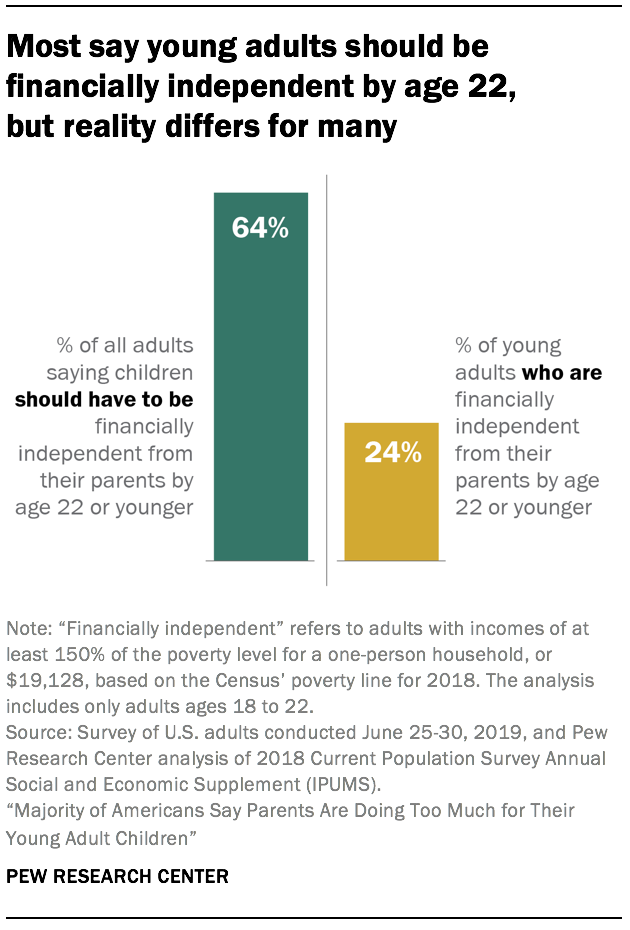 The share of young adults who could be considered “financially independent” from their parents by their early 20s – an assessment based on their annual income – has gone down somewhat in recent decades. A new Pew Research Center analysis of Census Bureau data finds that, in 2018, 24% of young adults were financially independent by age 22 or younger, compared with 32% in 1980.

The new survey findings underscore the extent to which many young adults are financially reliant on their parents. Some 45% of adults ages 18 to 29 (with at least one living parent) say they have received a lot of or some financial help from their parents in the past 12 months.1 According to parents of young adults, those shares may be even higher. About six-in-ten parents with children ages 18 to 29 (59%) say they have given their kids at least some financial help in the past year. The study is based on two nationally representative surveys. The first survey of 9,834 adults was conducted online from June 25 to July 8, 2019, using Pew Research Center’s American Trends Panel. The second survey of 1,015 adults was conducted on the telephone June 25-30, 2019.2

A majority of young adults who have received financial help from their parents say at least some of it was for recurring expenses. Six-in-ten say the money went toward household expenses such as groceries or bills, and significant shares used it to pay their tuition, rent or mortgage.

Beyond financial independence, the pace with which young adults are reaching other markers of adulthood has slowed significantly over the past several decades. Today’s young adults are staying in school longer and are marrying and establishing their own households later than previous generations. A growing share are living in their parents’ homes well into their 20s and even early 30s. Some of these changes are linked to economic challenges, while others may represent a realignment of goals and priorities.

Majority of the public says parents do too much for their young adult children; most parents of young adults disagree 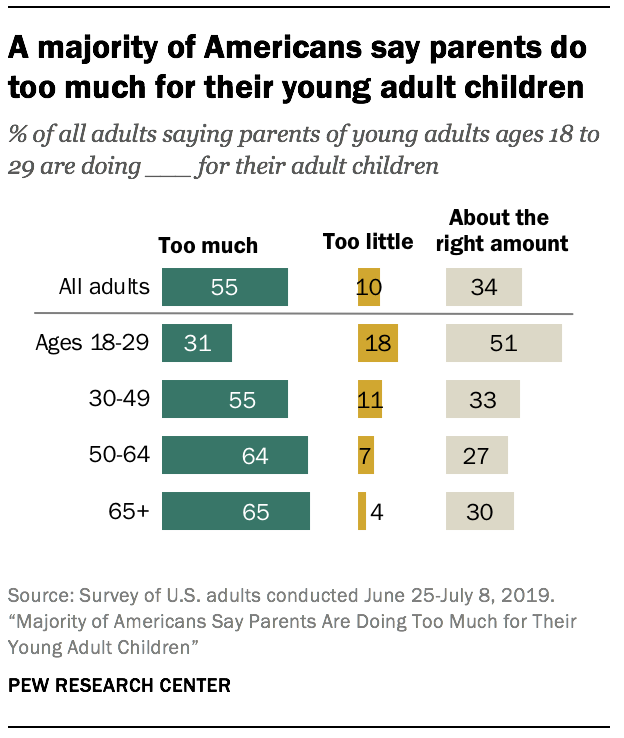 Young adults are less likely than middle-aged and older adults to say parents today are doing too much for their young adult children. About three-in-ten (31%) of those ages 18 to 29 say this compared with 55% of those ages 30 to 49 and more than six-in-ten of those 50 and older. White adults (62%) are more likely than black (46%) and Hispanic adults (38%) to say that parents help their adult children too much. 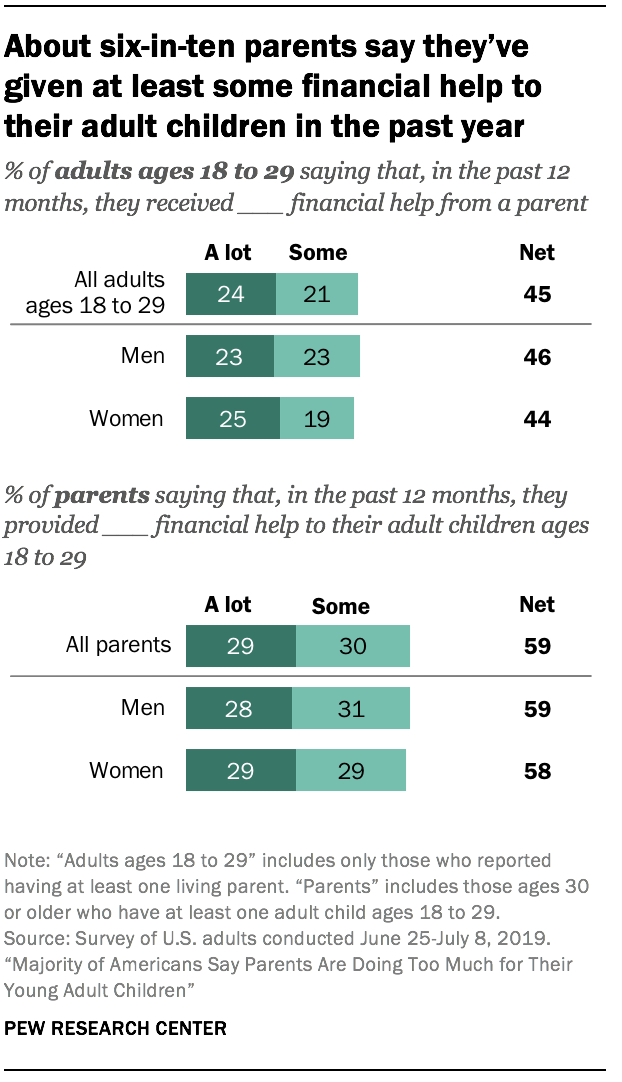 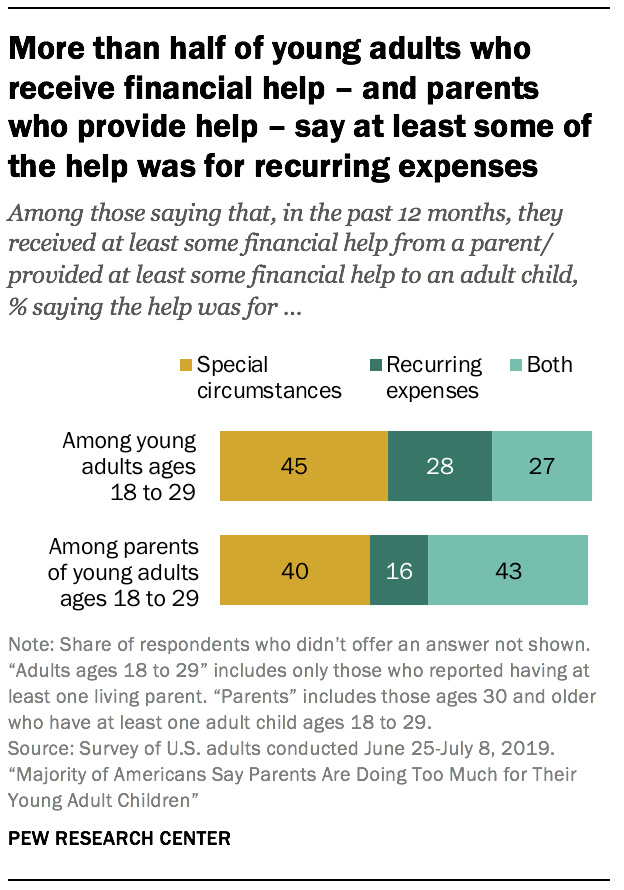 Again, these patterns differ according to the age of young adults. Those ages 18 to 22 are much more likely than those 23 to 29 to say that the financial help they’ve received in the past year was only for recurring expenses – 36% vs. 21%. A majority of those ages 23 to 29 (56%) say the help they received was for special circumstances only (vs. 32% of the younger group). 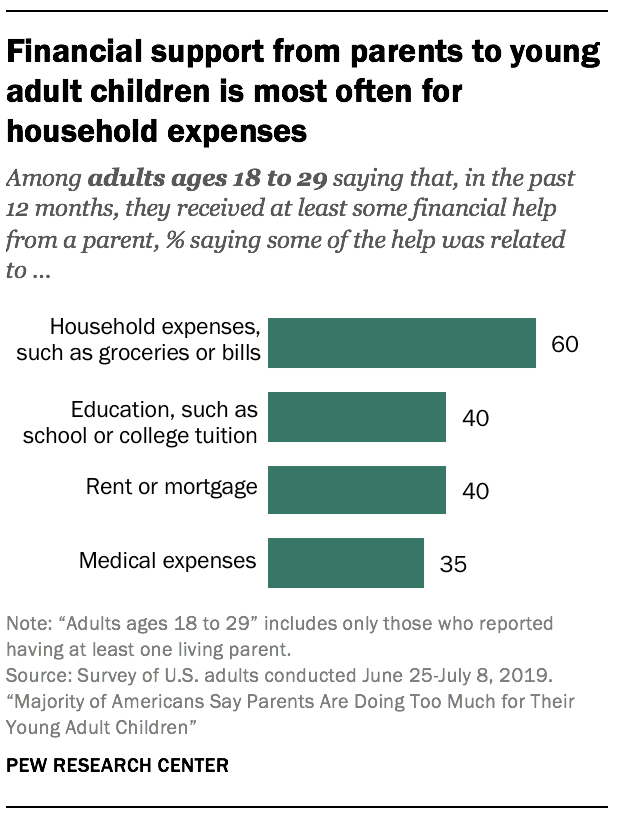 There are differences in the amount and type of financial help parents give their young adult children depending on the parents’ income. Among parents with children ages 18 to 29, those with annual household incomes of $100,000 or more are more likely to say they gave their adult children a lot of financial help in the past 12 months – 35% of these high-income parents say this compared with about one-in-four parents in other income groups.

High-income parents are more likely than those in lower income groups to say the financial help they gave was related to education. Two-thirds of parents in households earning $100,000 or more a year say the support they gave their adult children was tied to educational expenses, compared with 53% of parents with incomes between $75,000 and $99,999, and fewer than half of those earning less than $75,000. 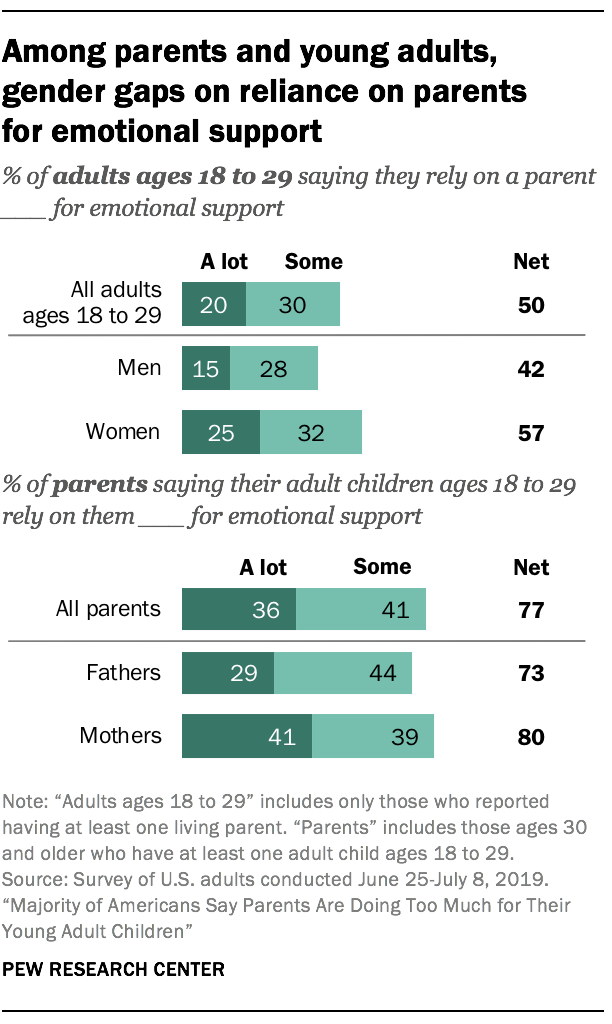 Half of young adults ages 18 to 29 say they rely on their parents a lot or some for emotional support, while 77% or parents report that their children rely on them at least somewhat for this type of support.

In their own words: In what ways would you say parents of young adults ages 18 to 29 are doing too much for their adult children these days?

“Because of how expensive our society has become and because of the desire for children to have what their parents have right away, it seems more typical for parents to continue to financially support their children for a longer period of time.” – Man, 56 years old

“After a certain point, like after the kid is done with college, I think it’s important for them to get a job and leave their parents’ house. I know a lot of people who still live with their parents – rent free – after they’re done with school and have a regular job. My opinion is that parents should encourage young adults to be more independent.” – Woman, 20

“Young adults are not able to make enough money to live independently. Many of these young adults have a great deal of debt that takes away money for housing and transportation.” – Man, 56

“Student debt and a more competitive employment market makes it much more difficult for recent college grads. Still, many parents still provide 18- to- 29-year-olds with free rent, vehicles and expensive cell phone services. Helping a young adult to ‘launch’ is understandable, but perhaps we’re too enabling, and creating a sense of entitlement to the latest, greatest goods and services.” – Woman, 60

“Things haven’t exactly worked out as planned for many of them, it’s true. Needing more help from your parents while you sort out a career or education is entirely fine and reasonable. Smart, even. But you have to be allowed to fail, too. Failing teaches you, even if the lessons are bitter.” – Man, 35

“The ways parents are doing too much fall into the realm of financial support, whether through actual monetary contributions, or services that save their children money such as providing childcare or rent-free living space. Although this may be a result of parents allowing their children to incur excessive student loans or other debt, it continues to foster a lack of accountability to live within one’s means.”
– Woman, 49

“Today’s children want everything right now. And a lot of parents are funding them and not looking out for their own retirement. Kids need to learn that they have to work hard and earn their way up the job ladder and can’t have everything given to them.” – Man, 70

While it’s taking longer to meet some milestones, young adults have seen gains in educational attainment and employment 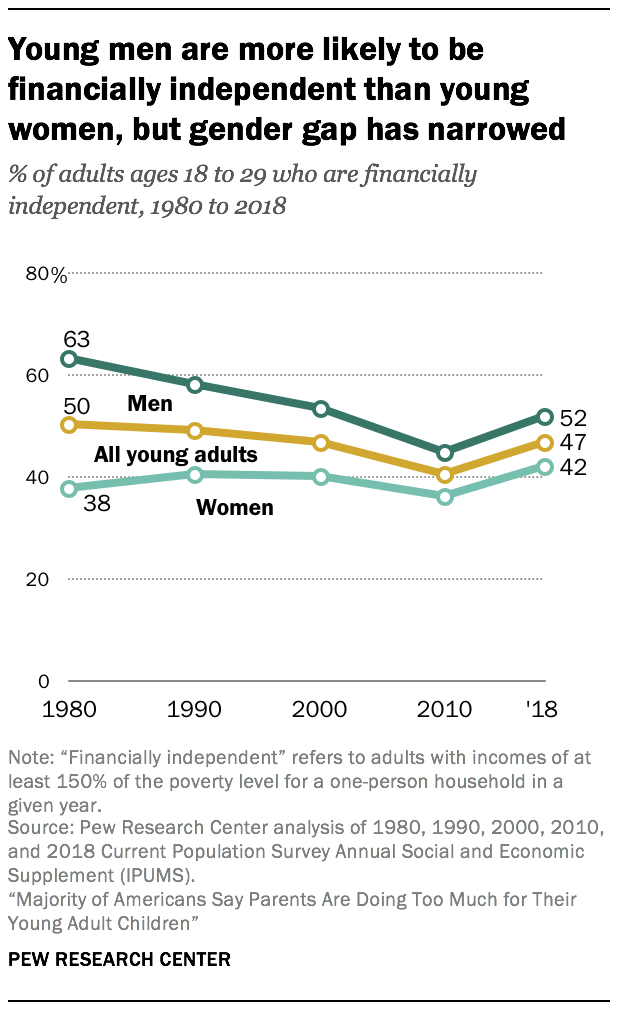 While many Americans have the impression that young adults are too reliant on their parents these days, the reality is more complicated. Young adults have made progress in terms of educational attainment, and they’ve regained some traction in the labor force during the post-recession recovery. Nearly half of young adults are financially independent, yet a rising share are living in their parents’ homes, as they are putting off marriage and the establishment of their own households. Significant gender gaps along several of these markers of adulthood have closed, with women making substantial gains in recent decades.

Median earnings also provide a window into how young adults are faring economically today compared with in previous decades. In 1980, the median earnings for all adults ages 18 to 29 working full time were $26,758; today they are $30,000. As with the trend in financial independence, the trajectory for earnings has been dramatically different for young men and young women. Young adult men have seen their median earnings increase only modestly, from $31,584 in 1980 to $32,000 today. Over the same period, young women’s median earnings have increased substantially, from $22,108 to $30,000.4

One factor that may be shifting the timeline for financial independence for some young adults is the fact that they are staying in school longer than in the past. 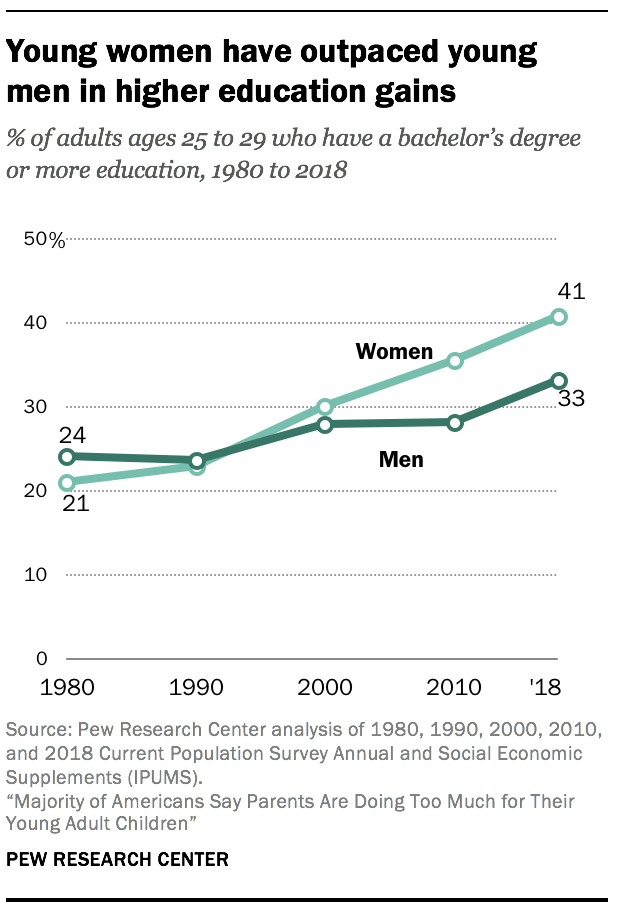 Relatedly, young adults have made significant progress in college completion in recent decades, and this is especially true of young women. In 1980, among adults ages 25 to 29, 21% of women and 24% of men had earned a bachelor’s degree. By 2018, those shares had risen to 41% for women and 33% for men, with women now outperforming men by a significant margin.

Young women have closed the employment gap with their male counterparts 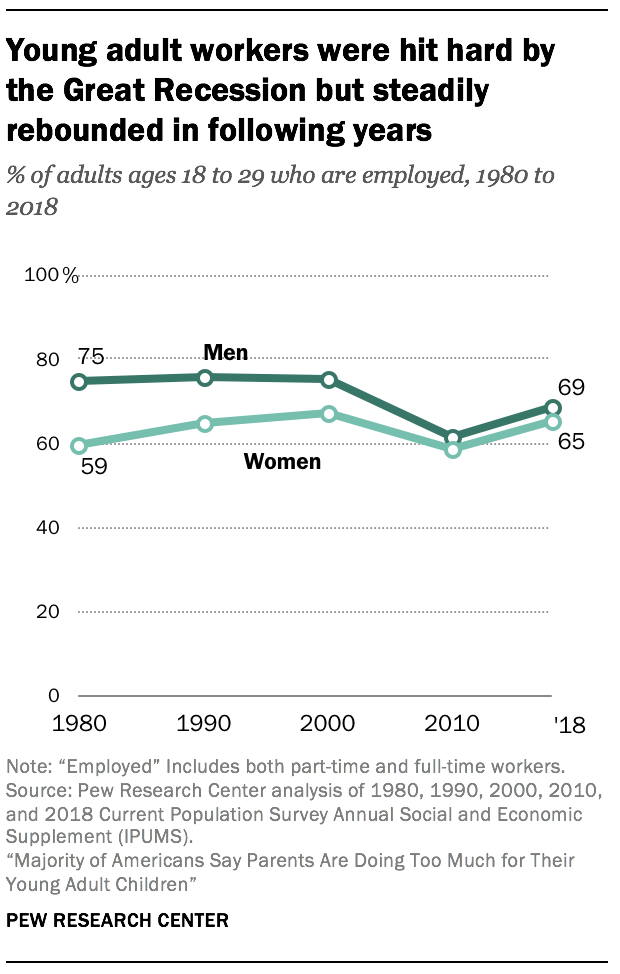 Securing gainful employment is another marker of adulthood. Overall, young adults are somewhat less likely to be employed now than they were in previous decades.

In recent years, employment opportunities have been linked to discussions of delayed adulthood, due in part to the Great Recession and its lasting impact on the labor market. The data bear this out: Between 2000-2010, young adult workers – male and female – saw fairly dramatic employment losses but were able to rebound in the following years.

Young men, especially those without a college degree, are more likely than young women to live with their parents 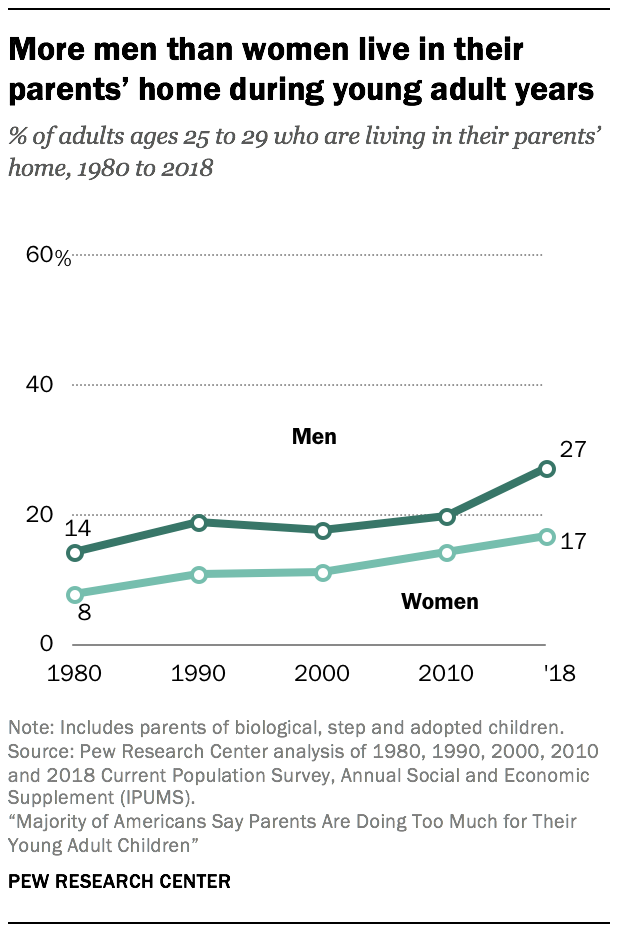 Previous research has shown that fewer young adults are establishing their own households today than in past decades. This may be attributable, in part, to the rising costs of renting and homeownership, which have been cited as a major burden for young adults, especially those who are saddled with student loan debt.

Young men without a college degree are among the most likely to be living at home, and they are also the group that has struggled the most with employment opportunities and stagnant wages.

Marriage rates for young adults have steadily declined over the past 40 years. In 1980, 42% of all young adults ages 18 to 29 were married, compared with only 18% in 2018. Being unmarried may lead to stronger financial ties between young adults and their parents. The new Center survey finds that, among 18- to 29-year-olds, those who are unmarried are much more likely than those who are married to say they’ve received financial help from their parents in the past 12 months (71% and 47%, respectively).

Relatedly, young adults are less likely to be parents today than in the past. In 2018, 70% of women ages 18 to 29 had never given birth. That share is up from 57% in 1980. This change does not mean women are not having children at all, but rather, many are becoming parents after they have aged out of the “young adult” category.