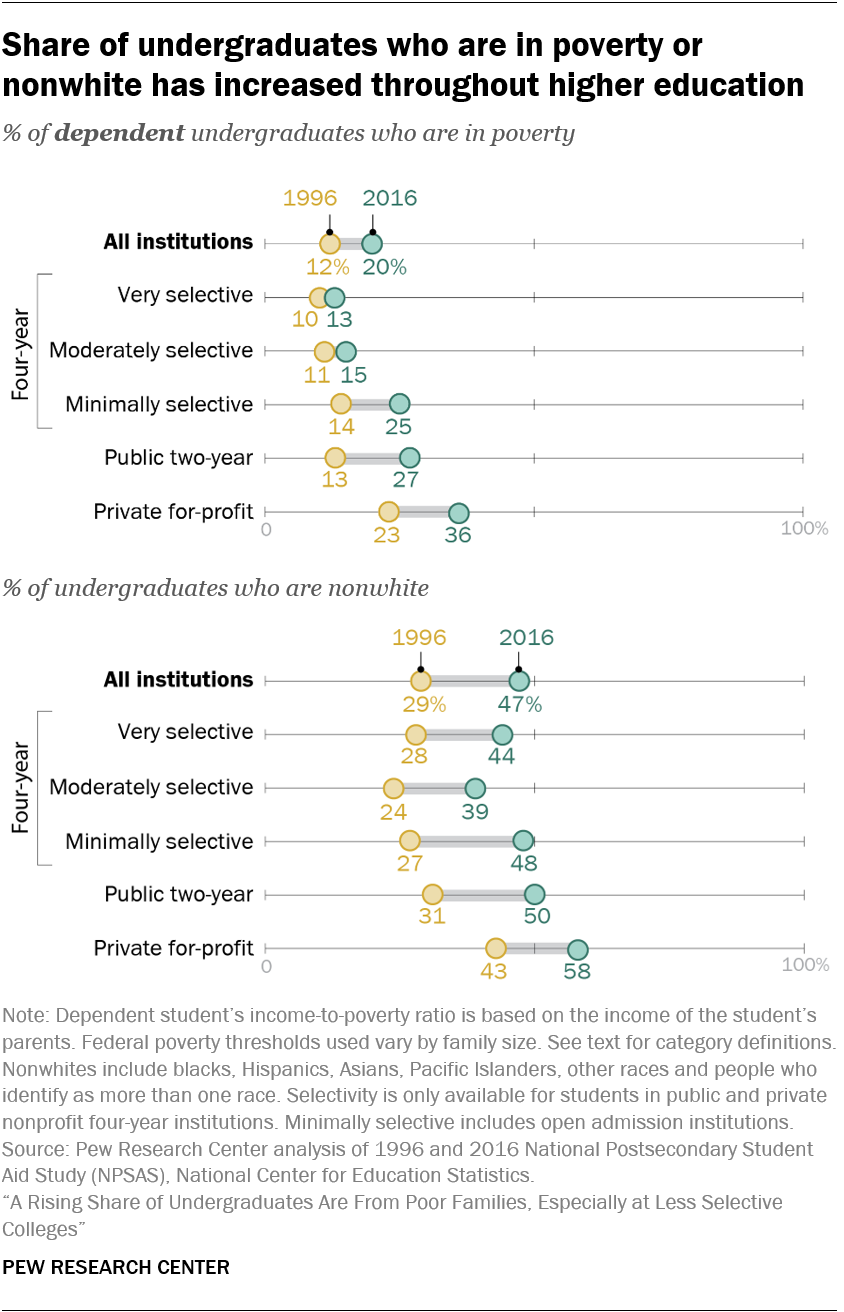 
How students’ economic situation is measured 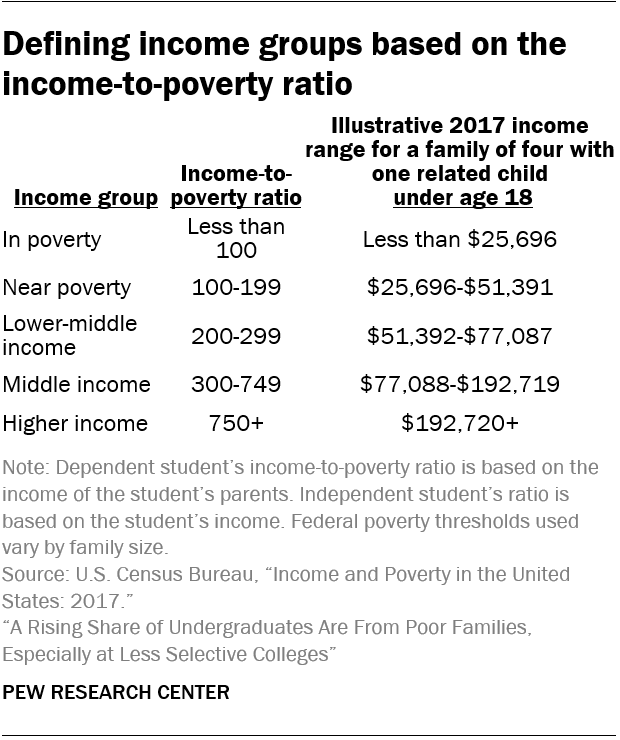 The economic background of students is based on the family income-to-poverty ratio, a common measure that has the advantage of accounting for family size. For a given income, larger families are less well-off.

Students fall into one of five income categories ranging from “in poverty” at the low end to “higher income” at the top. As an illustration, based on recent poverty levels a student from a family of four is in poverty if the family income is below $25,696, and if the income is $192,720 or higher (an income-to-poverty ratio of at least 750) then the student is “higher income.”

The rising proportion of undergraduates in poverty does not mirror wider trends in society. The official poverty rate for adults age 18 to 64 (12%) was similar in 1996 and 2016, suggesting that access to college for students from lower-income backgrounds has increased since 1996.

The increase in the share of dependent students who are in poverty has been most pronounced at private for-profit colleges, public two-year institutions, and minimally selective and open admission four-year colleges and universities. At more selective institutions, a growing share of dependent undergraduates are from higher-income families (incomes at least 7.5 times the poverty line). For poor independent students, the increase has been substantial across different types of postsecondary institutions.

The share of undergraduates who are racial or ethnic minorities has increased in all types of postsecondary institutions, reflecting at least in part the country’s changing demographics. But the change has been most pronounced in public two-year and minimally selective four-year colleges.

The analysis also finds that undergraduates today are more likely to borrow to pay for college expenses, with the greatest increase among middle- and higher-income students. In 2016, 39% of middle-income students took out a loan, similar to the borrowing rate of students in poverty (38%). The likelihood of borrowing is now mostly unrelated to income, marking a significant change from the past. Undergraduates are also significantly less likely to be employed while enrolled than in 1996. 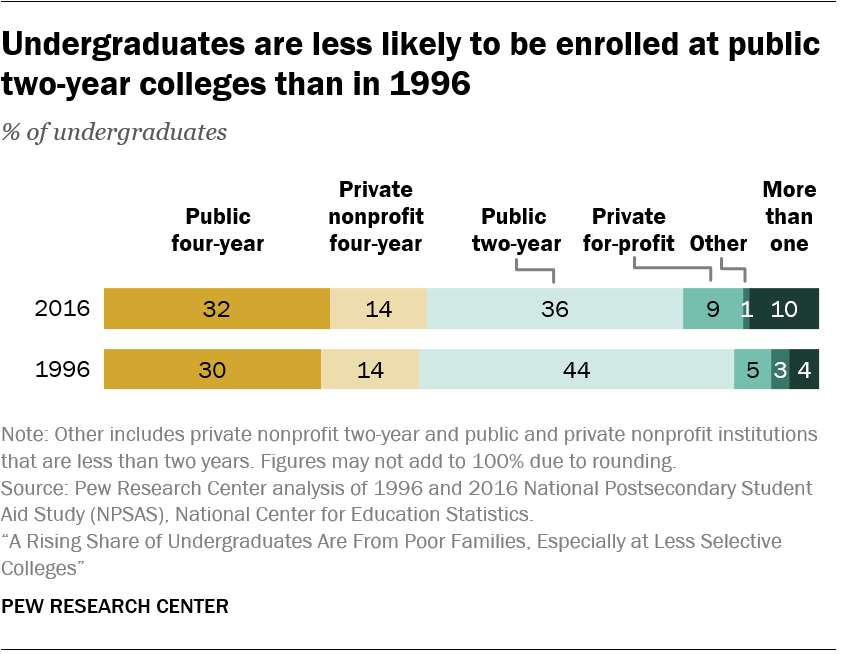 Undergraduates increasingly likely to be from families in poverty

In 2016, 20% of dependent undergraduates were from families in poverty, a sharp rise from 1996 (12%). Since poverty in the wider 18- to 64-year-old population remained flat at about 12% during these same periods, it suggests that more poor students are participating in postsecondary education than 20 years earlier.

The share of dependent undergraduates who are from higher-income families has remained at roughly one-in-ten students from 1996 to 2016. 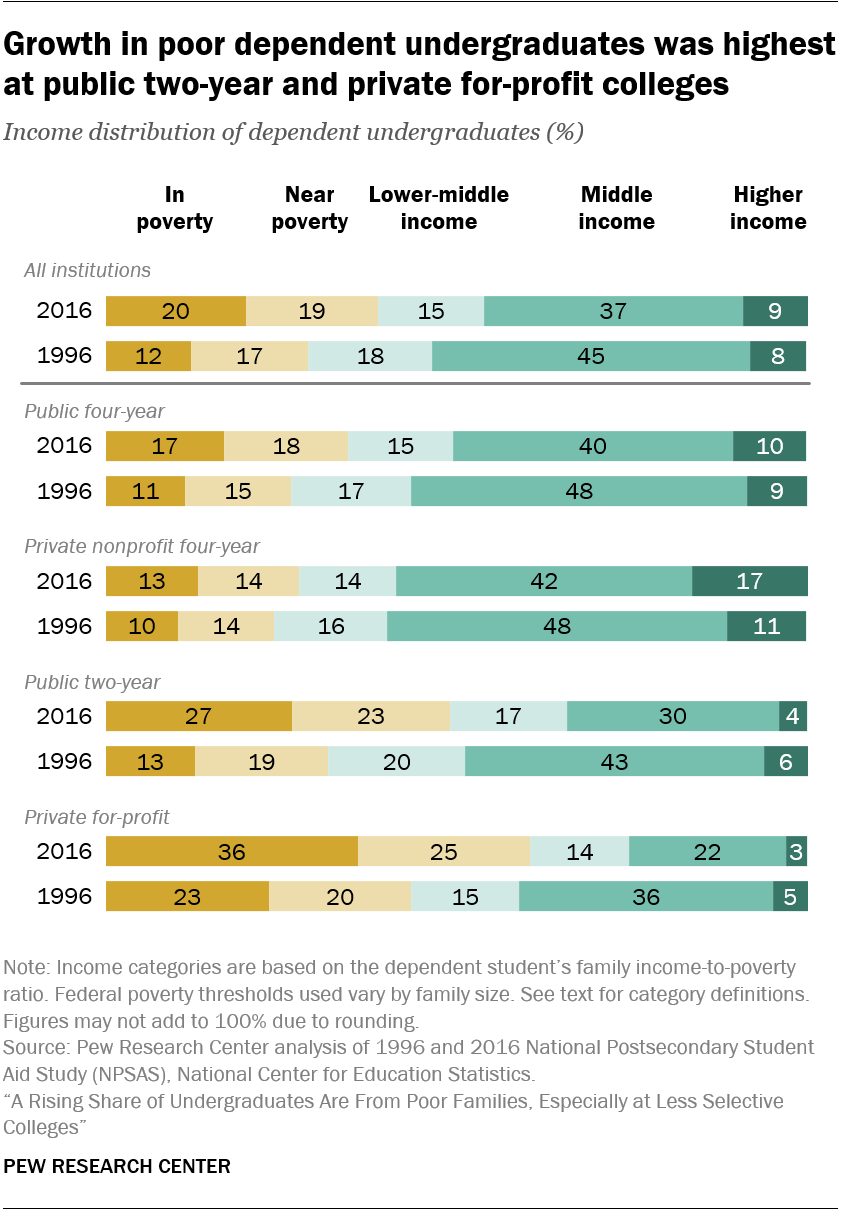 The shares of dependent students from higher-income families have remained relatively stable at public two-year and four-year colleges and at private for-profit institutions since 1996. But a larger share of dependent students at private nonprofit four-year schools now comes from higher-income families (17% in 2016 vs. 11% in 1996). 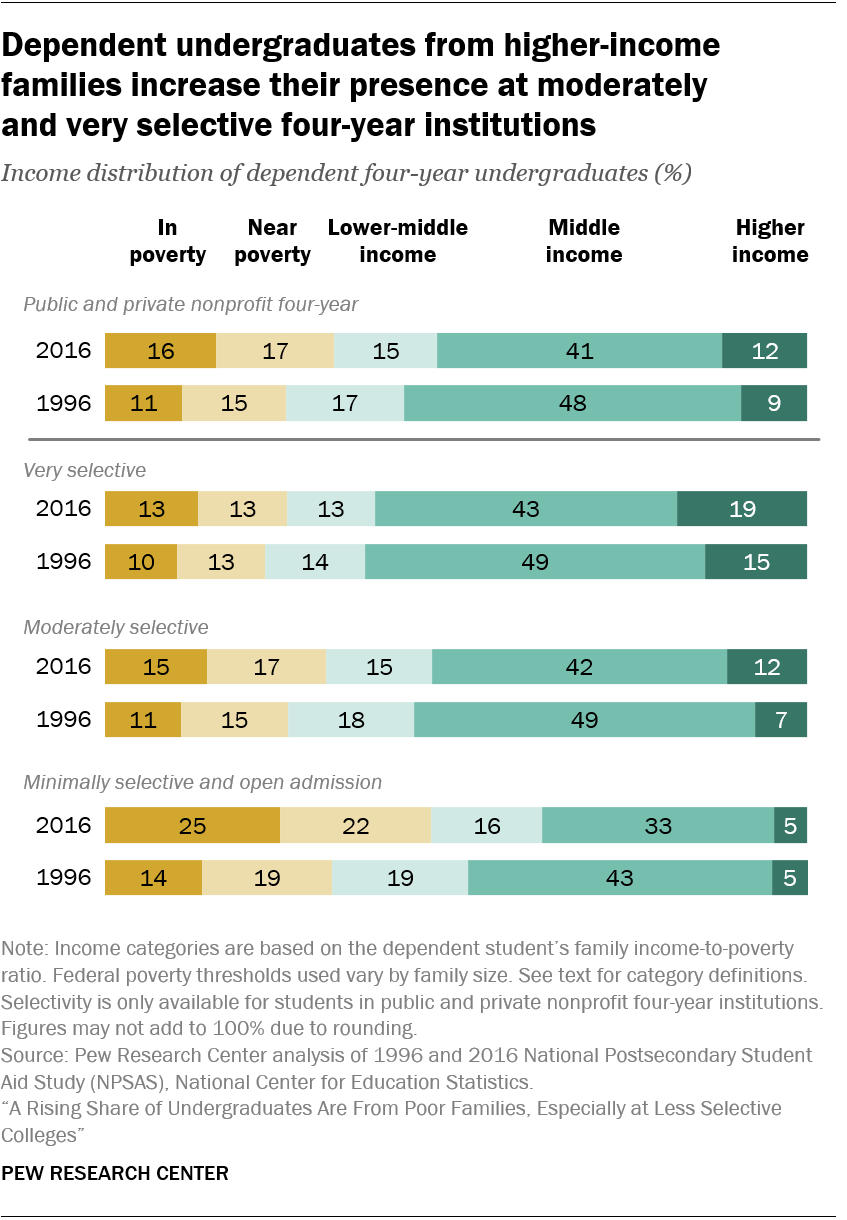 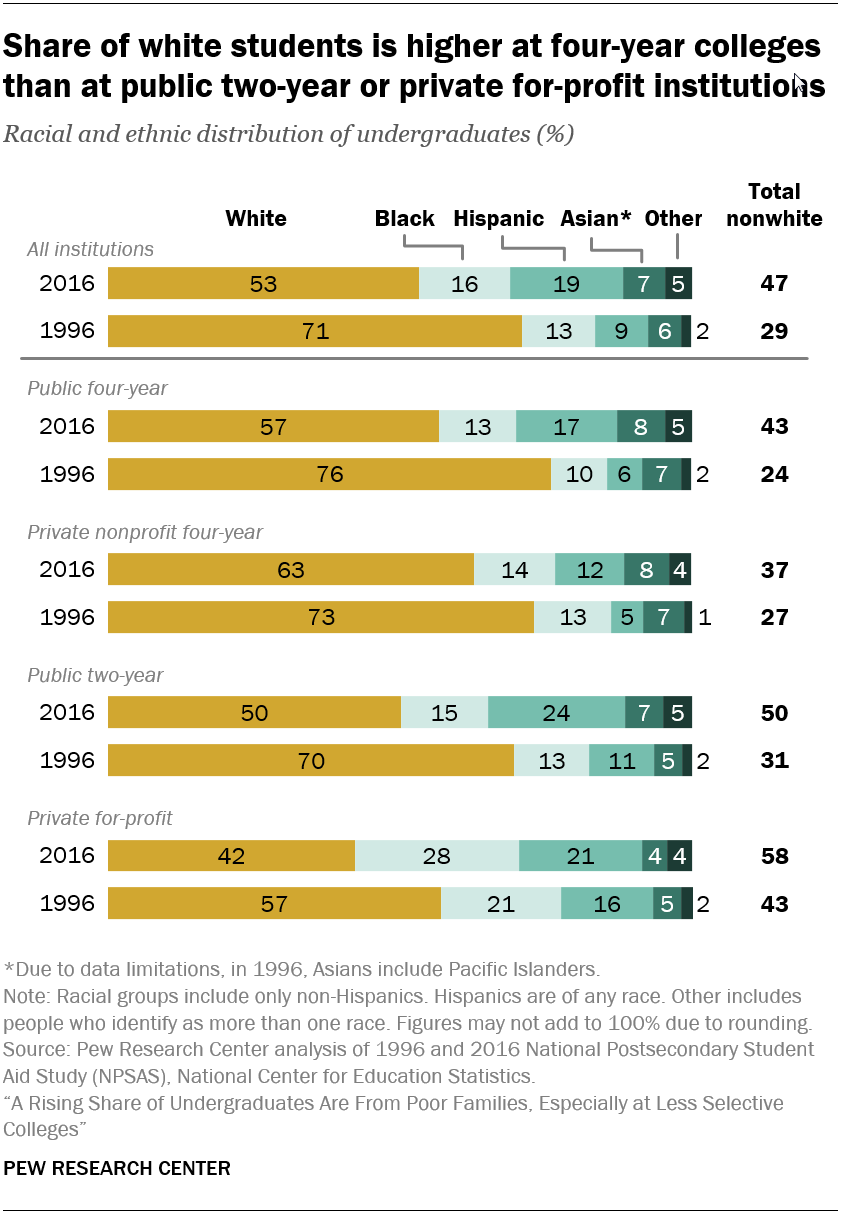 Reflecting broader changes in the U.S. population, racial and ethnic minorities are increasing as a share of undergraduates at public and private nonprofit four-year colleges and universities. The same is true at public two-year and private for-profit institutions, although whites remain the majority at four-year institutions.

The growth in the minority share of undergraduates has been greater in the less selective tiers of postsecondary education. The share of nonwhite undergraduates at community colleges and public four-year colleges and universities each increased by 19 percentage points from 1996 to 2016, but only 10 points at private nonprofit four-year institutions (from 27% to 37%). 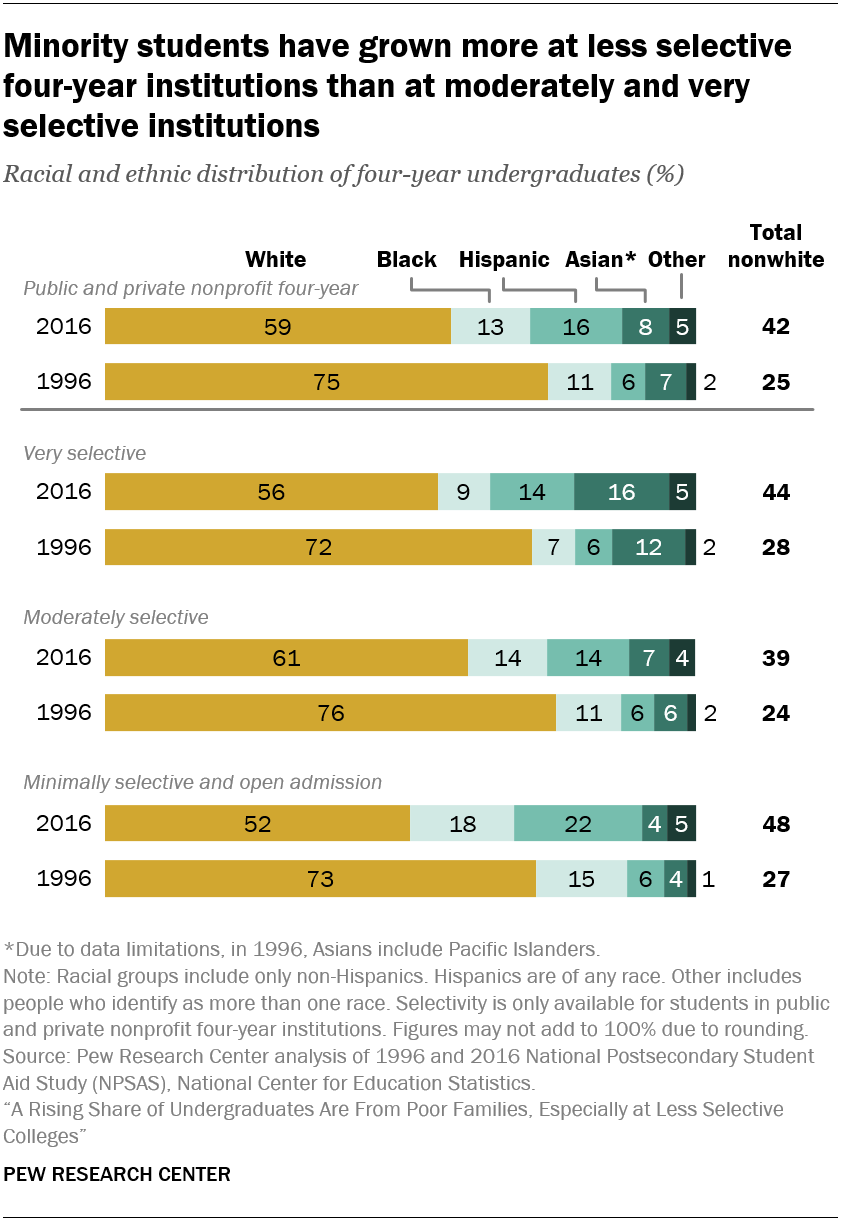 The increase in minority enrollees is partly driven by Hispanic enrollment growth. The growth of Hispanic undergraduates reflects both demographic trends and increasing educational attainment. As of the 2000 census, Hispanics became the second-largest racial and ethnic group in the overall population, behind non-Hispanic whites. It took longer for Hispanics to reach similar milestones in educational attainment. Hispanics outnumbered blacks among the nation’s public high school graduates starting in the 2007-08 academic year. The share of Hispanic youth enrolling in college has markedly increased in this century.

Hispanic undergraduate growth has been greatest at less selective tiers. The Hispanic share of public two-year enrollees has increased from 11% in 1996 to 24% in 2016 – a 12 percentage point increase.5 Their presence at private non-profit four-year institutions increased a more modest 6 points (from 5% in 1996 to 12% in 2016). 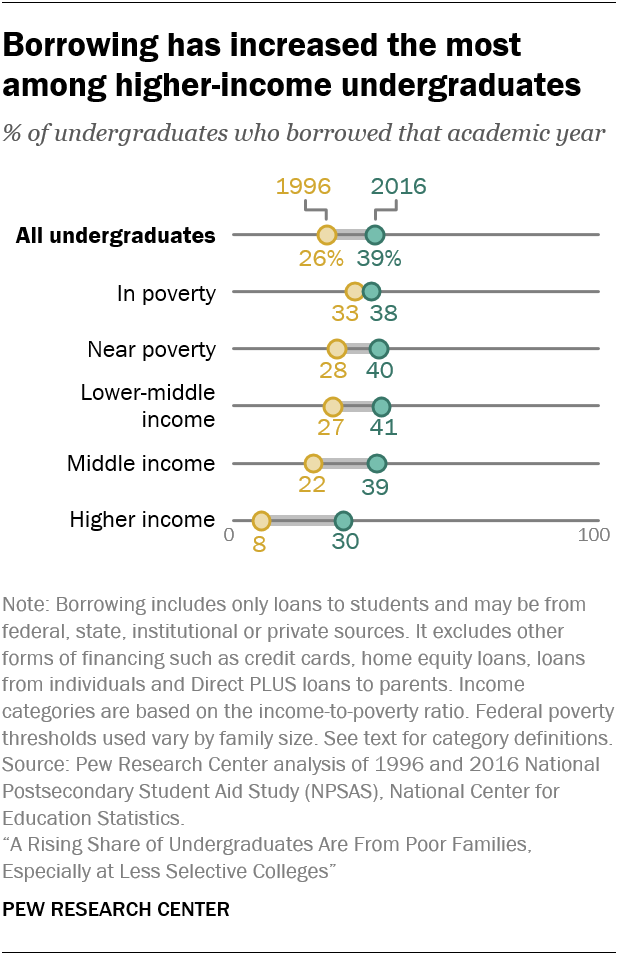 The pattern of borrowing by students has radically shifted since 1996. In 1996, students that were in poverty were the most likely to borrow (33%) and higher-income students were the least likely to do so (8%). In 2016, there was no longer a clear relationship between the likelihood of borrowing and student income: 38% of students in poverty took out loans, as did 30% of higher-income students. Middle-income undergraduates were just as likely to borrow (39%) as those who were in poverty (38%).

Students attending four-year colleges and universities are more likely to borrow than community college students. But, with the exception of students in the private for-profits, the share of students borrowing has increased by about 10 percentage points at both two-year and four-year institutions.

The analysis also finds that undergraduates increasingly are not working while enrolled. In 2016, 36% of undergraduates were not employed, compared with 20% in 2000 (comparable work information is not available for 1996). The share working full time dropped significantly, from 38% in 2000 to 25% in 2016.

Public two-year institutions are also known as community colleges. Private for-profit institutions refer to the roughly 3,400 colleges and universities that operate as businesses. Their program offerings often emphasize career preparation and have few or no general education requirements.

Public and private nonprofit four-year colleges and universities are classified as very selective, moderately selective, and minimally selective and open admission using the National Center for Education Statistics classification. This is based in part on ACT and/or SAT scores and how many students were accepted among those who applied.

In 2016, references to whites, blacks and Asians include only those who are non-Hispanic and identify as only one race. In 1996, Asians included Pacific Islanders and the Hispanic portion of this group. Hispanics are of any race. Nonwhites include blacks, Hispanics, Asians, Pacific Islanders, other races and people who identify as more than one race.

A Rising Share of Undergraduates Are From Poor Families, Especially at Less Selective Colleges
Larger shares now attend four-year and private for-profit institutions, with fewer at community collegesUndergraduates increasingly likely to be from families in povertyShare of nonwhite undergraduates has increased at all types of postsecondary institutionsStudents in poverty are no more likely to take out a student loan than other undergraduates
Acknowledgments Methodology Appendix: Additional figures