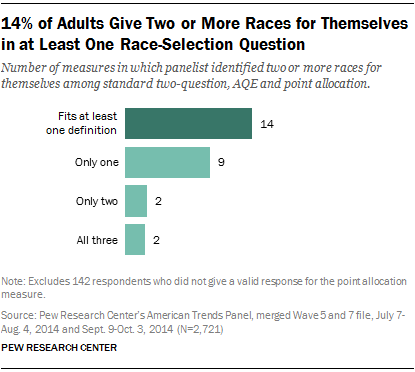 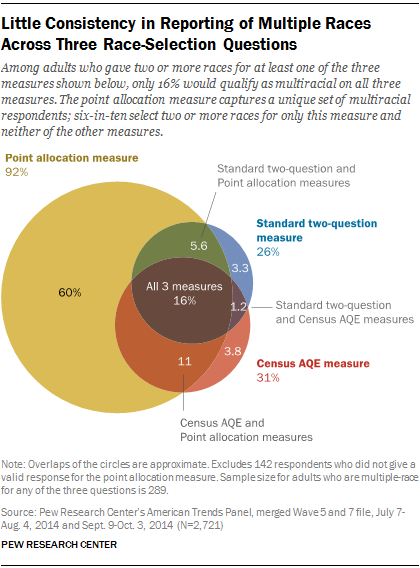 The Venn diagram to the right details the overlap and disconnect in multiple-race responses among all adults who selected two or more races on at least one of the measures. Just 16% of these adults would be considered multiracial using all three measures. A majority (60%) could only be described as multiracial using the point allocation approach, while less than 5% each would fit the definition using only the Census AQE measure or only the standard two-question measure, reflecting the greater overlap between these two approaches.

To be sure, differences in mode—in addition to question type—may be playing a role. The standard race measure was asked over the phone, point allocation over the Web and Census AQE through a mix of Web and phone modes. However, eliminating mode differences does not eliminate the unique cases within each question. For example, if analysis is limited to only respondents who answered both the point allocation and Census AQE measures via the Web, the overlapping share is similar to the overlap when the total sample is analyzed (29% and 26%, respectively). 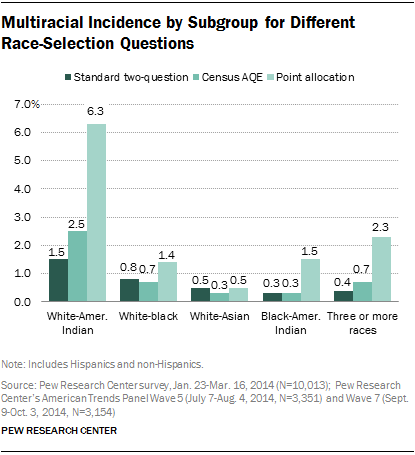 Next: Appendix A: Additional Tables
← Prev Page
Page1Page2You are reading page3Page4Page5Page6Page7
Next Page →

Who Is Multiracial? Depends on How You Ask Chapter 1: Estimates of Multiracial Adults and Other Racial and Ethnic Groups Across Various Question Formats
Chapter 2: The Consistency of Reporting Two or More Races Across Race-Selection Measures
Appendix A: Additional Tables Appendix B: About the Data References About This Report

Exploring Racial Bias Among Biracial and Single-Race Adults: The IAT