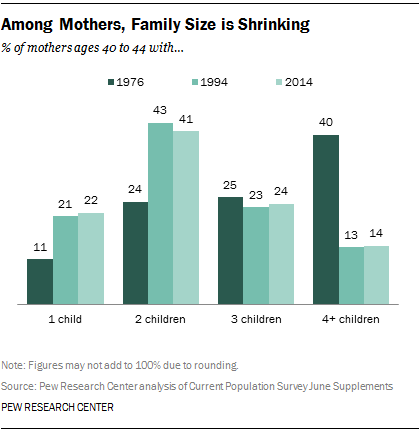 In the late 1970s, the average mother at the end of her childbearing years had given birth to more than three children. Since that time, average family size has declined, driven largely by declines in families with four or more children. Now, moms have 2.4 children on average – a number that has been fairly stable for two decades.

In 1976, four-in-ten mothers ages 40 to 44 had four or more children. One-fourth had three children, and a similar share (24%) had two children. Only 11% of mothers at the end of their childbearing years had had only one child.

Flash forward to 2014, and the situation has changed dramatically. The once-dominant four-child family has been replaced by the two-child family. A plurality (41%) of moms at the end of their childbearing years now report having two kids, while just 14% have four or more children. Meanwhile, the share of mothers at the end of their childbearing years who have one child has doubled – from 11% to 22%. As has been the case for many decades, about one-fourth of mothers have three children (24%).

Most of the change in family size occurred between 1976 and the mid-1990s. Family size since that time has remained quite stable.

Number of Children, by Educational Attainment 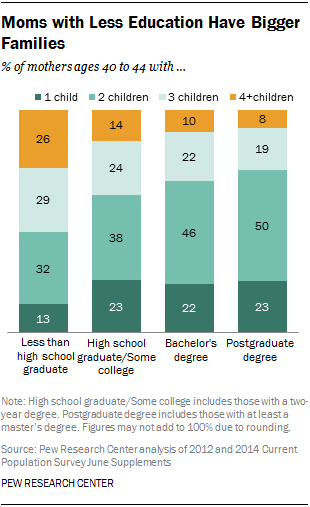 The more education a mother has, the fewer children she will have on average in her lifetime. While fertility drops somewhat with each additional level of education, the biggest fertility gap occurs between women who lack a high school diploma and those who have completed high school.

While the association of education and family size remains a strong one, in fact the educational “gap” in fertility has narrowed in the past two decades, driven in part by increases in family size among the highly educated. 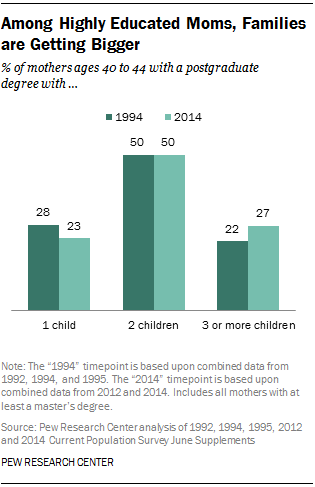 Interestingly, among mothers with a high school diploma, the share having two children has declined by 5 percentage points, down from 43% in 1994. This decline is accompanied by an increase in the share having just one child.

Fertility patterns have remained virtually unchanged since 1994 for mothers with a bachelor’s degree.

Fertility Patterns Among Mothers by Race and Ethnicity 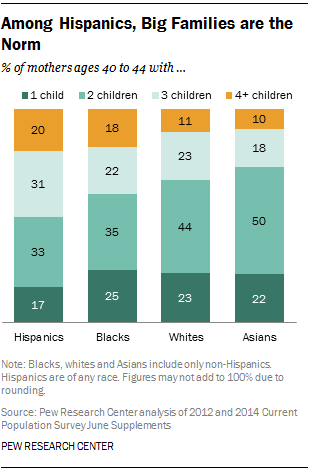 When looking at the distribution of family size by race and ethnicity, the distinctiveness of the Hispanic family becomes particularly apparent. Among mothers ages 40 to 44, Hispanics are the least likely to have only one child – just 17% do. In contrast, fully 25% of black moms have had just one child, as is the case for 23% of white moms and 22% of Asian moms.

Looking at changes in fertility over time, it’s apparent that families with four or more children are in decline for whites, blacks, and Hispanics. However, there are variations in which family sizes are “gaining ground” as very large families are on the wane. 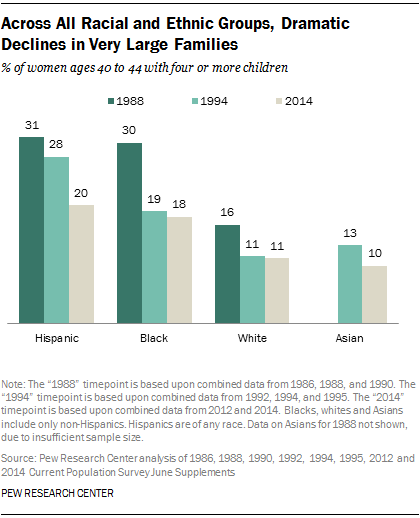 Among white mothers, the 6-point decline in families with four or more children has been totally offset by the 6-point rise in only children.

Data on Asian mothers are unavailable for 1988, but since 1994, there has been no significant change in the size of their families.

Next: Appendix A: Additional Tables
← Prev Page
Page1Page2You are reading page3Page4
Next Page →