Occupational differences are also apparent. Among young households headed by a manager or professional, 45% have some student debt. In contrast among young households headed by an individual in the other occupational category (including operators, laborers, farmers, and production/craft/repair workers) only 27% owe student debt.

Among racial and ethnic groups, young white and black households are most likely have education debt (42% and 40%, respectively), and young Hispanic households are about half as likely to owe such debt (22%).

The Assets of Student Debtors 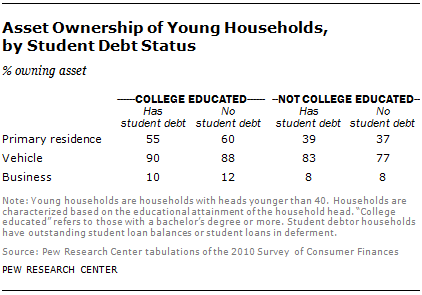 Prior economic studies have examined the relationship between student debt and ownership of assets on the basis of credit report data (Brown and Caldwell, 2013). The limitation here is that credit report data do not directly measure asset ownership, while the Survey of Consumer Finances possesses detailed information on both nonfinancial and financial asset ownership. The most recent survey does not provide strong evidence that young student debtors are less likely to own homes or cars.

Among households headed by those who do not at least have a bachelor’s degree, student debtors tend to be more likely to own a vehicle. Otherwise, there are not many differences in asset ownership between student debtors and student debt-free households.