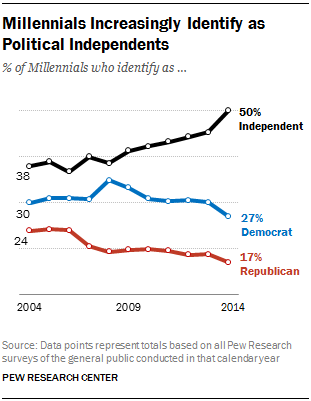 Millennials have a different relationship with politics than other generations. These young adults are less likely than previous generations to identify with either major political party. At the same time, far more Millennials lean toward the Democratic Party than the Republican Party. And they are the most liberal and least conservative of the four generations. Using Pew Research Center survey data, this chapter charts the political emergence of the Millennial generation in the past decade and highlights how they compare with Gen Xers, Boomers and the Silent generation.

Party Identification: The Rise of the Independents

While growing political polarization makes the headlines, another trend is reshaping the modern political landscape. In the past decade, the share of self-described independents with no firm ties to either party has grown in every generation, but it has increased the most among Millennials.

According to Pew Research surveys conducted in January and February of this year, half of all Millennials now identify themselves as political independents, up from 38% in 2004.

Both parties have lost ground among Millennials in the past 10 years, though Republicans have lost somewhat more ground than Democrats. The proportion of Millennials who identify as Republicans has fallen from 24% in 2004 to 17% today. Democratic identification stood at 30% in 2004, rose to 35% in 2008 when young adults rallied behind Obama, but has since fallen back to 27% in recent polls. 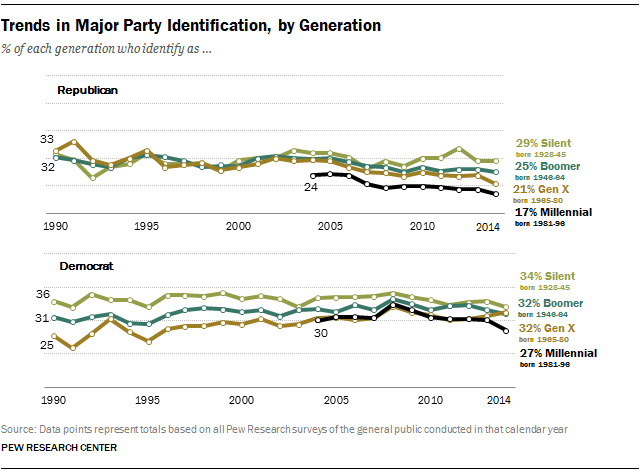 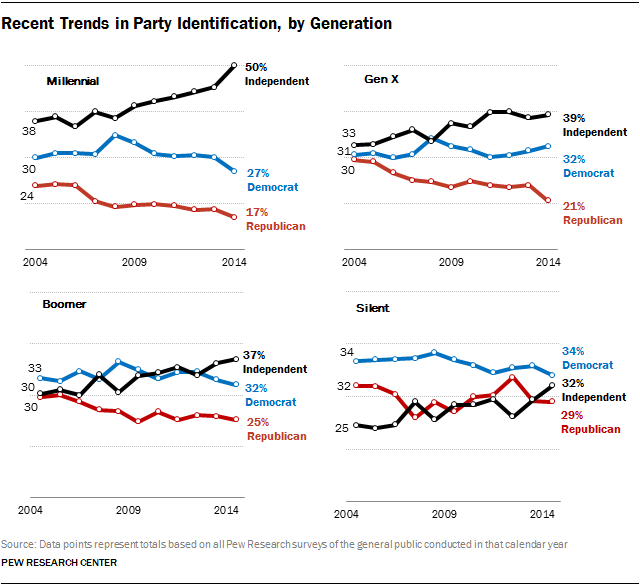 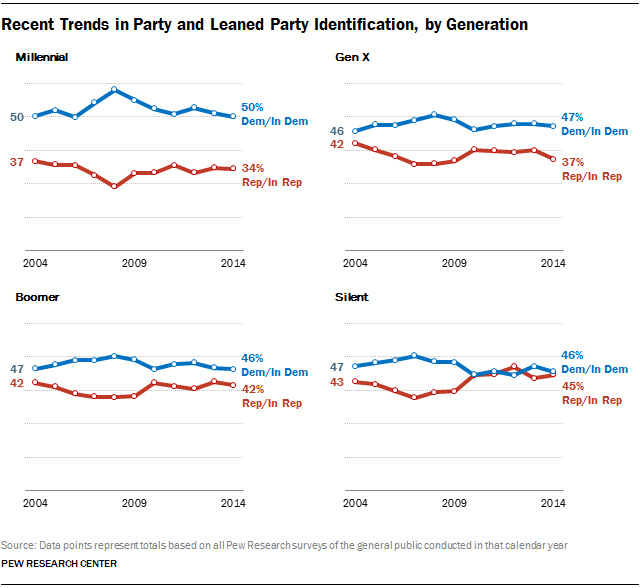 Among older generations, Democrats also have a wide advantage among Gen Xers; 47% are Democrats or lean Democratic while 37% are Republicans or lean Republican. Boomers’ and Silents’ partisan leanings are more evenly divided.

Over the past 10 years Millennials have remained the most liberal and least conservative of the four generations, and the only generation in which liberals are not significantly outnumbered by conservatives. In surveys conducted in 2014, 31% of Millennials say their political views are liberal, 39% are moderate and 26% are conservative. 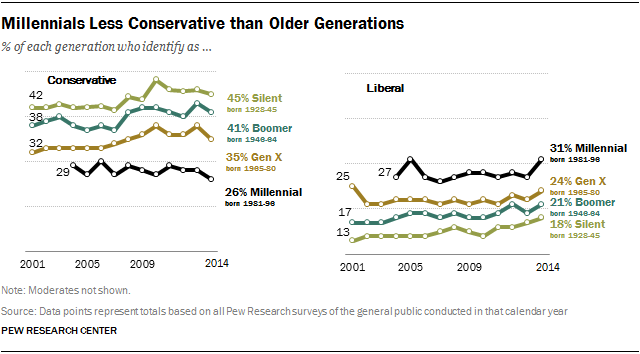 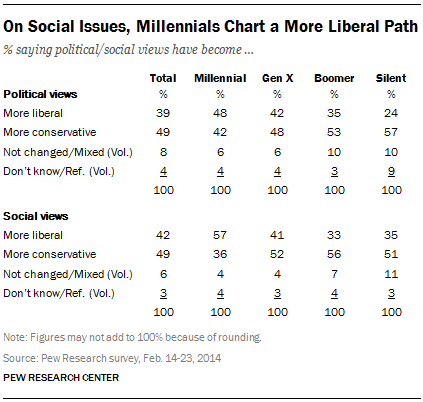 President Obama was swept into the White House in 2008 on a wave of support from young voters. Yet within six months of taking office, his job approval rating began to slide among all generations.

Among Millennials, Obama’s job approval has fallen from 70% in those first honeymoon months of 2009, his highest rating among any generation, to 49% in combined surveys from January and February 2014. The falloff has been about as steep among Silents (23 points), Gen Xers (18 points) and Boomers (17 points).

Nonetheless, Millennials have a more positive view of Obama’s job performance than do older Americans. Currently, 49% of Millennials approve of the way Obama is handling his job as president, compared with 44% of Boomers, 43% of Gen Xers and 35% of Silents. 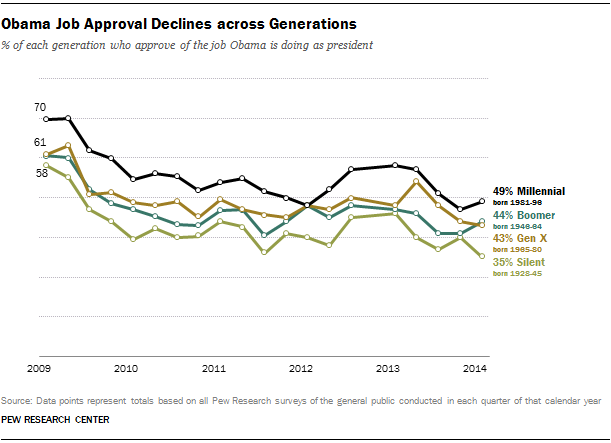 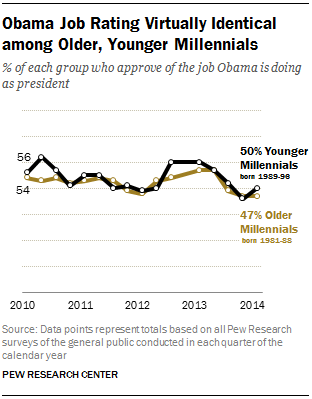 Racial Gap in Views of Obama 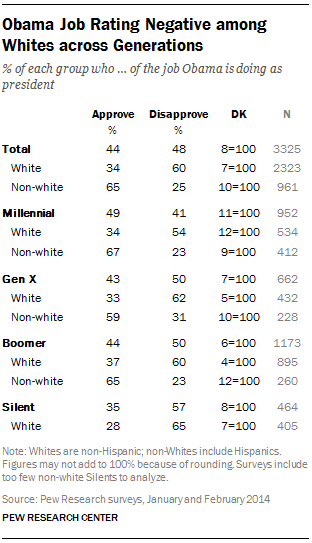 Race and age have long been factors in opinions about Obama. Obama’s higher job ratings among Millennials throughout much of his presidency have been at least partly attributable to the racial and ethnic diversity of this generation. 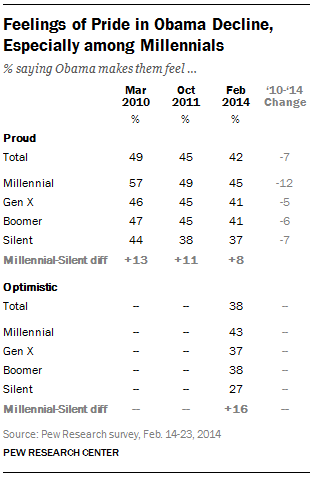 Positive personal reactions to Obama also have declined since his first term in office. Currently, 42% of Americans say Obama makes them feel proud, while 54% say this is not the case. In 2010, 49% said that Obama engendered feelings of pride and in November 2008, shortly after his election as president, 65% of voters said he made them feel proud.

Little Change in Feelings of Disappointment with Obama 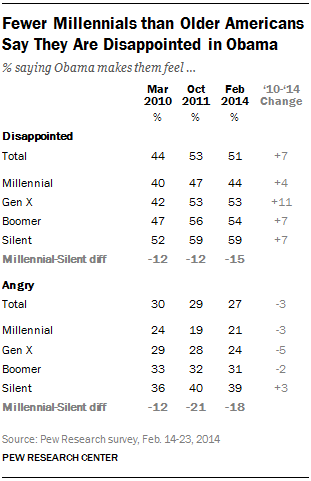 About half of all Americans (51%) say that Obama makes them feel disappointed, while 46% say he does not. These opinions have changed little from 2011, when 53% expressed disappointment with Obama.

Millennials are less likely than older age cohorts to say they feel disappointed in Obama: 44% of Millennials express disappointment with the president, compared with half or more in older generations.

Obama engenders more anger among older cohorts—Boomers and Silents—than among Millennials or Gen Xers. These views have changed little since 2010.

Personal feelings about Obama, like views of his job performance, are divided along racial and ethnic lines. For instance, while a majority of non-white Millennials (61%) feel pride in Obama, just 32% of white Millennials agree. Those differences are reflected to varying degrees across older age cohorts as well. 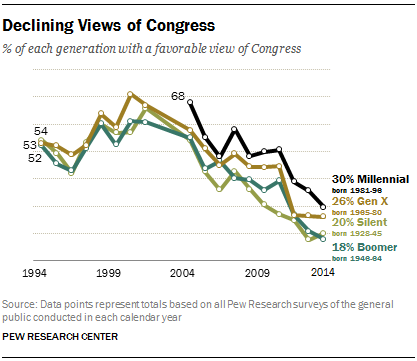 Favorable opinions of Congress have fallen sharply over the past decade across generations. Among Millennials, for instance, just 30% view Congress favorably, down from 68% in 2004.

A slightly different pattern emerges on views of the Republican and Democratic congressional leadership. Ten years ago, Millennials were significantly more likely than other generations to approve of both Republican and Democratic leaders in Congress. Today, there is virtually no difference in the share of each generation that expresses approval of either party’s legislative leadership. 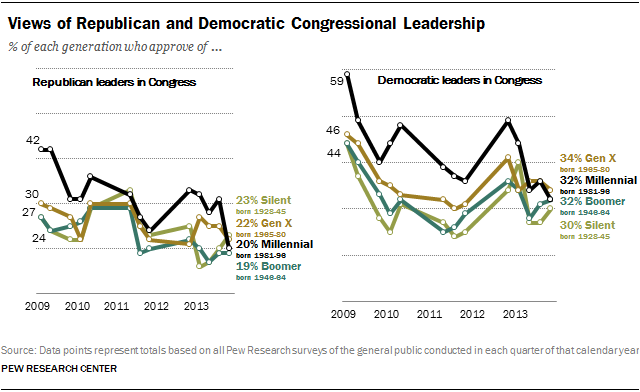 Millennials express more favorable views of the Democratic Party than do older age cohorts. But in the current surveys, Millennials’ views of the Republican Party are about the same as those of older generations. 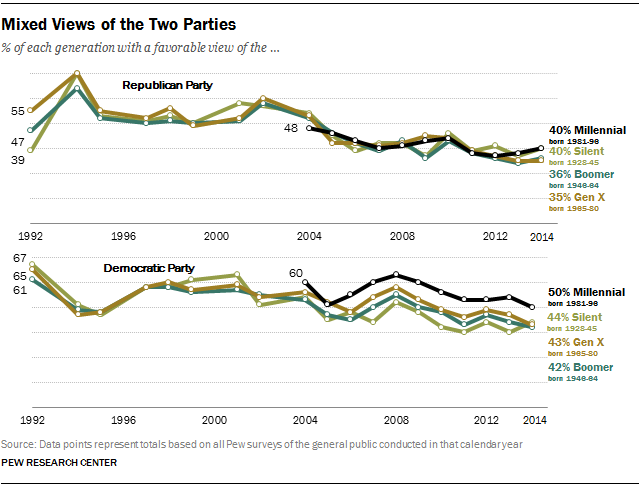 Next: Chapter 2: Generations and Issues
← Prev Page
Page1You are reading page2Page3Page4Page5
Next Page →