The lesbian, gay, bisexual and transgender population is one of the most Democratic demographic groups in the country. According to the 2012 national exit polls conducted by the National Election Pool, gay, lesbian, and bisexual adults voted for Barack Obama over Mitt Romney by more than three-to-one (76% vs. 22%).

This Democratic advantage can be seen in the partisan identification of LGBT adults, a majority of whom are Democrats. It also expresses itself in policy preferences across a range of issues, including size of government, attitudes about gun policy and immigration.

When it comes to issues of specific interest to the LGBT population, many LGBT adults say equal rights, including employment rights, marriage rights and adoption rights, should be top policy priorities. Many also say the same about prevention and treatment of HIV/AIDS. 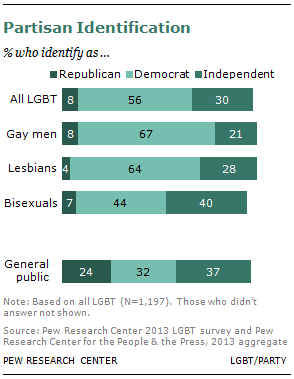 The overwhelming Democratic identification of LGBT adults is even clearer when leaned partisanship of independents is taken into account. About eight-in-ten (79%) LGBT adults are Democrats or lean Democratic, while just 18% are Republican or lean Republican.

Democratic affiliation is higher among gay men (67%) and lesbians (64%) than among bisexuals (44%). Still, about three-quarters of bisexuals (74%) identify as Democrats or lean toward the Democratic Party. 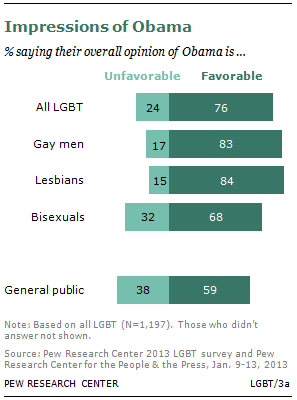 Barack Obama is viewed favorably by 76% of LGBT adults. A Pew Research Center survey in January, found that 59% of the general public viewed Obama favorably.

While Obama enjoys positive ratings across the LGBT population, gay men (83%) and lesbians (84%) are more likely than bisexuals (68%) to say they have a favorable impression.

Ratings of the Major Parties 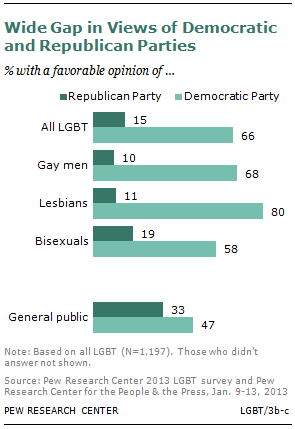 Of all LGBT adults, lesbians hold the most positive views of the Democratic Party, with eight-in-ten (80%) having a favorable opinion. About two-thirds of gay men (68%) also have a positive opinion of the Democrats, as do a smaller majority (58%) of bisexuals. 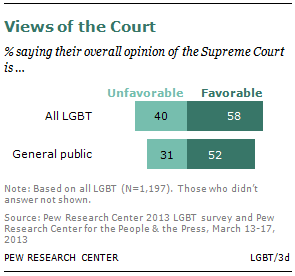 Just weeks before the Supreme Court is set to rule on two cases involving same-sex marriage, 58% of LGBT adults have a favorable view of the institution while 40% view it unfavorably, with similar views of the court among gay men, lesbians and bisexuals. These ratings are similar to the public’s views of the court.

Majority of LGBT Adults Say Country Is on the Right Track 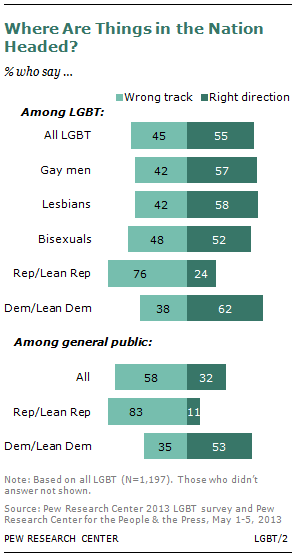 Views about the direction of the country are strongly correlated with party, as evidenced by large partisan divides on this question both within the LGBT population and the overall public. About six-in-ten LGBT Democrats and Democratic leaners (62%) have a positive view about the direction of the country; that compares with 24% of LGBT Republicans and Republican leaners.

Yet even within partisan groups, LGBT adults are more upbeat about the direction of the nation than the general public is. A narrow majority of all Democrats and Democratic leaners (53%) say the country is headed in the right direction, compared with 62% of LGBT Democrats. Similarly, although 11% of all Republicans and Republican leaners say things are going in the right direction, 24% of LGBT Republicans and leaners express this view.

What Are the Priorities When It Comes to LGBT-Related Policy Issues?

Asked in an open-ended question to name the most important problems facing the lesbian, gay, bisexual, and transgender population today, 57% of LGBT adults volunteer some aspect of social treatment. The aspects raised include: 28% mentioning discrimination, prejudice, or lack of equality; 19% citing a general lack of acceptance; 13% saying ignorance; and 7% mentioning violence or bullying. 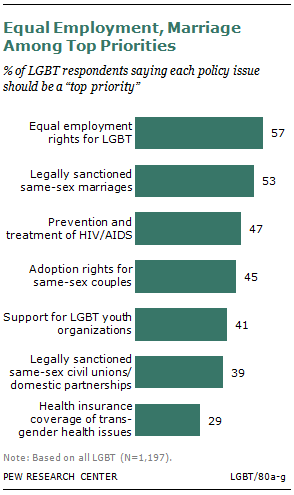 An additional 32% cite legal rights, including 15% who specifically mention the right to legally marry. The other or more general mentions of legal rights include some rights traditionally associated with marriage (such as hospital visitation rights or shared health insurance or tax benefits) as well as some statements about wanting the same rights as married heterosexual couples, even if those rights aren’t granted through marriage. 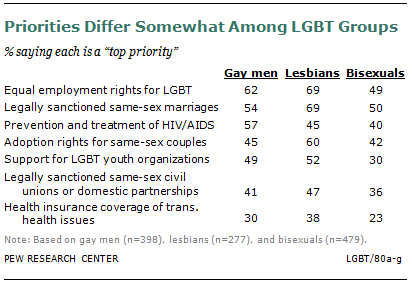 “Same as always: ignorance. We are not sexual predators. We want to enlarge, not destroy the institution of marriage. We want to live in happy families.”
– Gay man, age 68

“Privately — acceptance of self and putting so much emphasis on others acceptance of us. Publicly — the lies and fighting coming from all sides of the ‘battle.’ ”
– Lesbian, age 50

“Oppression by religious people who try to force their views about us on others. LGBT youth are committing suicide because the message in our culture is that they are garbage and have no value. We live in a country that is seeing the hatred for differences on the rise. Where religious and political parties are using fear of differences to fuel hatred and cause their followers to seek out people of differences to beat up and kill.”
– Lesbian, age 64

“Hate crimes and violence, and the fear of both of those things – they are absolutely unnecessary and uncivil.” – Bisexual woman, age 22

“People view anything different than themselves…as a threat to them and society. That is why there is such discrimination against them: marriage, adoptions, benefits, etc…”
– Transgender person, age 56

“I think that equal employment opportunity and financial benefits from marriage are among the most important issues facing LGBT individuals in society these days.”
– Bisexual woman, age 25 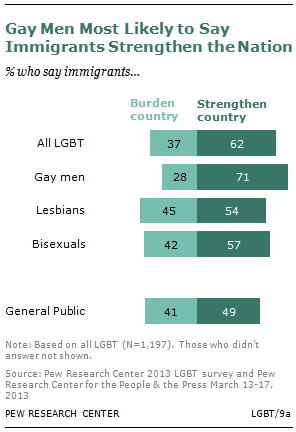 The view that immigrants strengthen the country is more prevalent among gay men than among other LGBT adults: 71% of gay men say this, compared with 54% of lesbians and 57% of bisexuals.

When it comes to views of gun control, a clear majority of LGBT adults say controlling gun ownership is more important than protecting the right to own guns (64% vs. 36%), in contrast to the nearly even split on this issue among the general public (50% control ownership, 48% protect rights). 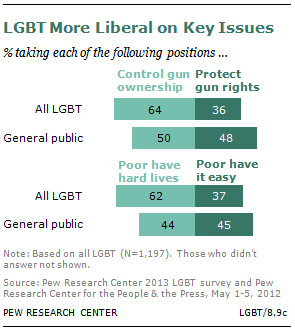 And roughly six-in-ten LGBT adults (62%) say that “poor people have hard lives because government benefits don’t go far enough to help them live decently,” while just 37% say “poor people today have it easy because they can get government benefits without doing anything in return.” By contrast, the general public is divided on this question (44% say the poor have hard lives, and 45% say they have it easy). 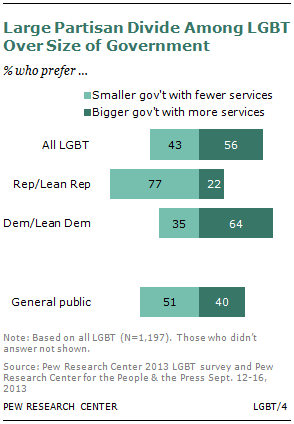 But partisan differences within the LGBT population are as pronounced as within the overall public. While about two-thirds of LGBT Democrats and Democratic leaners (64%) prefer a bigger government, 77% of LGBT Republicans and Republican leaners would prefer a smaller one. 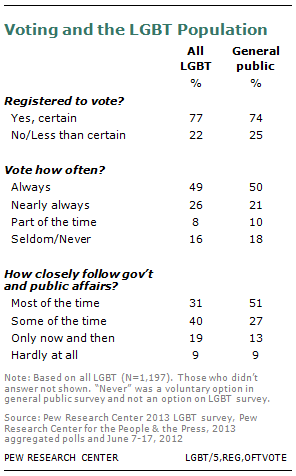 On measures of political registration and voting, the LGBT population is as politically active as the general public. About three-quarters (77%) say they are certain they are registered to vote, nearly identical to the rate among the public (74%).

As is the case among the general public, younger LGBT adults are less likely than older adults to be registered or report voting.

On a measure of attention to government and public affairs, 31% of LGBT adults report following government affairs most of the time, while 51% of the general public says this. This gap between LGBT adults and all adults holds among most age groups. However, a word of caution in interpreting this difference, since it may be attributable to differences in survey administration between the LGBT survey and general populations surveys.40