The Census Bureau’s biannual Current Population Survey November Voting and Registration Supplement is the most comprehensive data source available for examining the demographic composition of the electorate in federal elections. However, because it relies on post-election self-reporting by survey respondents in some 55,000 households, these weighted CPS estimates of turnout never match up precisely with the actual number of votes tallied in the 50 states. According to the CPS, an estimated 131.1 million U.S. citizens voted in the 2008 presidential election – slightly less than the 131.3 million votes cast for president, as reported by the Center for the Study of the American Electorate (Gans, 2008) and other sources (McDonald, 2009). 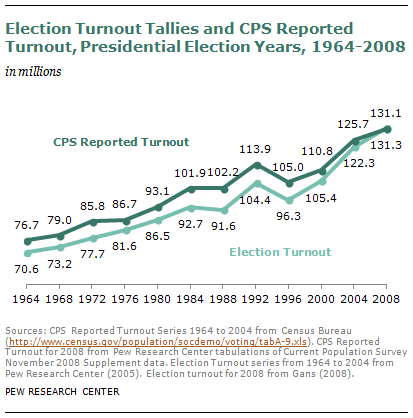 This is the first time since the Census Bureau began taking a post-election survey in 1964 that its estimate is smaller than the number of votes tallied by the states. Prior to 2008, the gap had always run in the opposite direction, with variances ranging between a low of 2.8% (in 2004) and a high of 11.6% (in 1988). Since the 1996 presidential election, the gap has narrowed steadily, and in 2008, the lines crossed for the first time.

Election experts and scholars who have examined this gap over the years have theorized that it stems, at least in part, from a tendency of some Census Bureau survey respondents to report that they had voted even if they had not (Bernstein, Chadha and Montjoy, 2001). Another possible explanation is that in every election, some small portion of ballots are improperly cast and do not become a part of the official count—but the voters who cast such ballots report to the Census Bureau that they had voted.

There is no consensus among experts to explain the recent convergence in the number of votes tallied by the states and those reported by the Census Bureau. One possibility is that there has been a decline in spoiled, uncounted ballots in recent elections. Another possibility is that there has been an increase in voting by U.S. citizens living abroad – a group that is not included in the CPS survey (McDonald, 2009). A third possible explanation is that the accuracy of the CPS itself may have improved.

The Growing Electoral Clout of Blacks Is Driven by Turnout, Not Demographics Appendix A
Appendix B
Comparing the Census Bureau's Turnout Estimate with the Reported Vote Tally