Out-of-wedlock births rose to record levels in 2007, accounting for four-in-ten of all U.S. births that year, according to newly released preliminary data from the National Center for Health Statistics.

Most Americans say that the growing prevalence of births to unwed mothers is a problem for society, but responses are more mixed — and differ sharply by generation — on the question of whether it is always wrong for an unmarried woman to have a baby, according to a 2007 Pew Research Center Social & Demographic Trends survey.

In short, there is a stronger consensus in public opinion about the social cost of out-of-wedlock births than there is about the morality of these births. 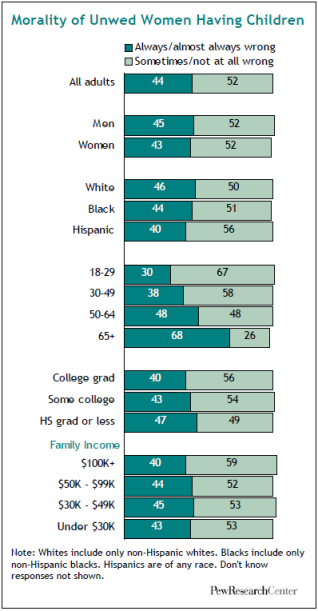 Responses are more mixed, however, on the question of whether unmarried women having children is wrong or not. A slight majority of Americans (52%) say it is wrong only sometimes (33%) or not wrong at all (19%). A quarter (26%) say it is always wrong and 18% say it is almost always wrong.

On the question of whether unmarried women having children is wrong, there are no differences by gender. But attitudes do differ by generation. Most people ages 18-49 say that births out of wedlock are wrong only sometimes or not at all. Americans ages 50-64 are evenly split on this question. And among Americans 65 and older, two-thirds say unmarried births are always or almost always wrong.

The Pew Research Center survey was conducted by telephone from February 16 through Match 14, 2007, among a randomly selected, nationally representative sample of 2,020 adults. It has a margin of sampling error of 3 percentage points.

Household and Family StructureSocial ValuesParenthoodBirth Rate and Fertility
Social Media Use in 2021
What the data says about gun deaths in the U.S.
Defining generations: Where Millennials end and Generation Z begins
Key facts about U.S. immigration policies and Biden’s proposed changes
Views on Race in America