This article was originally published in Scientific American.

Americans’ trust in medical scientists has grown since the coronavirus outbreak first upended everyday activities at workplaces, homes and schools across the nation. But there are growing divisions between Republicans and Democrats in the confidence they have in medical scientists. These partisan divides extend to perceptions of the risk posed by the novel coronavirus to public health and views on measures to control the spread of COVID-19. Nonetheless, both Democrats and Republicans are optimistic that scientific efforts to deliver a vaccine will come to fruition within a year.

The pandemic shines a spotlight on scientists — including medical scientists, public health experts and other scientific specialists — and their role advising government leaders, informing the public, working on the front lines of patient care and leading research efforts to find treatment and prevention options for the coronavirus. 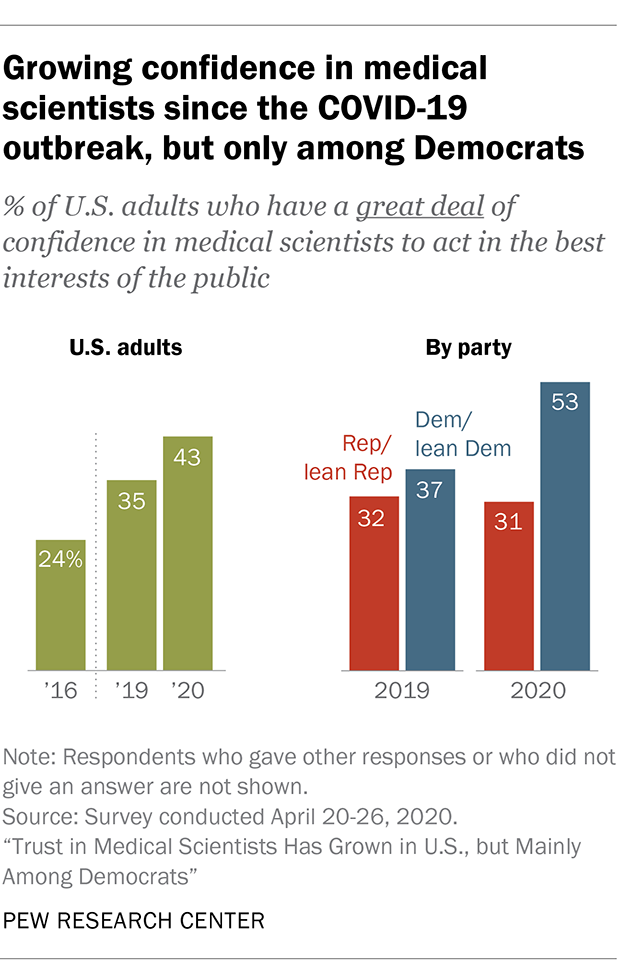 A national survey from Pew Research Center conducted in late April with more 10,000 U.S. adults finds 43% of Americans say they have a great deal of confidence in medical scientists to act in the best interests of the public, up from 35% before the outbreak. A large majority continues to say they have at least a fair amount of confidence in medical scientists.

One of the striking aspects of Americans’ initial response to the outbreak has been the degree of public support for unprecedented restrictions on public activity. For example, about nine-in-ten Americans said measures to reduce the spread of COVID-19 by imposing travel restrictions, canceling major sporting and entertainment events, closing K-12 schools and limiting social gatherings were necessary, according to a Center survey conducted March 19-24.

But public opinion has been shifting during the crisis. Pew Research Center surveys find growing partisan division over the risk the novel coronavirus poses to public health as well as over social distancing measures and restrictions on public activity aimed at slowing the spread of the disease. 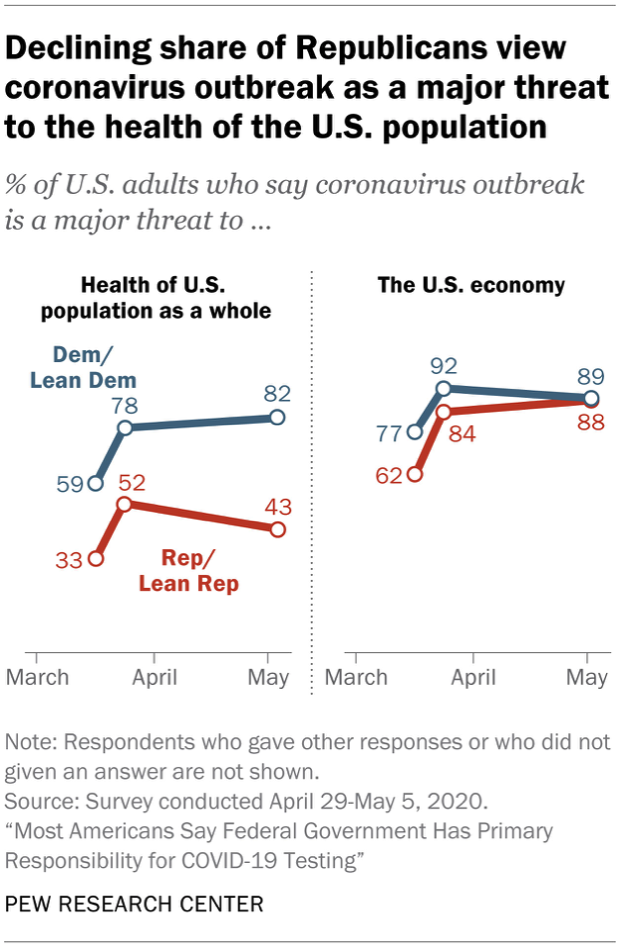 Since late March to early May, the share of Republicans who view the outbreak as a major threat to the nation’s health dropped 9 points, from 52% to 43%, while views on this issue among Democrats increased slightly from 78% to 82%. Democrats are now nearly 40 percentage points more likely than Republicans to consider the coronavirus a major threat to the health of the population.

About six-in-ten Americans (59%) view social distancing measures — which were still in place across much of the country at the time of the survey — as helping a lot to reduce the spread of the disease, although this belief is more common among Democrats (69%) than Republicans (49%). 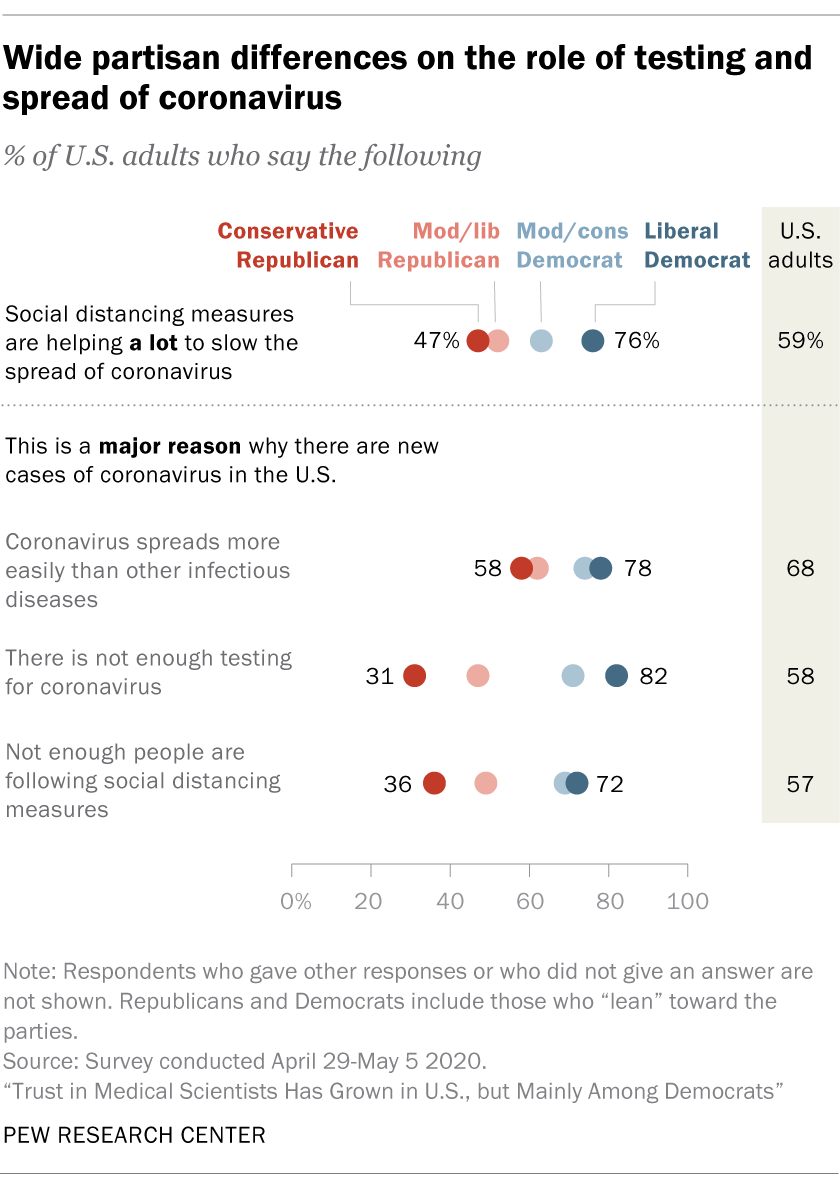 Partisan groups also differ over the reasons behind continued coronavirus infections, particularly around the roles of testing and social distancing. Three-quarters of Democrats (75%) consider too little testing a major factor behind new disease cases in the U.S. compared with 37% of Republicans. Seven in 10 Democrats believe a major reason for new cases of coronavirus is that not enough people are following social distancing measures. About half of moderate or liberal Republicans (49%) and 36% of conservative Republicans agree that this is a major reason behind new cases of coronavirus.

While partisan gaps in views of the coronavirus outbreak are common, there remain important differences of opinion within both parties, especially within the GOP. For instance, the minority of Republicans who view the outbreak as a major threat to public health are much more likely to take a cautious approach to states reopening and to view the impact of social distancing positively than their fellow partisans. 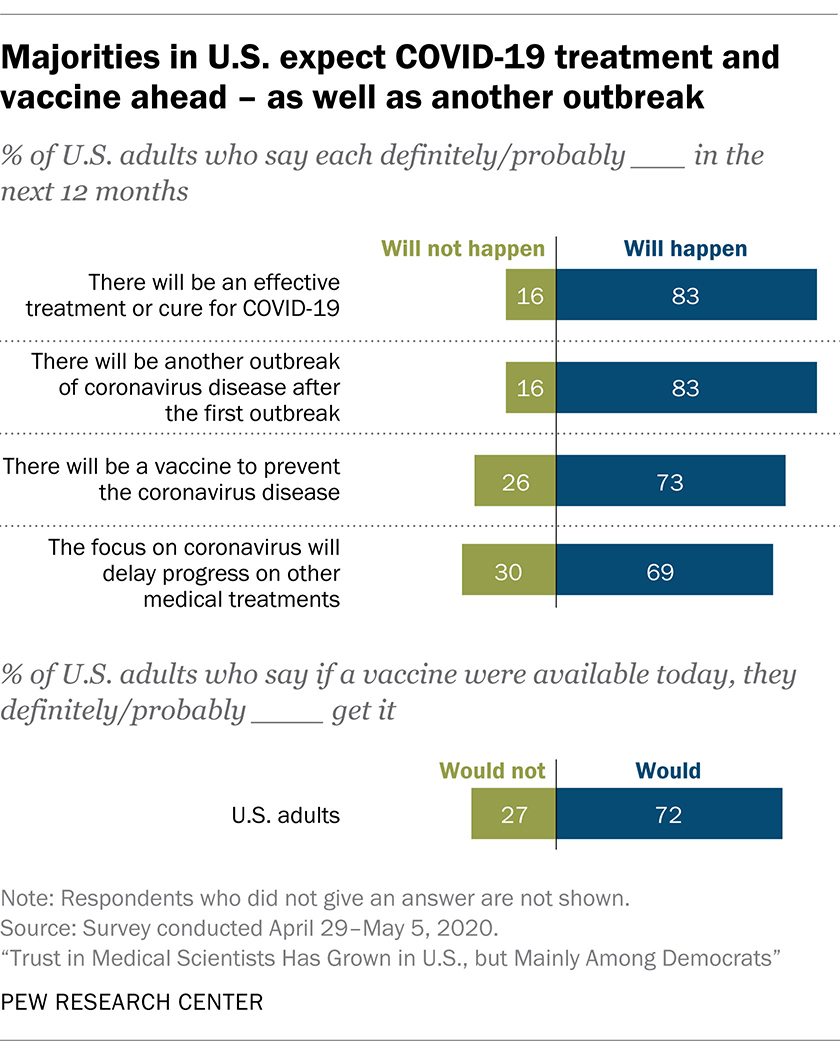