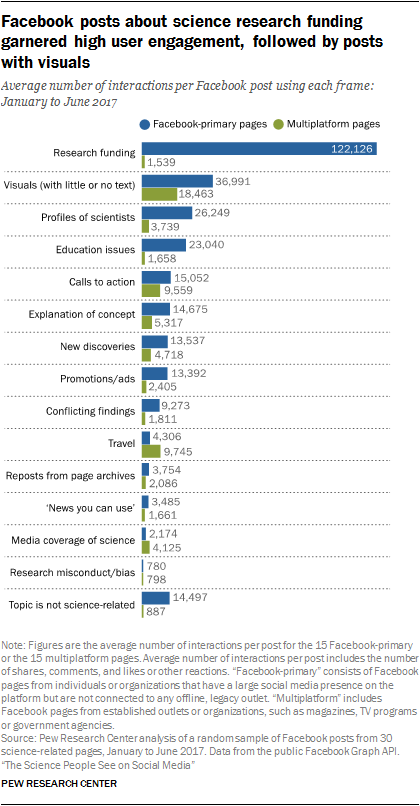 While the most common frames for posts on the 30 science-related Facebook pages in this analysis feature new discoveries or science “news you can use,” posts with more engagement – a term used to characterize the number of user interactions with a post from shares, comments, and likes or other reactions – tend to use other frames. Posts from the first half of 2017 with the highest average number of interactions per post used frames related to science research funding and pictures or other visual display with little or no text.

Posts related to science funding were typically tied to discussion of President Donald Trump’s first proposed budget in early 2017 and the potential changes for science funding. Those were topics of unique prominence during the study period, January to June 2017. Only 1% of posts in the sample from these 30 pages used a frame centered on science research funding. Audience interaction with such posts was high, however, particularly on Facebook-primary pages. 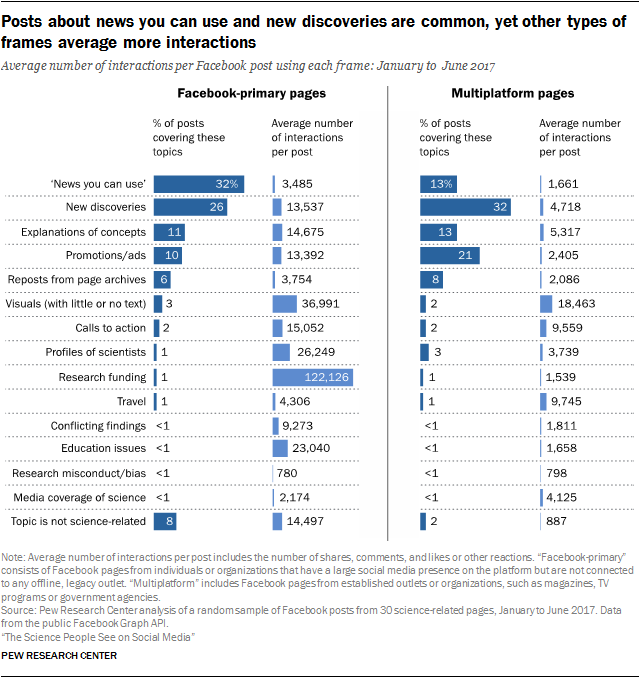 Many of these highly engaging posts linked to stories suggesting Trump was considering a decrease in science-agency funding. For example, a Jan. 25, 2017, IFLScience post called Trump’s Freeze On EPA Grants Leaves Scientists Wondering What It Means was shared more than 22,000 times on Facebook and had 62,000 likes and other reactions.

Beyond posts with a research funding frame, those consisting solely of a visual display (using little or no text) and those with a call to action were also highly engaging. Visual posts could cover a range of topics; some used videos with almost no text while others were picture-based. Call to action posts include those that explicitly requested that users engage with the post, such as asking users to provide a caption for a photo or share the post with others.

Overall, posts from the 15 Facebook-primary pages averaged a higher number of interactions than posts using the same frame among the 15 multiplatform pages. Two exceptions were posts using a travel frame and those related to media coverage of science. For these frames, audience engagement was higher, on average, for posts from the multiplatform pages. Travel posts were more common on the National Geographic and Discovery pages; many of these posts included photographs of scenic destinations such as Vancouver and the cliffs of Ireland.13

The reasons behind the generally higher interactions with posts on the Facebook-primary as compared with the multiplatform pages are not clear. There may be systematic differences in the way these pages use each frame, which impacts audience engagement. Exploration of such differences goes beyond the aspects examined in the current study.

Facebook pages with more followers likely yield more interactions in large part because more users generally see posts from those pages in their news feeds. However, users who do not follow a given page may also encounter the same content. Any time a user interacts with a post, that post may appear in the news feed of their friends, even of those who do not follow the page.

Facebook uses proprietary algorithms to determine which posts show up in a user’s news feed. Facebook has made numerous changes to its algorithms over the years, and these changes affect the level of engagement posts receive. It is hard to evaluate the impact of changes in the algorithms because Facebook does not disclose the full details of the proprietary algorithms that drive the content users see. This study was conducted in 2017, prior to a major 2018 announcement by Facebook’s CEO Mark Zuckerberg of further changes to its algorithms, giving more weight to content from friends and family over that of news organizations and other content providers that are not individuals. 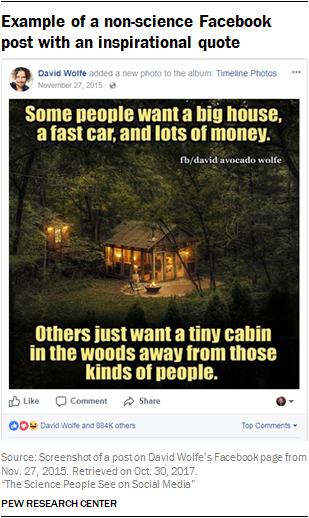 Posts categorized as topically unrelated to a scientific domain were listed in this study as using a non-science frame. As with most other types of frames, non-science posts across the set of 15 Facebook-primary pages averaged higher levels of audience engagement than did those using the same frame from multiplatform pages. For Facebook-primary pages, these posts received an average of about 14,500 interactions each – putting the category in the middle-of-the-pack compared with other frames. For multiplatform pages, however, non-science posts averaged less than 900 interactions each, lower than for any other frame used. These types of posts made up 8% of posts on Facebook-primary pages, compared with just 2% of multiplatform pages. One example of a highly engaging post of this sort featured an inspirational quote; this post from David Wolfe’s page on Nov. 27, 2015, was shared more than 1.3 million times and received more than 29,000 comments. As shown in a nearby table, this post was one of the top 15 most-engaging posts across any of the 15 Facebook-primary pages between January 2014 and June 2017.

As discussed in Chapter 1, these 30 Facebook pages tend to focus on just one or two scientific topics or domains. The average interaction with posts was not strongly correlated with the topic area of the post. See Appendix for details.

The most popular individual posts on these science-related pages used a variety of frames, and many included video and were produced by just a few Facebook accounts

A close examination of the top 15 most engaging individual posts from this set of 30 science-related Facebook pages in the last few years (Jan. 1, 2014 to June 30, 2017) finds that these posts represent a variety of science topics and frames. While the average interactions for posts using a visual-only frame and call-to-action frame tend to be higher than posts with other frames, there are posts in the top 15 with the most engagement from a wide range of frame types, including posts that explain scientific concepts, highlight new discoveries and feature ways people can put science information to use in their lives.

Video is a common feature among many of these Facebook posts with the highest levels of user engagement. Among posts appearing on the multiplatform pages between January 2014 and the end of June 2017, 12 of the top 15 most-engaging posts included video. Six of top 15 posts appearing on the Facebook-primary pages during this period also included video, while another 6 from this set of pages included a prominent picture.

National Geographic produced the greatest share of the top 15 most-engaging posts among the multiplatform pages (11 of the 15). Most of these included videos of animals such as a Sept. 8, 2016, video of Alpine goats climbing a mountain. 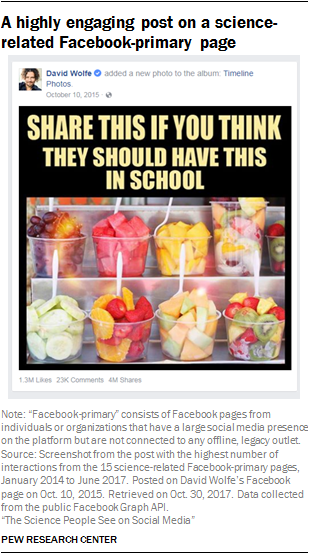 The single post with the highest number of interactions for multiplatform pages during this time period was picture of the Eiffel Tower posted on Nov. 14, 2015, in response to terror attacks in Paris. This post from National Geographic on a non-science topic included the hashtag #lovetoParis and had more than 1.1 million likes and other reactions, 182,000 shares and 9,600 comments.

Among the science-related Facebook-primary pages, 12 of the top 15 most engaging posts were produced by David Wolfe, an author and product spokesman who emphasizes alternative remedies and promotes the health benefits of raw foods.14 Half of these 12 popular posts from David Wolfe featured inspirational sayings or advice, such as an April 2015 post which encouraged readers to “look after your friends.”

The single post with the most interactions (5.4 million in total) was a call for participation. The post – produced by David Wolfe on Oct. 10, 2015 – featured a picture of fruit cups and a request that users should “share this if you think they should have this in school.”