Respondents to the Pew Research Center survey read the following statement: “New developments are creating the possibility of using synthetic blood substitutes to increase the oxygen level in a person’s bloodstream, giving them increased speed, strength and stamina. Right now, this man-made substitute for blood is being developed for people with some kind of illness or medical condition. But in the future, a transfusion with this kind of synthetic blood substitute could be developed for use by healthy individuals, giving people a much improved ability to complete all sorts of tasks with much greater speed, strength and stamina.”

New developments in biochemistry are creating the possibility of using a synthetic blood substitute (sometimes referred to as “super blood”) to significantly boost people’s oxygen levels in the bloodstream. With the synthetic blood substitute, a higher concentration of oxygen would be carried from the lungs to the muscles through the bloodstream and could significantly improve an individual’s physical speed, strength and stamina. This, in turn, could allow people to function in extreme conditions, or to simply perform everyday tasks with greater ease.

Synthetic blood is currently being developed mainly to help stem blood shortages for patients in need of a transfusion (see “Human Enhancement: The Scientific and Ethical Dimensions of Striving for Perfection” for more on the science behind this type of human enhancement). But the Pew Research Center survey addresses a different possibility – that synthetic blood could be used to give healthy people enhanced physical abilities. The full description of the scenario presented to survey respondents is republished in its entirety in the accompanying sidebar.

Most Americans appear skeptical about the idea of using synthetic blood substitutes in this way. For instance, most U.S. adults say they would be at least somewhat worried about this idea, and most people say they would not want to use such a product themselves. And similar to the other types of human enhancement discussed in this report, there are wide differences in views by religious commitment level, as well as by religious affiliation. Again, those who are highly religious are more likely to express the concern that this technology would be an unacceptable way of interfering with nature.

This chapter dives deeper into public views about the prospect of synthetic blood substitutes that would give healthy people much improved physical capabilities. 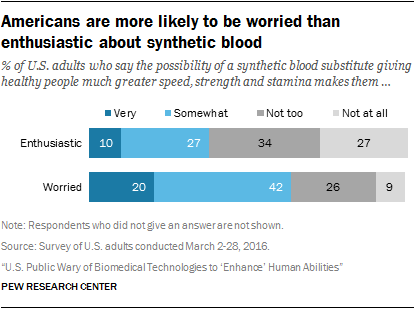 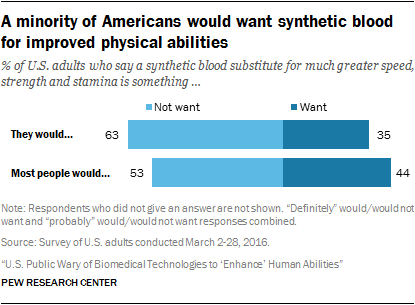 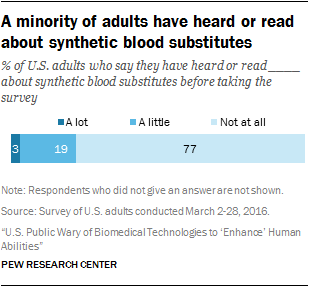 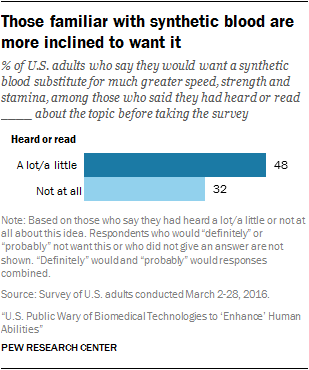 The idea of “blood doping” – which uses a variety of techniques to boost oxygen levels, including the injection of substances such as erythropoietin and the removal and re-injection of one’s own blood – has been a topic of concern in professional sports. But when it comes to synthetic blood substitutes, a large majority of respondents (77%) say they had heard nothing at all about the idea of using this to boost physical abilities before taking the survey.

Among those who have heard at least a little about synthetic blood, nearly half (48%) say it is something they would want for themselves. This is larger than the share of those who had previously heard nothing about this technology who say the same (32%). A similar pattern is seen on all three types of human enhancement discussed in the survey.

Majorities across religious commitment categories would not want blood substitute 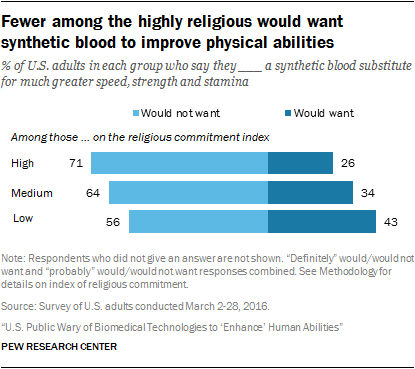 Majorities of all major Christian groups say they would not want to use a synthetic blood substitute that would give them greater speed, strength and stamina. This includes roughly two-thirds of black Protestants (66%), white Catholics (68%), white mainline Protestants (69%) and white evangelicals (69%).

The religiously unaffiliated, overall, also lean toward not wanting a synthetic blood substitute (57% would not want it, vs. 42% who would). But atheists and agnostics are more narrowly divided over whether they would want this technology. By contrast, those who say their religion is “nothing in particular” fall clearly in the “would not want” camp. 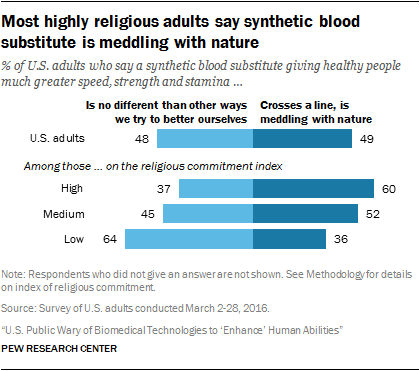 The U.S. public overall is closely split between those who say using synthetic blood to increase speed, strength and stamina would be no different than other ways humans try to better themselves (48%) and those who say it is meddling with nature and crosses a line that should not be crossed (49%).

Most of those who display a low level of religious commitment (64%) say synthetic blood is similar to other ways humans try to better themselves. But the balance of opinion is flipped among those who are highly religious. Six-in-ten highly religious people (60%) say the use of “super blood” meddles with nature and crosses a line that should not be crossed, while 37% say the technology is no different than other methods of human enhancement.

There is wide variation of opinion on this question across religious groups. At one end of the spectrum, most white evangelical Protestants (64%) and white Catholics (60%) believe that a synthetic blood substitute would cross a line that should not be crossed. By contrast, 77% of self-described atheists and 72% of agnostics say synthetic blood is no different than other ways of humans have sought to better themselves over the years.

Much like the general public, white mainline Protestants, black Protestants and Hispanic Catholics are all closely divided on this question.

Many Americans unsure about morality of synthetic blood; more say it is morally unacceptable than acceptable 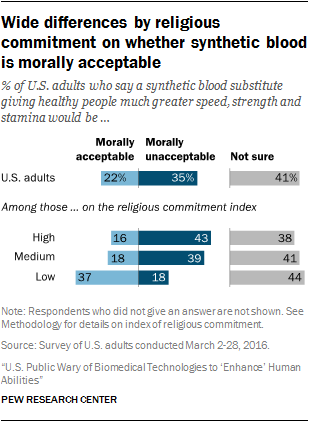 Americans overall are more likely to find synthetic blood morally unacceptable (35%) than to find it acceptable (22%). But much like reactions to the morality of the other types of human enhancement explored in this survey, a substantial share of U.S. adults – in this case, a 41% plurality – say they are not sure about the moral implications of using synthetic blood to give healthy people improved physical abilities.

But at the same time, large shares of many groups say they are not sure about the morality of this potential technology. For instance, 58% of black Protestants are unsure about whether synthetic blood would be morally acceptable.

By contrast, fully half of atheists (53%) say using synthetic blood would be morally acceptable, while just 11% say it would not be OK. And agnostics are twice as likely to say this type of human enhancement would be acceptable (35%) vs. unacceptable (17%); however, about half of agnostics (48%) are not sure about this.

The 35% of Americans who say synthetic blood would be morally unacceptable were also asked to explain why they feel this way. The most common concerns were that blood substitutes would disrupt nature and cross a line (25%), that this technology would be a form of trying to “play God” or that blood is religiously sacred (20%), and that blood substitutes seem unnecessary, especially for healthy people (17%). 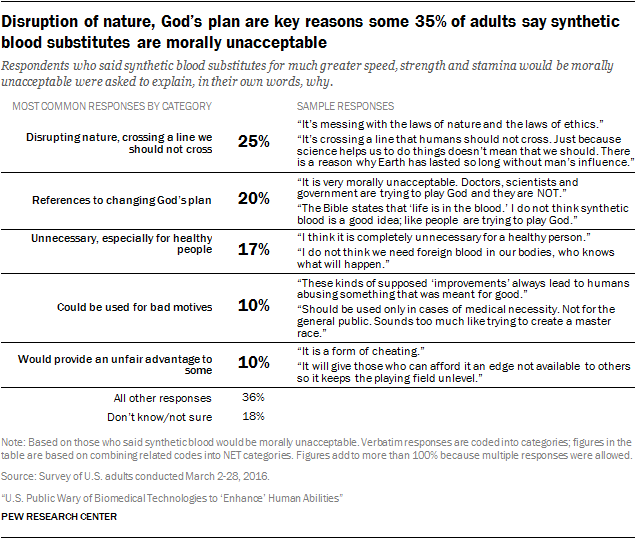 Among the one-in-five U.S. adults (22%) who say synthetic blood substitutes for healthy people are morally acceptable, a quarter explained their reasoning by linking the technology to a broader, positive idea of human progress. Others (19%) said this type of enhancement is OK because it is similar to other kinds of enhancements that are already available, while 16% cited its potential positive effect on society. Some 12% of adults who see synthetic blood as morally acceptable said free choice and each person’s control over their own body explains their perspective. 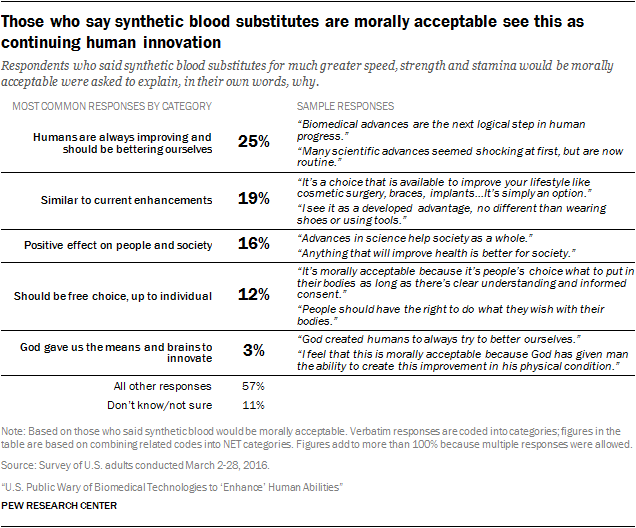 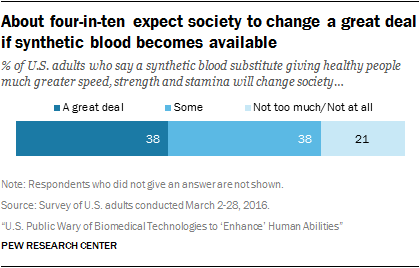 Fully three-quarters (76%) of U.S. adults anticipate at least some change to society should a synthetic blood substitute become available to enhance the physical abilities of healthy people. This includes equal shares of people who say society will change “a great deal” and those who say there will be just “some” change (38% each). 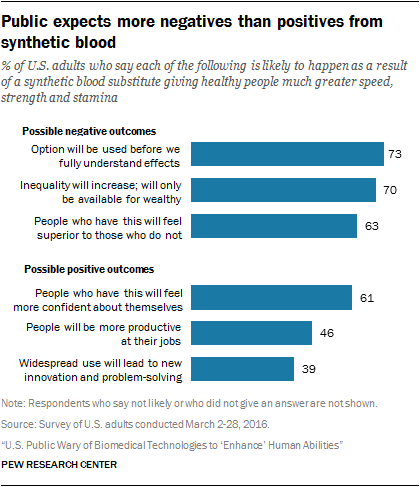 In general, U.S. adults are more likely to expect negative, rather than positive, outcomes as a result of using “super blood.” Some 73% say it is likely that synthetic blood will be used before the effects are fully understood. And 70% say it will increase inequality because this technology will be available only for the wealthy.

At the same time, most adults think those who have this synthetic blood substitute will feel more confident and better about themselves (61%). But fewer think synthetic blood will lead to greater work productivity (46%) or new innovation (39%). 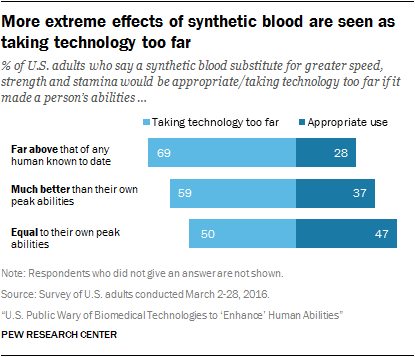 On all three types of human enhancement mentioned in the survey, there is a pattern that the more extreme the effects of the hypothetical new technology, the less acceptance there is of that technology. When it comes to using synthetic blood to increase speed, strength and stamina in healthy people, Americans are closely divided on whether this is appropriate or “taking technology too far” if the blood substitute were to make a person’s abilities equal to their own natural, peak abilities. 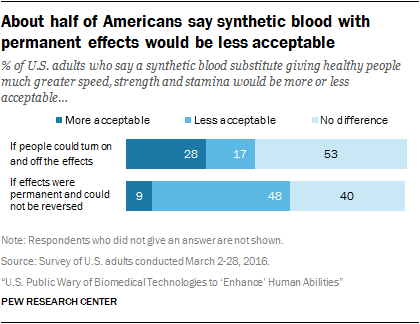 The amount of human control over the effects of synthetic blood also plays a role in how acceptable people find the idea. In a scenario in which the technology would be controllable – that is, the recipient could turn the effects of the synthetic blood on and off – 28% of adults say the technology would be more acceptable to them. Just 17% say this would be less acceptable in their eyes, and most respondents say it makes no difference (53%).

By contrast, if the effects of a synthetic blood transfusion were permanent, a plurality of U.S. adults (48%) say this option would be less acceptable. 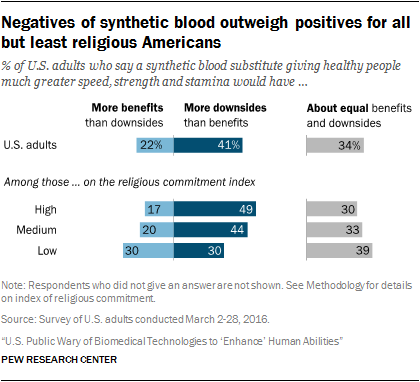 After considering the possible effects and outcomes of using a synthetic blood substitute for healthy people, a plurality of U.S. adults (41%) conclude that this technology would ultimately have more downsides for society than benefits. About a fifth (22%) say there would be more benefits than downsides, and a third (34%) judge that the pros and cons would be about equal.

Within every major Christian group, more people express the opinion that using a synthetic blood substitute to boost a healthy individual’s speed, strength and stamina would have more downsides for society than say the benefits would be greater. Among white evangelical Protestants, for example, fully half (52%) say downsides would be more prevalent, while just 14% say benefits would win out.

Even among the religiously unaffiliated, the balance of opinion falls toward the downsides outweighing the benefits (34% vs. 26%).

However, there are stark differences between atheists and those who say their religion is “nothing in particular.” Among atheists, 42% expect synthetic blood to bring more benefits for society than downsides (compared with the 19% who say downsides will win out). By contrast, among those who say they have no particular religion, those figures are roughly flipped: 44% expect the downsides to outweigh the benefits and 20% say society will experience more benefits than downsides with this technology in play.