This report is drawn from two surveys conducted as part of the American Trends Panel (ATP), created by Pew Research Center, a nationally representative panel of randomly selected U.S. adults living in households. Respondents who self-identify as internet users and who provided an email address participate in the panel via monthly self-administered web surveys, and those who do not use the internet or decline to provide an email address participate via the mail. The panel is being managed by Abt SRBI. 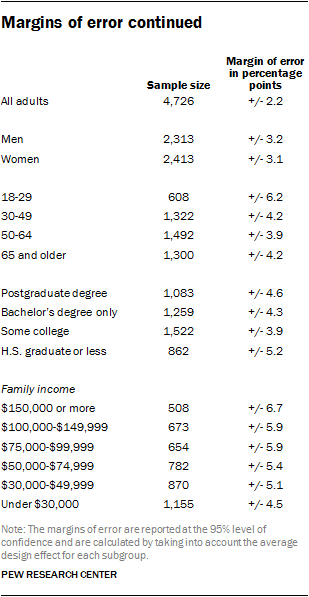 The ATP data were weighted in a multistep process that begins with a base weight incorporating the respondents’ original survey selection probability and the fact that in 2014 some panelists were subsampled for invitation to the panel. Next, an adjustment was made for the fact that the propensity to join the panel and remain an active panelist varied across different groups in the sample. The final step in the weighting uses an iterative technique that matches gender, age, education, race, Hispanic origin and region to parameters from the U.S. Census Bureau’s 2014 American Community Survey. Population density is weighted to match the 2010 U.S. Decennial Census.

Telephone service is weighted to estimates of telephone coverage for 2016 that were projected from the January-June 2015 National Health Interview Survey. Volunteerism is weighted to match the 2013 Current Population Survey Volunteer Supplement. Internet access is adjusted using a measure from the 2015 Survey on Government. Frequency of internet use is weighted to an estimate of daily internet use projected to 2016 from the 2013 Current Population Survey Computer and Internet Use Supplement. It also adjusts for party affiliation using an average of the three most recent Pew Research Center general public telephone surveys. Sampling errors and statistical tests of significance take into account the effect of weighting. Interviews are conducted in both English and Spanish, but the Hispanic sample in the American Trends Panel is predominantly native born and English speaking.

Some data in this report are also drawn from the April wave of the same panel, conducted April 5-May 2, 2016 among 4,685 respondents (4,207 by web and 478 by mail). The margin of sampling error for the full sample of 4,685 respondents from the April wave is plus or minus 2.2 percentage points. Sample sizes and sampling errors for subgroups in this wave are available upon request.

Focus groups. Pew Research Center conducted a series of six focus groups around the country from Jan. 19-Feb. 4, 2016, designed to gain insight into Americans’ reasoning about the possibility of human enhancements. The groups focused on longer versions of the three scenarios that were presented in the national adult survey: gene editing to reduce disease risk, brain chip implants to improve cognitive abilities and synthetic blood substitutes to improve physical abilities. This is not an exhaustive list of potential human enhancements. The focus group discussions focused on the kinds of moral and practical considerations people bring to bear in thinking about these issues. The focus group moderators asked participants to consider the potential use of these enhancements for healthy people, not those who are sick or in need. See “American Voices on Ways Human Enhancement Could Shape Our Future” for further details on the focus groups.

Pilot testing questions. Pew Research Center conducted 17 online, nonprobability surveys to test question wording options for the questionnaire. These pilot tests were also used to test the information presented about each of the three types of human enhancement. The pilot tests were completed from January through February, 2016. Each survey had an average of 100 respondents, ages 18 and older, and was conducted entirely online. Each individual pilot test covered a single type human enhancement (e.g., gene editing) and covered only a short set of about 10 questions.

Outside advisers. Pew Research Center also consulted with a number of expert advisers, listed in the acknowledgements section above, to inform the development of the questionnaire, including the scenarios or vignettes describing each type of human enhancement. We are grateful to this group for their input, but Pew Research Center bears full responsibility for the questionnaire design and analysis.