There is a long history of religious thinking and attention to the role of humans as stewards of the Earth and the environment. The Evangelical Environment Network, for example, is a ministry of Christian people and organizations aimed at reducing pollution and environmental degradation. The theological underpinnings for the network stem from the idea that God created Earth and humans, therefore, God’s children have a responsibility to care for his creations. This perspective is shared across a number of faiths. Early in President Barack Obama’s first term, the White House Office of Faith-Based Initiatives established a task force for religious organizations to address the effects of climate change on the environment and the American population. And, in June 2015, Pope Francis issued an encyclical urging Catholics and all people on Earth to focus on a broad range of issues and problems in the environment including pollution, climate change, biodiversity and global inequality of ecological systems.

Previous Pew Research Center studies have found only a modest effect of religion on attitudes about environmental protection. For example, a 2010 Pew Research Center telephone survey of U.S. adults found 81% of all adults, including strong majorities of all major religious traditions, favored “stronger laws and regulations to protect the environment,” while 14% opposed them. While 47% of those who attend worship services at least once or twice a month said their clergy speak out on the environment, few adults described religion’s influence as most important in shaping their thinking on environmental protection. Just 6% of U.S. adults in the 2010 survey said religious beliefs have had the biggest influence on what they think about “tougher laws to protect the environment.” More said the biggest influence on their views has been education (28%), the media (24%), personal experience (18%), or something else (11%). Another 6% said friends or family had the biggest influence on their views. 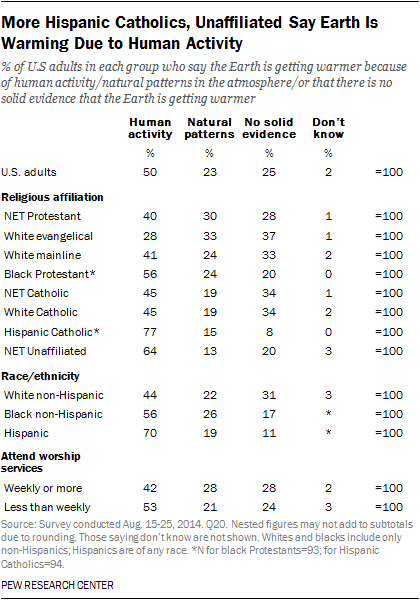 Pew Research asked this same question in 2009 and found that about the same share of U.S. adults (49%) said the Earth is getting warmer due to human activity, while fewer said there is no solid evidence the Earth is getting warmer (11% in 2009 compared with 25% today). And more said warming is occurring due to natural patterns in the environment (36% in 2009 compared with 23% today).

By comparison, fewer white mainline Protestants (41%) view climate change as primarily due to human activity. White evangelical Protestants are least likely to hold this view; 28% among this group say the Earth is warming primarily due to human activity, 33% say the Earth’s warming is mostly due to natural patterns, and 37% say there is no solid evidence that climate change is occurring.

There are modest differences by religious observance in views on this issue; 42% of frequent churchgoers attribute the Earth’s warming to human activity, compared with 53% among those who attend services less regularly.

The Pew Research survey also asked half of the respondents about their views on climate change using a more nuanced series of questions. First, respondents were asked for their views about whether there is solid evidence the average temperature of the Earth has been getting warmer over the past few decades. Those who said there has been warming were then asked whether such warming is mostly due to human activity or mostly due to natural patterns in the Earth’s environment. (For more on these results see “Public and Scientists’ Views on Science and Society.”) The pattern of findings by religious tradition and observance are similar on this set of questions.

A series of multivariate logistic regression analyses, not shown here, found no significant effect of church attendance on views either predicting that the Earth is warming or predicting that the Earth’s warming is due to human activity, once other factors are controlled. Similarly, the major religious affiliation groups did not differ from the religiously unaffiliated in views about climate change.5

Perceptions of scientific consensus and divide about climate change 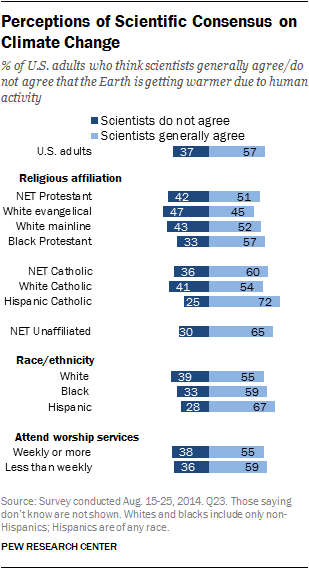 As shown in Pew Research Center’s report “Public and Scientists’ Views on Science and Society,” public perceptions on this issue tend to be associated with individual views on the subject. Those who believe the Earth is getting warmer due to human activity are most inclined to see scientists as in agreement on this point, while those who believe the Earth’s warming is due to natural patterns or that there is no solid evidence are more likely to see scientists as divided.

There are no differences in perceptions of scientific consensus on this issue by frequency of church attendance.

A multivariate logistic regression, not shown, found neither religious affiliation nor frequency of attendance significantly predict perceptions of scientific consensus about climate change. 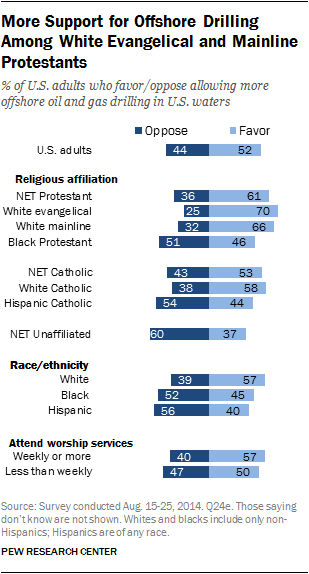 Regular churchgoers are more inclined than those who attend church less frequently to favor more offshore oil and gas drilling (57% vs. 50%).

A multivariate logistic analysis controlling for political and demographic factors, not shown, finds both evangelical and mainline Protestants (of any race) more likely than are the religiously unaffiliated to support more offshore drilling. Frequency of church attendance is not a significant predictor of views on this issue with other factors controlled. 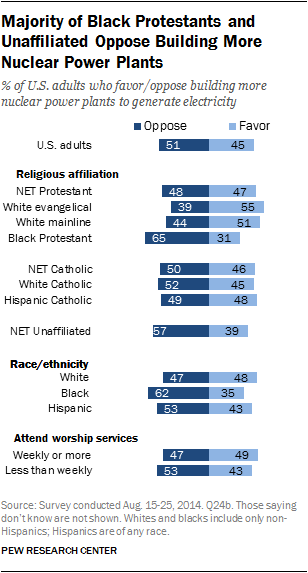 Black Protestants stand out from other religious groups for their greater opposition to nuclear power; 65% of this group (and 62% among blacks overall) oppose more nuclear power plants, while 31% are in favor. Protestants overall are closely divided on this issue with 47% of Protestants in favor and 48% opposed.

A 57% majority of the unaffiliated oppose building more nuclear power plants, while 39% are in favor.

There are modest differences by religious observance in views about nuclear energy: 49% of regular churchgoers favor building more nuclear power plants compared with 43% among those who attend services less often.

A multivariate logistic regression analysis, not shown, found no differences by religious affiliation or frequency of church attendance in views on nuclear power, when controlling for political, educational and demographic factors, however. 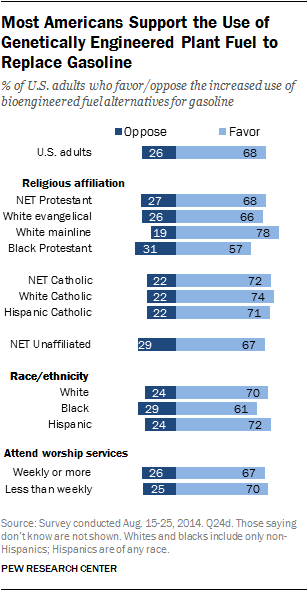 A majority of the public supports one newer form of energy development: Fully 68% of adults favor the increased use of genetically engineered plants to create a liquid fuel replacement for gasoline, while 26% oppose it.

Adults across all major religious groups are in favor of using genetically engineered plant fuel as a replacement for gasoline. White mainline Protestants are especially likely to favor this (78% do so).

Views towards the increased use of bioengineered fuel alternatives to gasoline are about the same among those who attend church services more and less frequently. 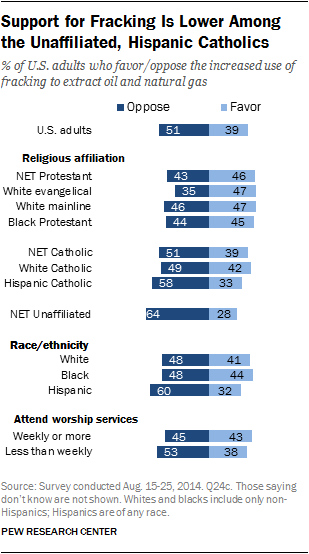 Some 39% of Americans support the increased use of hydraulic fracturing, or “fracking,” to extract oil and natural gas from underground rock formations, while 51% of the public are opposed.6

The religiously unaffiliated stand out for their lower levels of support of fracking; 28% of this group favors increased fracking, while 64% are opposed. Lower support for fracking also is seen among Hispanic Catholics (33%) and among Hispanics overall (32%). Protestants are closely divided on this issue, with 46% in favor and 43% opposed to increased fracking.

A multivariate logistic regression, not shown, found mainline Protestants (of any race) more likely to favor fracking compared with the unaffiliated, when controlling for political, educational and demographic differences. Frequency of church attendance is not a significant predictor of views about fracking in this modeling. 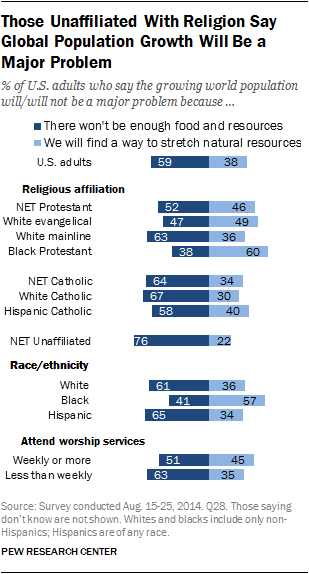 Views on this issue vary across religious traditions. Most black Protestants (60%), and black adults overall (57%), take an optimistic view that new solutions will emerge to address the strains on natural resources caused by a growing world population. The unaffiliated (76%), followed by white mainline Protestants (63%), are more likely to see the growing world population as leading to a major problem.

A multivariate logistic analysis, not shown, finds religious group to be a significant predictor of views on this issue. Compared with the unaffiliated, evangelical and mainline Protestants (of any race), as well as Catholics and other Christians, are more likely to say world population growth will not be a major problem because we will find a way to stretch our natural resources.