Space exploration has, up to now, been largely funded by the federal government and overseen by NASA. The Pew Research Center survey included two questions about space. One asks about government investment in the International Space Station. A second question asks for views about the role of astronauts as part of space exploration in the future. There are few differences among religious groups on either question. 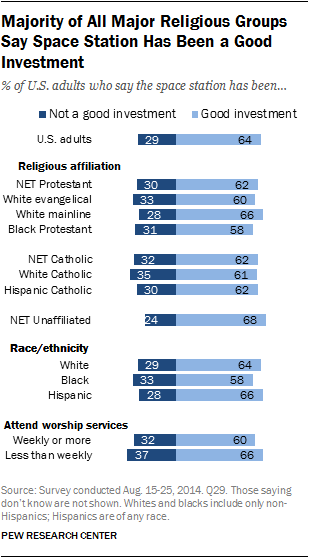 U.S. investment in the space station

Majorities across all major religious groups say the space station has been a good investment.

Views on this issue by frequency of church attendance are roughly the same.

Neither religious affiliation nor frequency of church attendance significantly predicts views about investment in the space station when controlling for other factors in a multivariate logistic regression analysis. 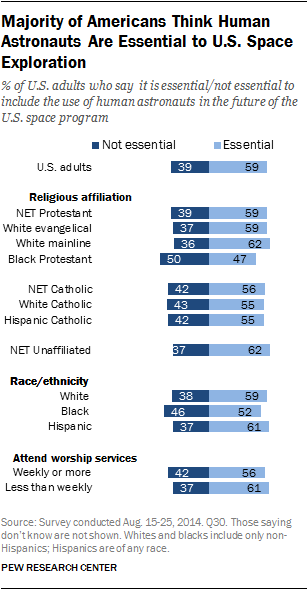 Views about the use of humans in the space program do not significantly vary based on how often the general public attends church.

A multivariate logistic regression analysis, not shown, found no differences by religious affiliation or frequency of church attendance in views about this issue when controlling for other factors.

Next: Majorities of All Religious Groups See Long-Run Benefits of Science Funding
← Prev Page
Page1Page2Page3Page4Page5You are reading page6Page7Page8Page9
Next Page →

Religion and Science Perception of Conflict Between Science and Religion Strong Role of Religion in Views About Evolution and Perceptions of Scientific Consensus Mixed Role of Religion in Views on Biomedical and Food Issues Religion and Views on Climate and Energy Issues
Few Religious Group Differences in Views on Space Issues
Majorities of All Religious Groups See Long-Run Benefits of Science Funding About This Report Appendix A: About the Survey