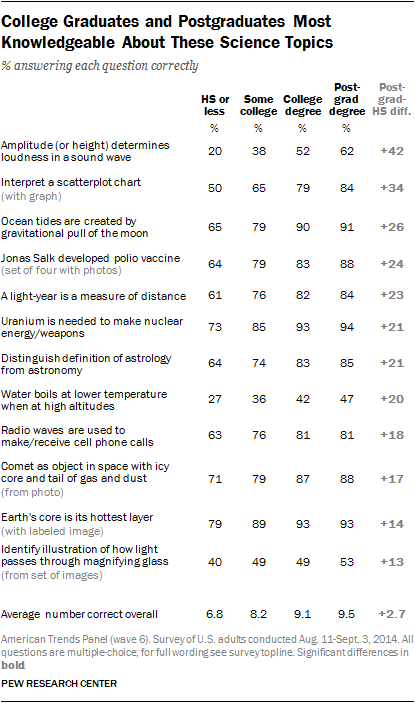 In the new Pew Research Center survey, more-educated Americans generally score better overall in answering science-related questions than those who have a high school degree or less. And those with a college degree or higher tend to perform better on the toughest questions.

Adults with a college or postgraduate degree are more than twice as likely to get at least eight out of 12 questions right, compared with adults with a high school diploma or less (82% vs. 40%). Those with a postgraduate degree score an average of 9.5 correct answers out of 12, while those with a high school education or less get an average of 6.8 correct.

Fully 57% of adults with a postgraduate degree get 10 to 12 correct answers, whereas this is true for 18% of those with a high school diploma or less.

On all 12 questions, there is at least a 13 percentage point difference in correct answers between the highest- and lowest-educated groups. The largest difference is found in a question about the loudness of a sound. A 62% majority of those with a postgraduate degree correctly identify the amplitude (height) of the sound wave as determining its loudness, as do 52% of those with a four-year college degree. By contrast, 20% of those with a high school education or less answer this question correctly. And there is a 34-point gap between these groups in correctly interpreting a scatterplot chart from among a list of four options. Half (50%) of those with a high school diploma or less answer this question correctly, compared with 84% among those who completed a postgraduate degree.

Differences by education in science knowledge were also found in previous Pew Research surveys on this topic, as detailed in a later section. These findings are also consistent with analysis of the factual science knowledge index in the National Science Board’s Science and Engineering Indicators. That research finds higher education levels associated with more factual knowledge of science. College graduates who took at least three college-level courses in science or mathematics have higher levels of knowledge about science than do those who took fewer science and math courses.12

Next: Gender Gaps Evident on Topics in the Physical Sciences
← Prev Page
Page1Page2You are reading page3Page4Page5Page6Page7Page8
Next Page →