In January 2015, the Pew Research Center released findings from two surveys; the findings illustrated substantial gaps on major science issues between the views of citizens and U.S. members of the American Association for the Advancement of Science (AAAS), the world’s largest multidisciplinary scientific professional society, despite broadly similar views about the contributions of science and the overall place of science in American society. Established in 1848, the AAAS publishes Science magazine, one of the most widely circulated peer-reviewed scientific journals in the world. It is an open-member organization that brings together a wide segment of the scientific community.

The 111-page report and 34-page follow-up report on the results of the surveys focused primarily on the views of AAAS members as a whole. A key strength of this group as a window into the views of the scientific community stems from the breadth of their disciplinary backgrounds and experiences. At the same time, findings among AAAS members as a whole also leave important questions. For instance, do scientists who work in particular disciplines have views on issues that are different from those with other disciplinary backgrounds? Our survey showed that 87% of the AAAS members surveyed believe that climate change is caused by humans; is that figure even higher among Earth scientists or others whose work centers on ecology and the environment?

Another question: Do scientists who are actively engaged in research have different views from others who may be less embedded in producing scientific research? Fully 88% of AAAS members in the sample believe that genetically modified foods are safe to eat; is there agreement on this issue among active research scientists and AAAS members who have not recently received research grants?

While we cannot address every question about views in the scientific community, our sample of AAAS membership is broad enough and deep enough to allow for more in-depth exploration of views among key subgroups. In particular, the sample allows us to distinguish between AAAS members based on their education, training, engagement with research and current employment status. Compared with our earlier releases based on the AAAS survey, this report provides a more finely grained portrait of scientists.

We recognize that definitions of who is a “scientist” and what is “science” vary.1 Moreover, we understand that there are many useful ways to examine the views of scientists; Pew Research Center will continue to explore these issues and ways that subgroups of scientific experts think about them in the coming years. The AAAS sample, therefore, is hopefully the first in a series of avenues for empirically documenting whether there are differences in views among subsets of the scientific community.2 To that end, this analysis compares views among the full sample of 3,748 AAAS members with those AAAS members who fall into three narrower definitions of the term “scientist.”

Some differences and similarities in views among AAAS members, such as discipline groups, were also noted in the prior Pew Research reports. This report looks in more detail at views among subgroups of AAAS members.

Obviously, these three groups of AAAS members are overlapping. They cover key sub-populations of AAAS scientists whose views might be relevant to those who want more in-depth insight our findings.

As suggested above, there are a large number of possible ways to think about relevant subgroups of scientists. We also provide a set of detailed appendix tables showing the policy views and characteristics of each primary discipline group among AAAS members, plus the views of those who are not in the subpopulations. These additional tables also show responses of those in the AAAS survey by respondents’ employment status, employment sector and education level.

Here are some of the patterns we find in this detailed analysis, which covers the 13 science issues Pew Research highlighted in our original report:

Views among AAAS members who meet narrower definitions of the term “scientist” closely resemble those for the AAAS sample as a whole. 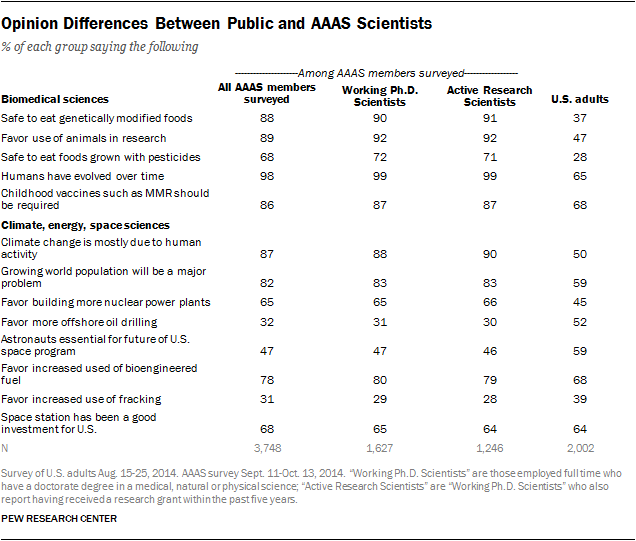 Similarly, views among Active Research Scientists and the full AAAS sample are quite similar; differences between the groups range from 1 percentage point to 4 percentage points on these issues. For example, 92% of Active Research Scientists in this sample favor the use of animals in scientific research, compared with 89% among all AAAS members surveyed. Views among domain experts are more varied with few or modest differences on some topics and substantial opinion differences across disciplinary groups on other topics. We have more to say on these data below. 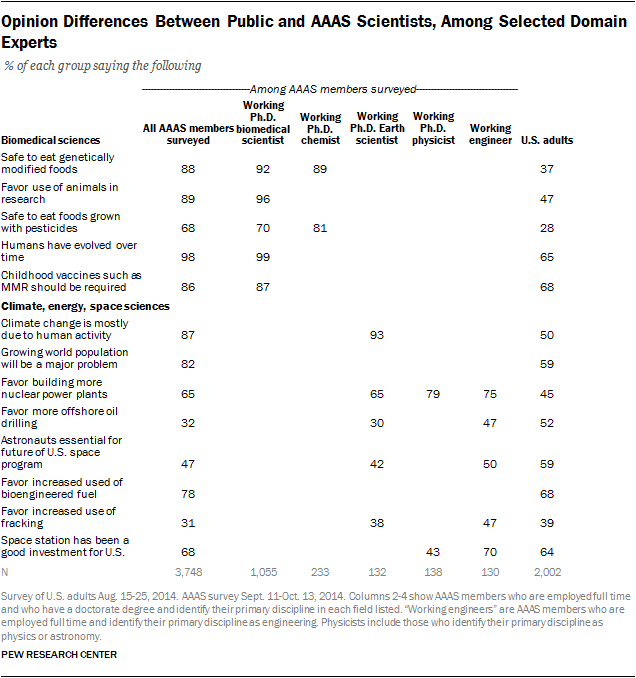 Narrowing the definition of scientist does not change the basic finding that the scientific community has notably different views from those of the general population on key science-related issues.

No matter how AAAS members are categorized, their views starkly differ from the public’s on key scientific issues such as global warming and its causes, human evolution, vaccination strategies and the safety of eating genetically modified foods or foods grown with pesticides.

On topics related to their areas of expertise, the views of domain experts sometimes differ from the views of those in other scientific fields.

Opinions on these topics across disciplinary groups are more varied. On a topic such as evolution, there is near consensus among all disciplinary groups that humans and other living things have evolved over time. On other topics, there is more variety of opinion among those with disciplinary backgrounds related to the topic in question. On space issues, for example, AAAS physicists are less inclined than either engineers or all AAAS members to consider astronauts essential to the future of the U.S. space program. In addition, fewer AAAS physicists than either AAAS engineers or AAAS members as a whole consider government investment in the International Space Station to be good for the country. AAAS physicists also are somewhat more inclined than are Earth scientists to support building more nuclear power plants, although a majority of both groups favor building more such plants.

Comparisons are made here to a survey of the general public conducted August 15-25, 2014, by landline and cellular telephone among a nationally representative sample of 2,002 adults. The survey tracks public attitudes about science in society and maps the contours of opinion on a wide range of issues within the domain of science and technology. The margin of error for results based on the full sample is +/- 3.1 percentage points. See the January 2015 report for more details.

Next: Why Elaborate on Scientists' Views?
← Prev Page
You are reading page1Page2Page3Page4Page5Page6
Next Page →