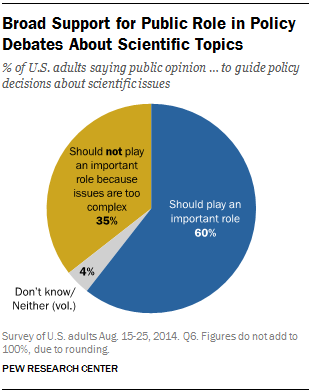 There are considerable and often-intense debates about the meaning of scientific findings, research methods and public policy issues tied to science. Basic questions about the modern moment are bound up in these debates: Do citizens trust scientists and the way scientists do their work? Are many scientific issues becoming knee-jerk partisan disputes? Are those who are strong believers in religious and spiritual precepts inherently hostile to scientific inquiry? Is scientific illiteracy a major problem for society? Are scientists pushing innovation too quickly into morally challenging arenas without enough consideration of right and wrong – or even whether their work might fundamentally harm humans or habitat? The questions continue into the longer tail of specific issues that attach to each domain of science.

Recent Pew Research Center survey findings have been invoked in a number of these debates because they highlighted the differences in views between citizens and scientists on a dozen science-related issues. A number of the gaps between the public and the scientific community connected to the American Association for the Advancement of Science were particularly large. That prompted Alan Leshner, outgoing CEO of AAAS, to write in an editorial in the Science magazine:

“The public’s perceptions of scientists’ expertise and trustworthiness are very important, but they are not enough. Acceptance of scientific facts is not based solely on comprehension levels. It can be compromised whenever information confronts people’s personal, religious, or political views, and whenever scientific facts provoke fear or make people feel that they have no control over a situation. The only recourse is to have genuine, respectful dialogues with people.”

The remainder of this report looks at the underpinnings of public attitudes on science-related topics. The analysis identifies whether political, educational and science-knowledge factors are associated most strongly with people’s opinions, or whether other factors such as gender, race and ethnicity age or religion play a central role. This modeling helps make clear that no single explanation accounts for people’s viewpoints on science-related topics: Sometimes the strongest association is tied to partisanship and ideology, other times it is tied to people’s general education level and their science knowledge. Other times, demographic differences are most salient – and there are still other factors at play, including religion. All of these factors are covered in this report. We also will issue a separate report that focuses on the interplay of religion and science, and will cover those issues in greater depth.

Chapter 1 looks at the extent to which people’s political views, educational attainment, knowledge of science, religious views and other factors explain public opinions across this set of issues. The remainder of the report looks at each issue separately, showing people’s views on each issue across all of these subgroups and then summarizing the key findings from the multivariate regression analyses to address the relative influence of each factor when controlling for multiple factors simultaneously. Appendices A and B provide more details on the survey design and methodology, the exact questions asked of survey respondents, the measures used to assess science knowledge, and the factors included in the multiple regression analyses discussed throughout the report.

About the Survey and the Regression Modeling in This Report

The general public survey was conducted Aug. 15-25, 2014, by landline and cellular telephone, among a nationally representative sample of 2,002 adults. The survey tracks public attitudes about science in society and maps the contours of opinion on a wide range of issues within the domain of science and technology. The margin of error for results based on the full sample is +/- 3.1 percentage points. See Appendix A for more details on the survey methodology.

Throughout this report, we review the correlates of public views about science-related topics using a statistical technique known as logistic regression, one of several regression techniques commonly used in social science analysis. We show the cross tabulation between views on each topic and a variety of respondent characteristics including gender, race, ethnicity, age, education (including holding a degree in a scientific field at the college level or above), level of science knowledge, political party and ideology. As is typical of Pew Research Center reports, we characterize the relationships shown in these cross tabulations (sometimes referred to as bivariate relationships because they involve just two variables) based on tests of statistical significance that take into account the complex sample design of the survey.

We then present the results of a multivariate analysis, which looks at the relative influence of each characteristic, or factor, in predicting respondents’ views on each topic when all other factors are statistically controlled. The factors included in this analysis are gender, race and ethnicity, age, education, general knowledge about science, party affiliation and political ideology. To assess the relative influence of these factors, we show the difference in predicted probability between the maximum and minimum value for a given variable, holding all other variables at their means. In several cases we also report separate models with other factors, such as religious affiliation and frequency of church attendance. We rely on the results of the regression analyses to characterize the strong, medium and weak predictors of attitudes on each topic. See Appendix A for more.