The bulk of the analysis in this report stems from a general public survey conducted by telephone with a national sample of adults (18 years of age or older) living in all 50 U.S. states and the District of Columbia. The results are based on 2,002 interviews (801 respondents were interviewed on a landline telephone and 1,201 were interviewed on a cellphone). Interviews were completed in English and Spanish by live, professionally trained interviewing staff at Princeton Data Source under the direction of Princeton Survey Research Associates International from Aug. 15 to Aug. 25, 2014.

A combination of landline and cell random digit dial (RDD) samples was used to reach a representative sample of all adults in the United States who have access to either a landline or cellular telephone. Both samples were disproportionately stratified to increase the incidence of African American and Hispanic respondents. Within each stratum, phone numbers were drawn with equal probabilities. The landline samples were list-assisted and drawn from active blocks containing one or more residential listings, while the cell samples were not list-assisted but were drawn through a systematic sampling from dedicated wireless 100-blocks and shared service 100-blocks with no directory-listed landline numbers. Both the landline and cell RDD samples were disproportionately stratified by county based on estimated incidences of African American and Hispanic respondents. 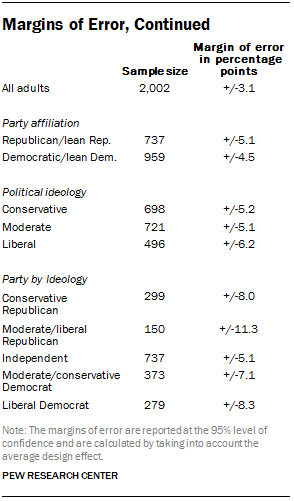 The first stage of weighting accounts for different probabilities of selection associated with the number of adults in each household and each respondent’s telephone status. 46 This weighting also adjusts for the overlapping landline and cell RDD sample frames and the relative sizes of each frame and each sample. Due to the disproportionately stratified sample design, the first-stage weight was computed separately for each stratum in each sample frame.

After the first-stage weight adjustment, two rounds of poststratification were performed using an iterative technique known as raking. The raking matches the selected demographics to parameters from the U.S. Census Bureau’s 2012 American Community Survey data.47 The population density parameter was derived from 2010 census data. The telephone usage parameter came from an analysis of the July-December, 2013 National Health Interview Survey. 48 Raking was performed separately for those asked each form of the questionnaire using sample balancing, a special iterative sample weighting program that simultaneously balances the distributions of all variables using a statistical technique called the Deming Algorithm. The raking corrects for differential nonresponse that is related to particular demographic characteristics of the sample. This weight ensures that the demographic characteristics of the sample closely approximate the demographic characteristics of the population.

The first round of raking was done individually for three racial/ethnic groups (Hispanics, non-Hispanic blacks, and all other non-Hispanics). The variables matched to population parameters for each race/ethnicity group were gender, age, education and region. The variables matched to population parameters for Hispanic respondents also included nativity (U.S. born versus foreign born). The variables for other non-Hispanic respondents also included race (white race versus some other or mixed race).

A second round of poststratification raking was performed on the total sample for each form. Each form was raked to the following demographic variables: gender by age, gender by education, age by education, census region, race/ethnicity, population density and household telephone status (landline only, cellphone only, or both landline and cellphone).

The survey also included a measure of science training at the college level or above. Survey respondents who had completed at least a four-year college degree were asked whether or not they held a degree in a scientific field. Responses among those holding a degree in a science field as compared to those with degrees in some other field are shown throughout the report. This factor was not included in multivariate regression analyses.

The survey questionnaire included six questions designed to measure factual knowledge about a range of science topics. The set included five multiple-choice questions and one true-false question. Respondents were asked to identify the main concern about the overuse of antibiotics, the mechanism behind lasers, that nanotechnology deals with extremely small things, an example of a chemical reaction, the main function of red blood cells, and the gas most scientists believe cause the average temperature to rise. The set of questions included a mix of biological and physical science topics; some involved aspects of science that are likely to come up in adult life (e.g., the main concern about the overuse of antibiotics) or in following the news (e.g., the gas most scientists believe cause temperatures in the atmosphere to rise). A majority of adults provided a correct answer to each of the six questions. The alpha reliability coefficient for the scale of six items is 0.62.49 Those who answered five (20%) or all six (27%) questions correctly were classified as having more science knowledge (47%) and compared with those who answered fewer questions correctly (53%).50

About the Multivariate Regression Analyses

The regression analyses are based on the full sample of U.S. adults in the survey who provided a response on each topic. The analysis is based on the weighted sample, thus adjusting for differences in the probability of selection and nonresponse differences across groups.51 Results are based on 0.05 level of statistical significance. The dependent variable omits respondents who said don’t know to that question. The independent variables used in each analysis are as follows: gender (women compared with men); race and ethnicity (non-Hispanic blacks, Hispanics and other or mixed race as compared with non-Hispanic whites); age; education (having a postgraduate degree, college degree or some college as compared with those having a high school degree or less education); science knowledge (those with more as compared with less knowledge about science based on the index described above); party affiliation (Republicans and leaning Republicans, those with no affiliation or leaning lean toward either party as compared with Democrats and leaning Democrats); political ideology (conservatives, moderates as compared with liberals). Additional analyses included religious affiliation and frequency of worship attendance along with the variables listed above.52 A detailed report on religious group differences related to science attitudes is forthcoming. And, for several issues, separate analyses included the variables described above in addition to one or two other relevant judgments. The total number of respondents in each analysis ranges between roughly 1,614 (when religious factors are included in the model) to a possible maximum of 2,002 respondents, depending on the number of respondents missing responses to either an independent variable in the model or to the dependent variable. Further details about the regression results reported here are available upon request. 53 The dataset will be publicly available for secondary analysis through the Pew Research Center website in the coming months.

The figures shown in the multivariate analysis tables are the difference in the predicted probability of the dependent measure when the independent variable is at its maximum value minus when it is at its minimum value, with other independent variables held at their means. For these independent variables the minimum value is zero indicating that a characteristic such as being African American is not present and the maximum value is one indicating that a characteristic such as being African American is present. The independent variable for age was re-scaled to range from 0 to 1; these values correspond to a minimum age of 18 and a maximum of 97. For the ordered logistic regression model, the figures shown are the average changes in predicted probability (or absolute value, thereof) across the set of categories in the dependent measure (the frequency of looking for GM food labels).

These classifications are designed to help readers assess the broader patterns underlying public attitudes across a large set of topics, but they are, of course, dependent on the criteria used. Note that judging the relative effect size against the standard deviation of the independent variable means that variables with more variability such as gender and science knowledge require a change in predicted probability of about 0.24 to be classified as strong while that for those holding a postgraduate degree would need to be about 0.16 or higher.