The vast majority of Israeli respondents in this survey identify as Jews (81%), including 40% who identify as Hiloni, 23% as Masorti, 10% as Dati and 8% as Haredi.

Readers should bear in mind that because of relatively high birthrates among Muslims who live in Israel, the proportion of Jews is slightly higher among adults than it is among children. The reverse is true for Muslims, who make up a higher share of children than they do of adults in Israel.

Slight discrepancies between survey proportions and census proportions also may result from the definition of religious groups used in the survey. For example, this report treats a small number of Israelis as Jewish even though they describe themselves, religiously, as atheist, agnostic or nothing in particular because they have at least one Jewish parent or were raised Jewish and consider themselves Jewish aside from religion. This parallels the definition of “who is a Jew” that was used in Pew Research Center’s 2013 survey of Jews in the United States. (See the sidebar on “How religious groups are defined” in the Overview of this report.)

Roughly half of Jews identify as Hiloni (secular) 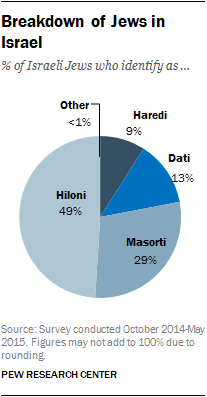 Virtually no conversion across religions in Israel 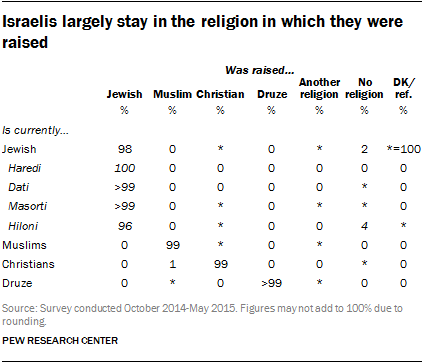 Religious conversion also is uncommon among Israeli Muslims, Christians and Druze. Nearly all respondents who currently identify as Muslim, Christian or Druze say they were raised within those religious traditions.

Net loss for Datiim through switching to other Jewish subgroups 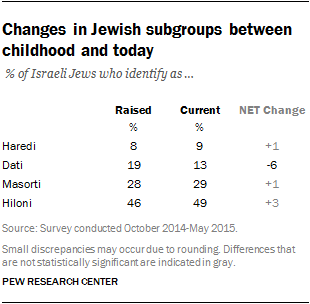 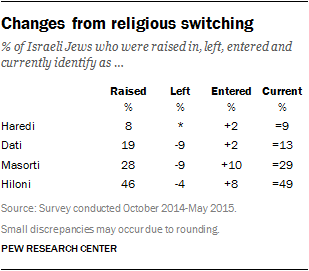 This overall picture of stability masks substantial movement among Jewish subgroups. For example, while the proportion of Jewish adults raised Masorti is roughly the same as the proportion that is currently Masorti, 9% of Jewish adults say they were raised Masorti and are no longer in the group, while 10% of adults were raised in another group and now identify as Masortim.

Similarly, while the proportion of Hilonim has remained relatively stable during survey respondents’ lifetimes, 4% of Israeli Jewish adults were raised as Hilonim and no longer identify as such, while twice as many (8%) now identify as Hilonim after having been raised in a different subgroup.

About one-in-ten Jewish adults (9%) were raised Datiim and are no longer Datiim, while approximately 2% now consider themselves Datiim after being raised in another group.

Compared with the other three groups, there has been relatively little switching out of the Haredi community. 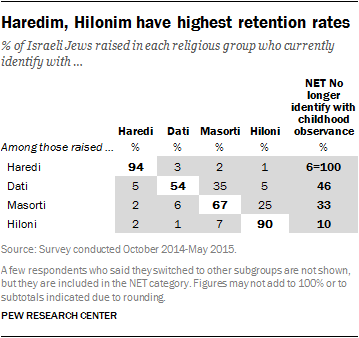 Overall, the two poles of Israeli Judaism – Hilonim and Haredim – experience the highest retention rates. The vast majority of those raised Haredim are still Haredim (94%), and nine-in-ten Jews raised Hilonim are still Hilonim.

Fewer Jews switch to groups with a higher level of observance than the one in which they were raised. 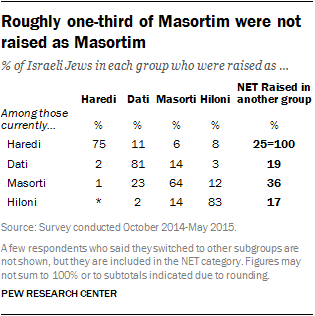 The flip side of examining retention rates is to consider which groups are most heavily made up of people who have switched into the group.

Datiim and Hilonim are composed of 19% and 17% of switchers, respectively. Among each group, 14% of adults were raised Masorti.

Next: 3. Identity
← Prev Page
Page1Page2You are reading page3Page4Page5Page6Page7Page8Page9Page10
Next Page →

Israel’s Religiously Divided Society 1. Comparisons between Jews in Israel and the U.S.
2. Religious affiliation and conversion
Roughly half of Jews identify as Hiloni (secular)Virtually no conversion across religions in IsraelNet loss for Datiim through switching to other Jewish subgroupsJews raised as Haredi or Hiloni usually stayAbout one-in-five current Masortim were raised as Datiim
3. Identity 4. Religious commitment 5. Jewish beliefs and practices 6. Muslim and Christian beliefs and practices 7. Education, values and science 8. Views of the Jewish state and the diaspora 9. The peace process, settlements and U.S. support 10. Religion, politics and public life 11. Intergroup marriage and friendship 12. Anti-Semitism and discrimination Acknowledgments Methodology