The 2014 Religious Landscape Study has several unique strengths. Its large sample size (n=35,071) and detailed, branching set of questions about religious identity make it possible to estimate the size of a wide variety of religious groups with a high degree of precision. The large sample also makes it possible to describe the characteristics of smaller religious groups that account for less than 1% of the U.S. population, something not possible with smaller surveys. In addition, the methodological approach employed by the survey (with a minimum of 300 interviews in every state) allows for estimates of the religious makeup of all 50 states, the District of Columbia and the nation’s largest metropolitan areas.

But the Religious Landscape Study is not the only source of long-term data on the changing religious composition of the U.S. The General Social Survey (GSS), a project of the independent research organization NORC at the University of Chicago, has been conducted every year or two since 1972. Sample sizes for GSS surveys range from 1,372 to 4,510 and average about 2,000 per year. The Gallup Organization has been asking about religious identity even longer, and releases aggregated results based on the surveys it conducts each year. The American Religious Identification Surveys (ARIS) are large-scale studies undertaken in 1990 (n=113,713), 2001 (n=50,281) and 2008 (54,461). Media organizations like The Washington Post and ABC News regularly conduct polls about politics and current events that include questions about religious identity. Understanding how the findings of the Religious Landscape Study compare with these sources, and with results from ongoing polls conducted monthly by the Pew Research Center, may help to put the study’s findings into a broader context.

All major religion surveys find that the unaffiliated share of the U.S. population (the percentage of religious “nones”) is growing rapidly. In the 2014 GSS, for instance, 21% of adults said they have no religious affiliation, up from just 8% in 1990 and 5% in 1972, when the GSS was first conducted.28 Gallup polls find fewer religious “nones” in recent surveys (16% in 2014), but they, too, find that this population has been growing.

The ARIS studies found that the religious “nones” grew from 8% of the adult population in 1990 to 15% in 2008. Polling done in 2012 and early 2013 by Social Science Research Solutions (SSRS) – which is the same research firm that conducted the interviewing for the ARIS studies – suggests that the unaffiliated share of the population continued to grow after the 2008 ARIS survey, and stood at 20% in 2012. Washington Post-ABC News surveys also show an upward trajectory for the “nones,” though their growth is less pronounced in Post-ABC surveys than in some other sources.

The Religious Landscape Study’s finding that 23% of adults are unaffiliated with a religion is very similar to results from Pew Research Center monthly polls, which put the figure at 21% for 2014 (and at 22% in the summer of 2014, when data collection for the Landscape Study was being conducted). 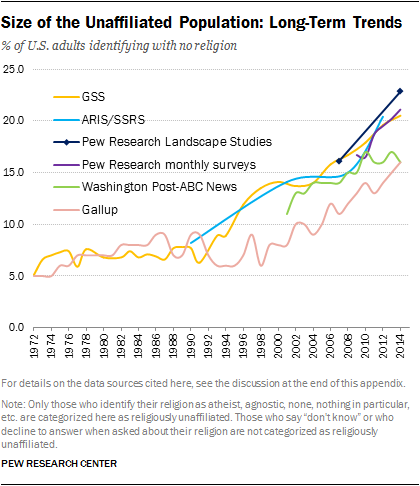 Different survey organizations employ different methods and ask differently worded questions about religious identity, which may account for some of the variability in estimates. But all find that the unaffiliated share of the population has been increasing over time.29 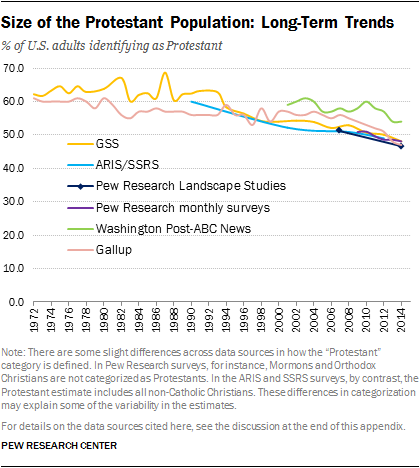 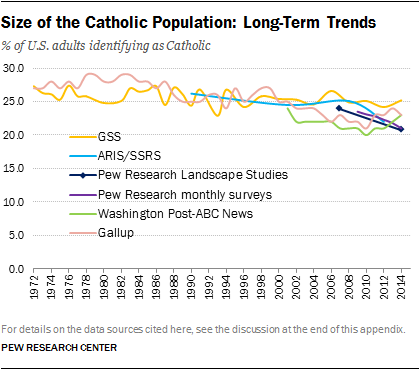 The ARIS studies found that the Catholic share of the population held fairly steady between 1990 (26.2%) and 2008 (25.1%). By 2012, however, surveys conducted by SSRS using the same question and same basic methodology employed in the ARIS studies found 22.0% of adults identifying as Catholic, a decline of 3.1 percentage points since the 2008 ARIS.30 This closely mirrors the trajectory for Catholics observed between the 2007 and 2014 Religious Landscape Studies. The findings of the 2014 Landscape Study also track closely with results from aggregated monthly polls conducted by the Pew Research Center that show a recent decline in the Catholic share of the population.

There are a number of factors that might help explain the differing estimates of the size of the Catholic population. Comparison of the GSS and the Landscape Study, for instance, shows that the 2014 GSS sample included a slightly higher share of Hispanics than the 2014 Religious Landscape Study (17% vs. 15%). It also had fewer interviews with young adults between the ages of 18 and 24 (9% in the GSS vs. 14% in the Landscape Study).31 This helps explain part of the difference between the 2014 Landscape findings and the 2014 GSS, since Hispanics identify as Catholic at a higher rate than the rest of the U.S. population, and younger Millennials identify as Catholic at a lower rate than do older adults.

Readers should also bear in mind that different methods and different questions can produce different results in surveys. The GSS consists primarily of in-person, face-to-face interviews, while the Landscape Study, other Pew Research surveys, Washington Post-ABC News polls, ARIS/SSRS surveys and recent Gallup polls are all conducted by telephone. And all of the surveys analyzed here ask different questions to measure religious affiliation. The GSS, for example, asks “What is your religious preference? Is it Protestant, Catholic, Jewish, some other religion, or no religion?” Gallup surveys have asked about religious identity in a variety of ways over the years, with its recent surveys asking “What is your religious preference – Protestant, Roman Catholic, Jewish, another religion, or no religion?” The Post-ABC trends are based on an open-ended religion question (“What, if anything, is your religion?”), as are the ARIS/SSRS data (“What is your religion, if any?”).

The 2014 Religious Landscape Study (and Pew Research monthly polls) asks a longer question with a more extensive list of options, including three separate chances for respondents to identify with no religion: “What is your present religion, if any? Are you Protestant, Roman Catholic, Mormon, Orthodox such as Greek or Russian Orthodox, Jewish, Muslim, Buddhist, Hindu, atheist, agnostic, something else, or nothing in particular?”32 By explicitly offering respondents the chance to identify as atheist, agnostic or “nothing in particular,” the Religious Landscape Study question may make it easier for marginally religious people who once thought of themselves as Catholics, Protestants or members of another religious group to identify as religious “nones.” This underscores the importance of taking methodology, question wording and other factors into account when comparing results from one survey to another.

The American Religious Identification Surveys (ARIS) were conducted in 1990 (n=113,713), 2001 (n=50,281) and 2008 (n=54,461). The principal investigators on the ARIS studies are Barry A. Kosmin and Ariela Keysar of Trinity College, Hartford, Conn. The ARIS results are compared with findings (provided in correspondence) from surveys conducted by Social Science Research Solutions (SSRS) in 2012 and early 2013 (n=61,412). SSRS is the research firm that conducted interviewing for the ARIS studies.

Trends from Washington Post-ABC News surveys were graciously provided to the Pew Research Center via correspondence. Data from Post-ABC polls are available for download from the Roper Center for Public Opinion Research.

Gallup data were accessed at http://www.gallup.com/poll/1690/religion.aspx.

Results from Pew Research Center monthly surveys reflect yearly aggregated data from polls conducted in 2009 (the first year in which most Pew Research Center surveys were conducted in both English and Spanish) through 2014. In total, this analysis draws on more than 50 separate polls and interviews with more than 110,000 respondents. See https://www.pewresearch.org/.