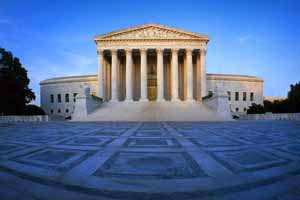 News outlets reported last night that the Obama administration has submitted a “friend-of-the-court” brief on the legal challenge to California’s gay marriage ban (Proposition 8), which will be argued before the U.S. Supreme Court on March 26. According to high court rules, the administration had until yesterday (Feb. 28) to submit such a brief in this case, Hollingsworth v. Perry.

What are friend-of-the-court (amicus curiae) briefs? While the Supreme Court requires the parties in a case to submit their arguments in written briefs, it also allows outside groups and individuals, in this case the Obama administration, to submit additional briefs laying out their views. News outlets are reporting that the administration’s brief sides with those who argue that Proposition 8 violates the equal protection guarantees contained in the U.S. Constitution and thus should be struck down. While such a brief would not necessarily sway the justices, the arguments of a sitting president’s administration traditionally are given weight.

The day after the Supreme Court hears oral arguments in the Perry case, it will hear another same-sex marriage case, Windsor v. United States, which involves a constitutional challenge to the federal Defense of Marriage Act (DOMA), the 1996 law that bars the federal government from recognizing same-sex marriages. Last Friday, the administration submitted a brief in the Windsor case as well, arguing that DOMA, like Proposition 8, should be struck down.

While the high court’s ruling in one or both of these cases could alter the legal and political landscape in the debate over same-sex marriage, many legal analysts contend that the challenge to Proposition 8 has the potential to yield a more significant decision. As a recent Pew Research Center legal analysis of the two cases notes, the DOMA case involves the relatively narrow issue of whether the federal government must respect each state’s definition of marriage rather than the broader question of whether all states must allow same-sex marriage. The Proposition 8 case, in contrast, involves a decision by a state (in this case, California) to prohibit gays and lesbians from marrying and could, in theory, be the better vehicle for a decision on whether the U.S. Constitution requires all states, not just California, to recognize gay marriage. However, the high court could end up ruling more narrowly to uphold or strike down only California’s ban on gay marriage.

Pew Research surveys have shown rising public support for gay marriage in the United States, with 48% of Americans in favor of it, according to aggregated data from surveys conducted in 2012.