Latinos are divided by religion in their preferences in the upcoming presidential election, according to the latest survey by the Pew Hispanic Center and the Pew Forum on Religion & Public Life, both projects of the Pew Research Center. Three-quarters of Latino Catholics and eight-in-ten religiously unaffiliated Latinos support President Barack Obama’s re-election. However, among Latino evangelical Protestants, who account for 16% of all Latino registered voters, just 50% prefer Obama, while 39% support his Republican challenger, Mitt Romney. 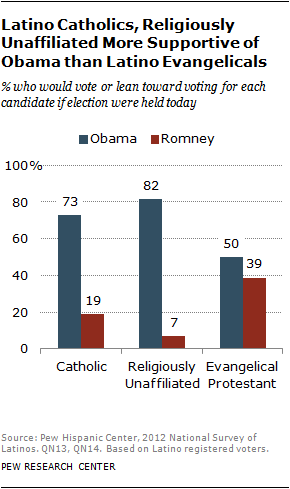 These same patterns are reflected in Latinos’ partisan affiliations. Eight-in-ten religiously unaffiliated Latino voters (who make up 15% of the Latino electorate) and seven-in-ten Latino Catholics (57% of the Latino electorate) are Democrats or lean toward the Democratic Party. Among Latino evangelical voters, identification with the Democratic Party is lower; about half are Democrats or lean Democratic, while about a third are Republicans or lean toward the Republican Party.

As the presidential election approaches, many Hispanic churchgoers say they are hearing from their clergy about various political issues and, to a lesser extent, about candidates and elections. Roughly half of Latinos (54%) who attend religious services at least once a month say they have heard their clergy speak out about abortion, while 43% have heard from the pulpit about immigration, and 38% say their clergy have spoken out about homosexuality. A smaller proportion, roughly three-in-ten, report hearing from their clergy about candidates and elections.

This report takes an in-depth look at the link between religion and political topics in the Latino community. It is based on a nationally representative bilingual telephone survey conducted jointly by the Pew Hispanic Center and the Pew Forum on Religion & Public Life, Sept. 7-Oct. 4, 2012 (largely before the first presidential debate), among 1,765 Latino adults, including 903 registered voters. The Latino electorate today includes 23.7 million eligible voters – an increase of more than 4 million since 2008. Overall, Latinos now account for 11% of the nation’s eligible electorate, up from 9.5% in 2008. In addition, Latinos make up at least 14% of all eligible voters in three battleground states this year – Colorado, Florida and Nevada. Additional information on the Latino electorate, including a discussion of how many Latinos are likely to vote in the upcoming election and an analysis of their issue priorities, is available in a recent Pew Hispanic Center report “Latino Voters Support Obama by 3-1 Ratio, But Are Less Certain than Others about Voting.” 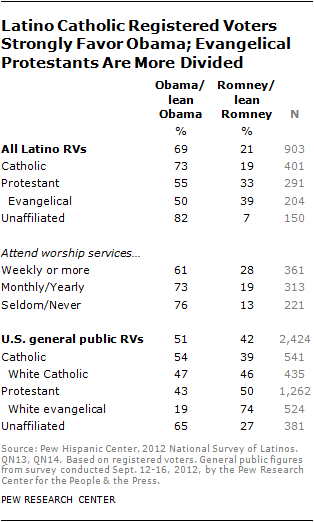 Hispanics who are not affiliated with a religion also are strongly in favor of Obama (82% Obama vs. 7% Romney). Among the religiously unaffiliated in the U.S. general public, roughly two-thirds favor Obama.

For the first time since the Pew Hispanic Center began asking the question in its National Survey of Latinos, more Hispanics favor allowing gays and lesbians to marry legally (52%) than oppose same-sex marriage (34%). This finding reflects the overall trend in the general public toward more support for same-sex marriage, and is in line with the 2011 National Survey of Latinos, in which 59% of Hispanics said that homosexuality should be accepted by society, while 30% said it should be discouraged by society. 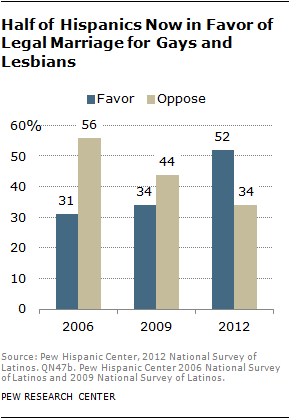 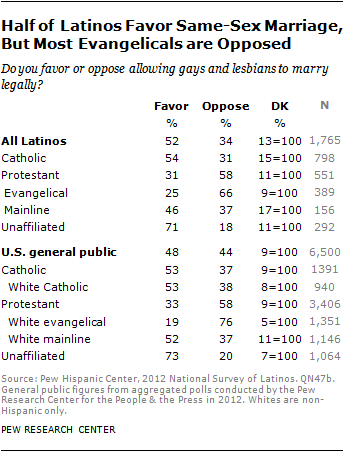 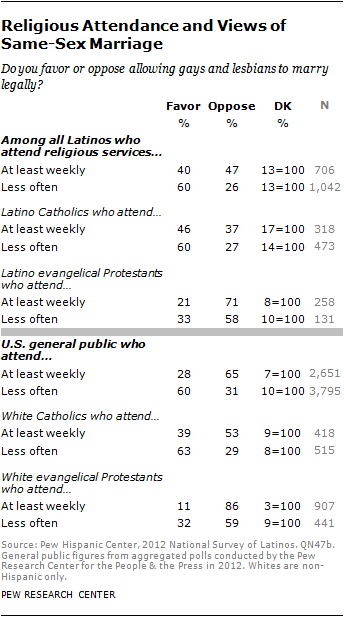 What Hispanics Hear From Clergy About Politics 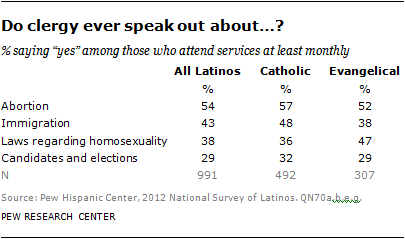 1 Subsequent polling conducted Oct. 4-7, 2012, by the Pew Research Center for the People & the Press found an evenly divided electorate, with 46% of all registered voters expressing support for Obama and 46% saying they would vote for Romney. The mid-September poll was chosen for comparison in this report because it was fielded during the same period as the 2012 National Survey of Latinos. (return to text)

Next: Appendix A: 2010 National Survey of Latinos Methodology
← Prev Page
You are reading page1Page2
Next Page →