Mitt Romney won the Illinois Republican primary on Tuesday, securing a double-digit victory over his closest competitor, Rick Santorum. Ron Paul and Newt Gingrich trailed far behind, with neither securing more than 10% of the vote. Exit polling shows that Romney continues to draw less support from white born-again/evangelical voters than from non-evangelicals, while Santorum has yet to secure an outright victory among Catholic voters in any state for which data are available. 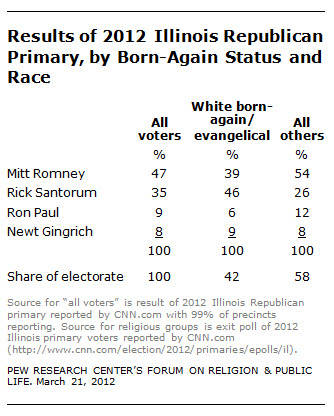 Among Illinois Protestants (who accounted for 56% of the GOP primary electorate), 45% voted for Romney while 38% backed Santorum. Romney was the clear winner among Catholics, who made up roughly one-third of Illinois primary voters. Romney garnered 53% support from Catholics, compared with 30% for Santorum. 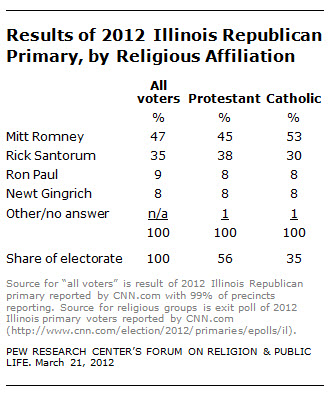 Half of Illinois primary voters said they attend religious services on a weekly basis. This group split its votes between Romney (44%) and Santorum (39%). By contrast, Romney was the clear winner among the roughly one-third of Illinois voters who said they attend religious services occasionally; 54% voted for Romney compared with 26% who supported Santorum. 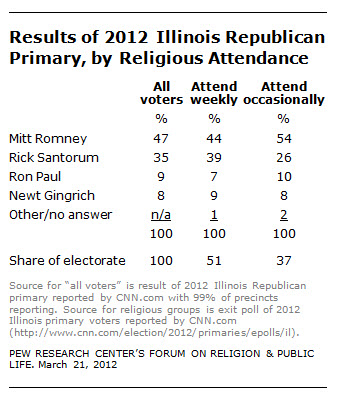 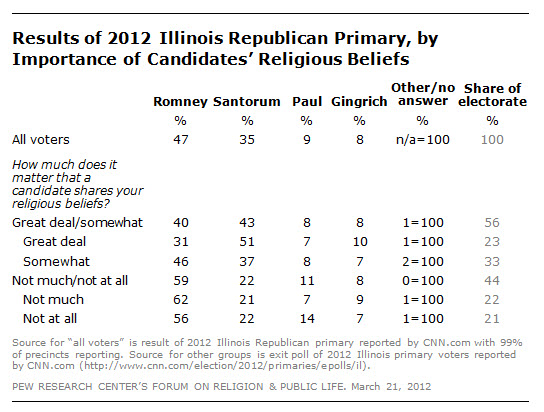 This analysis is based on results from exit polls conducted as voters left the polls during the Illinois Republican primary election. The polls were conducted by Edison Media Research for the National Election Pool. Full results and additional details from the Illinois exit poll can be accessed at http://www.cnn.com/election/2012/primaries/epolls/il.

This analysis is based on exit poll data that were available as of 1:00 p.m. on March 21. Exit poll data are sometimes reweighted, so some figures may be different from those available on CNN.com.