The leading regional destination for Hindus is the same as their top region of origin: About six-in-ten Hindu migrants have moved to countries in the Asia-Pacific region, where more than nine-in-ten originate. There has been substantial movement between the South Asian countries of India, Pakistan, Sri Lanka, Bangladesh and Bhutan. But substantial numbers of Hindus also have moved to North America and the Middle East-North Africa (mostly Gulf Cooperation Council countries). 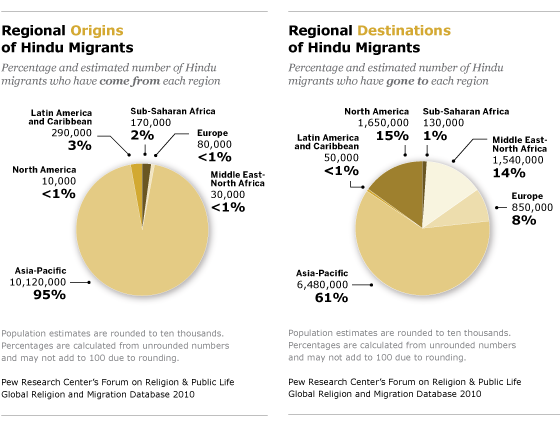 For Hindus, India is far and away the No. 1 destination country. About 3.7 million Hindu immigrants have moved to India, principally from neighboring countries, for reasons ranging from family reunification to job opportunities. But those factors also sometimes operate in reverse, drawing Hindus from India and nearby countries to Bangladesh, Nepal, Pakistan and Sri Lanka, which are among the Top 10 destinations – as well as among the Top 10 origins – for Hindu migrants.

Outside of South Asia, the United States has by far the most Hindu immigrants: an estimated 1.3 million first-generation (foreign-born) Hindus, most of whom have arrived in recent decades. Significant Hindu migration also has occurred to the Arab states of the Persian Gulf (especially Saudi Arabia and the United Arab Emirates) and to the United Kingdom and Canada. 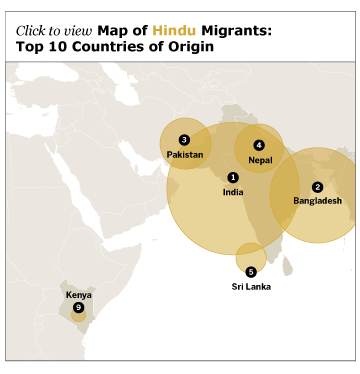 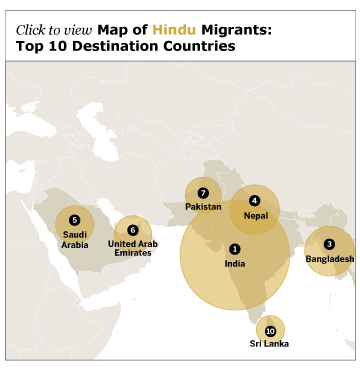