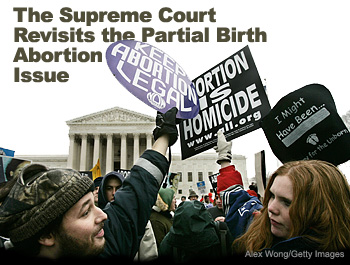 On Nov. 8, 2006, the U.S. Supreme Court heard oral argument in two cases that challenge the constitutionality of the Federal Partial Birth Abortion Ban Act of 2003. The related cases, Gonzales v. Carhart and Gonzales v. Planned Parenthood, offer the high court an opportunity to revisit an issue it last addressed in 2000, in Stenberg v. Carhart. That 5-4 decision struck down a similar state statute in part because it contained an exception only in cases where a woman’s life is in danger and did not allow a similar exception to protect a woman’s health. In addition, the majority in Stenberg found that the statute could reasonably be interpreted by doctors to include not only the partial birth procedure but other abortion methods as well, and therefore imposed an unconstitutional burden on women seeking an abortion.

Although it has only been six years since Stenberg was decided, changes in the composition of the high court raise the possibility of a different outcome this time. The recent retirement of Justice Sandra Day O’Connor – the fifth and deciding vote in Stenberg – and her replacement by the more conservative Justice Samuel Alito create the prospect of a five-vote majority in favor of upholding the federal partial birth abortion ban and possibly even reversing the precedent set in Stenberg.

Under the law in question, a doctor cannot perform what opponents call partial birth abortion (the medical community and abortion rights advocates prefer the terms dilation and extraction, D&X or “intact dilation and evacuation”) unless the pregnant woman’s life is in danger. The statute, which was enacted in 2003, was immediately challenged in several lower federal courts, all of which cited Stenberg in issuing injunctions barring enforcement of the act. In Carhart and Planned Parenthood, the 8th and 9th U.S. Circuit Courts of Appeals, respectively, specifically ruled that the federal law was unconstitutional because it did not contain an exception in cases in which the mother’s health (not just her life) was in danger. The 9th Circuit also found that the language of the law was too vague and thus could unintentionally ban other types of abortion procedures.

The Bush administration, which is defending the federal law banning the procedure, argues that an abortion statute that omits a health exception is not automatically invalid and only runs afoul of prior Supreme Court precedent if it would create ‘significant health risks” for a woman seeking to terminate her pregnancy. In this case, the administration argues, Congress included significant factual findings in the statute showing that partial birth abortion “is never medically necessary.” The high court has traditionally given deference to legislative findings, the administration says, and should do so in this case as well.

The Planned Parenthood Federation of America, which is a party in the case, and other abortion rights advocates counter that the Supreme Court should let stand the lower court decisions striking down the federal statute. They contend that Stenberg and other cases plainly require an explicit health exception and that the D&X procedure is often medically necessary. They also argue that the congressional findings were tainted by political considerations and should neither outweigh Supreme Court precedent nor be accepted as an accurate description of the D&X procedure.