In his new book, Überpower: The Imperial Temptation of America, Josef Joffe offers an analysis of the danger and burden of America’s standing as a singular global power. He also investigates the similarities between classical anti-Semitism and the recent rise of anti-Americanism throughout the world. Joffe was interviewed following an event on Capitol Hill co-sponsored by the Pew Forum and the Council on Foreign Relations.

What is the “imperial temptation” facing America? 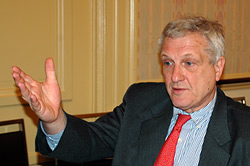 I would describe the imperial temptation with a metaphor: “Gulliver Unbound.” Gulliver is the United States, and unbound means liberated from the discipline and the fetters applied to America by another superpower, the Soviet Union. For 40 years the Soviet Union counterbalanced and neutralized American power, thus inspiring a sense of caution in the United States and imposing some limits on the use of that power. Neither side lifted its sword against the other. Never was a single shot fired against the other in anger.

So the book analyzes the consequences of that seminal, transforming event that took place on Christmas Day, 1991 — a day that has been all but forgotten. That’s the day the Soviet Union committed suicide by self-dissolution and the hammer and sickle flag over the Kremlin was lowered for the last time. End of Soviet Union, rebirth of a much diminished Russia. And suddenly Gulliver was alone. So what did Gulliver do?

He used massive force in the First Iraq War of 1990-1991. He went to war in Afghanistan. He did so for a second time against Iraq in 2003 with an ambitious agenda of regime transformation. The U.S. surely would not have gone to war so close to the underbelly of the Soviet Union while Soviet power was still intact. Iraq was actually an informal ally of the Soviet Union. So “imperial temptation” refers to the use of power without a major, existential risk.

One of your most interesting and central theses seems to be that anti-Semitism and anti-Americanism travel together. How are the two linked? And do you see this linkage becoming stronger or weaker?

Both nations are the two most powerful players in their neighborhoods — Israel regionally, the U.S. globally. Those two nations are a force of change, of modernity. Certainly, the United States has always been a steamroller of modernity and at no time more so than now, in this age of globalization that is easily conflated with “Americanization.” Israel plays a similar role locally, in the sense that it stands forth as a symbol of technological, economic and military success, against neighbors who have failed to keep up with modernity. That resentment is one thing that unites the two “isms.”

Another connection is this: A classic trope of anti-Semitism is the excessive, globe-encircling power Jews are said to have. This image has now segued nicely into the perception that Jews have “conquered” America and have the most powerful country in the world at their beck and call. This, in fact, is the idea purveyed by the piece “The Israel Lobby,” authored by Professors. Mearsheimer and Walt: America’s Jews have taken control of America’s Middle East policy.

But the most important thing, I think, is that Jews and Americans have always acted as forces of rampant change that has rolled over ancient traditions and dispensations and thus threatened traditional status and power structures. If you represent the forces of an anonymous market, you are bound to anger those players who profit from privilege and entrenched position. The Church did not like Jews charging interest, and today, European businesses and labor unions resent America as a Behemoth who forces down walls of protection. Jews were blamed for the evils of capitalism in earlier centuries. Americans are blamed for globalization, that is, technological and economic change to the max, in our days.

Have anti-Americanism and anti-Semitism always traveled together?

No, because America is so much younger than anti-Semitism. But they are structurally similar. Anti-Americanism means hostile, negative stereotyping — the ascription of enormous power and the accusation of conspiracy — look how many people believe that the Twin Tower attack was the doing of American authorities. Those are structural features of anti-Semitism, too — subversion and conspiracy. America is seen to rule the world. America wants to inflict itself on the rest of the world, trying to subvert the rest and to remake it in its own image.

Negative stereotyping. Demonization. Conspiracy. Excessive power. And, if you wish, the element of eliminationism: If we could only get rid of the Jews, evil will be lifted and salvation will be ours. So Jews are expelled from England for 400 years and from Spain after 1492. And I don’t need to mention the Holocaust.

The classical themes have been imported lock, stock and barrel into the Arab world. It is all made in the West. Look at their books, at their cartoons, at their television series. They attribute to the Jews the most horrifying crimes, like blood libel, which first showed up in Christian anti-Semitism: slaughtering Christian children for ritual purposes. Now it is Muslim children. The interesting point here is that Jews have a horror of blood, hence the practice of “kashrut,” which seeks to remove the last drop of blood from the meat of slaughtered animals.

Do you see any new twists in the Islamic world on this classical anti-Semitism?

I suppose the new twist is the recent Turkish movie, “Valley of the Wolves.” The blood libel theme becomes modernized, so to speak, by depicting an American-Jewish doctor as harvesting organs from Muslims, which are to be sold in America and Israel. There you have the conjunction again. You kill and mutilate not for God, but for gain.

There’s been an intense debate around the March publication of “The Israel Lobby and U.S. Foreign Policy” that you mentioned, authored by John Mearsheimer and Stephen M. Walt [Kennedy School of Government Working Paper, No. RWP06-11, March 13, 2006] and allegations that it is anti-Semitic. Is it?

These two academics are not anti-Semitic. I’ve known them for 15 years each, and I’ve worked with them. But the piece is anti-Semitic because it replicates all these tropes and topics that are classics of anti-Semitism. What does the paper do? It tells us Jews have too much power. They use this power sub rosa; they use it in a conspiratorial way. They subvert the national interest, they engage in double loyalty — indeed, treason, because they work for a foreign country. Like all such screeds devoted to an obsessive idea, it is bad research and bad thinking because it systematically excludes contrary evidence, such as how often the U.S., supposedly in thrall to the Jews, has opposed Israel from the Suez War of 1956 onward. If I received a paper like that, I would have flunked the students — not because I did not like their opinion but because it displayed sloppy research and lack of knowledge of the field.

Can one be anti-Israel without being anti-Semitic?

Theoretically yes, but in practice it is very hard. If you’re anti-Israel, what are you against? You are against the right of the Jewish people to their own state — a right you would doubtlessly accord to Montenegro or Luxemburg, to name but two tiny states. Isn’t that anti-Jewish? It is a murky field where hard facts are difficult to come by because so many dynamics are subconscious. But I often wonder whether Westerners who gloss over Palestinian terrorism, or even accept it as the “weapon of the weak,” are pro-Palestinian or are in fact anti-Israel.

You argue that the target of anti-Americanism is not the policy but the polity. It’s not what we do, but who we are. If this is the case, what can the United States do to quell this anti-Americanism, aside from ceasing to exist?

Some anti-Americanism is endemic for the reasons mentioned earlier; a smaller, variable part is policy-related. So a change in behavior and rhetoric helps. Maybe a bit less provocative language from Don Rumsfeld. Maybe more attention to the needs and sensitivities of other nations. Maybe more responsibility and less gung-ho-ism. Emphasize the common rather than the strictly national interest. Let’s put it this way: The schoolyard bully never gets elected class president. He’s just strong and fearsome. If you want to be a leader, you can’t just use your muscles. You have to take care of others and make them trust you.

If the U.S. changes its policy so that it’s more acceptable, can it stop the anti-Americanism?

As I said, America will always rile the soul because it is the steamroller of modernization and so seductive, to boot — which is why all the world eats, drinks, listens, dresses and watches American. Nobody has ever driven a Frenchman into a McDonald’s at gunpoint. What makes them wear Levi’s and watch American blockbusters? And why does everybody want to attend Harvard or Stanford? America is seductive. It is one big demonstration effect, as sociologists call it when they want to avoid a normative term like model. We don’t like the seducer, and we don’t like ourselves and others for yielding to temptation. Should America stop being one big “demonstration effect?” Nor can America give up the enormous power that triggers both fears and resentments. But it could act in ways that inspire more trust in this enormous power than has the current administration.

You referred to the de-Christianization of Europe. Has this contributed to the anti-Semitism or anti-Americanism that you describe?

The progressive secularization of Europe has an impact on anti-Americanism because nonreligious Europeans see this country as a fallback to an era Europe has transcended. Europeans pride themselves in having overcome what they see as a premodern mindset, as proof of irrationality and superstition. When George W. Bush admits to praying, it sounds like Joan of Arc listening to voices in her head. So American religiosity is one more item on the American agenda that estranges the Old World from the New World. But that is an old story. When Talleyrand escaped to Philadelphia from the terror of the Revolution, he carped, “Thirty religions and only one dish to eat!”