Twitter is one of many online venues where politicians and the public can go to engage with the issues of the day, but it can be difficult to identify ordinary Americans among the many other types of accounts on the site. This analysis offers a window into the behaviors of U.S. adults on Twitter who identify with one of the two major U.S. political parties. To identify U.S. adults on the platform (as distinct from organizational accounts or those belonging to users in other countries) and examine their Twitter behaviors, the Center fielded two separate surveys of U.S. adults in which respondents were asked to volunteer their Twitter handle for research purposes. After removing invalid handles and those whose accounts were set to private, this process produced a set of 3,518 U.S. adults with valid, public accounts whose Twitter activity could be matched to their survey responses, including to their stated party affiliation.

The data used to describe how U.S. Twitter users differ from all U.S. adults is taken from a survey of 9,220 U.S. adults conducted Aug. 31-Sept. 7, 2020. Everyone who completed the survey is a member of Pew Research Center’s American Trends Panel (ATP), an online survey panel that is recruited through national, random sampling of residential addresses. This way nearly all U.S. adults have a chance of selection. The surveys are weighted to be representative of the U.S. adult population by gender, race, ethnicity, partisan affiliation, education and other categories.

Each of these components are described in greater detail in the report Methodology.

Entering the peak of the the 2020 election season, social media platforms are firmly entrenched as a venue for Americans to process campaign news and engage in various types of social activism. But not all Americans use these platforms in similar ways. A new Pew Research Center analysis of U.S. adults’ Twitter behaviors finds that Democrats and Republicans have notable differences in how they use the site – from how often they tweet to the accounts they follow or mention in their own posts. 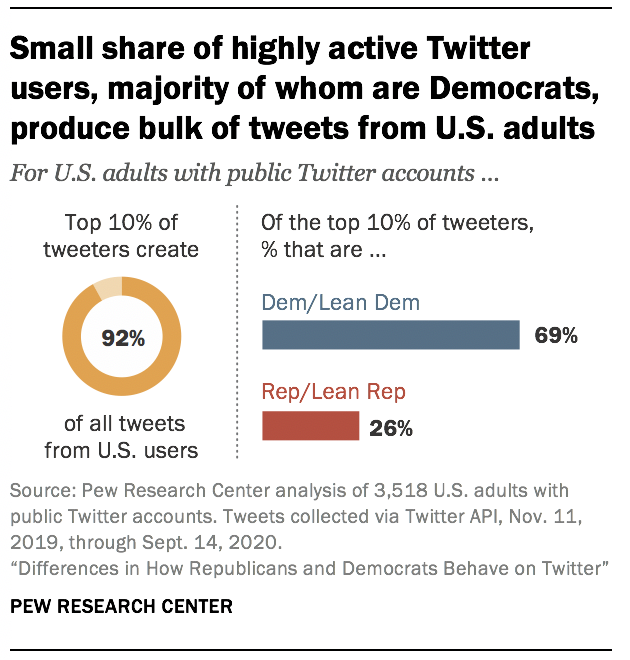 Most U.S. adults on Twitter post only rarely. But a small share of highly active users, most of whom are Democrats, produce the vast majority of tweets. The Center’s analysis finds that just 10% of users produced 92% of all tweets from U.S. adults since last November, and that 69% of these highly prolific users identify as Democrats or Democratic-leaning independents.

A number of factors contribute to this phenomenon. Previous Twitter analyses by the Center have found that the platform contains a larger share of Democrats than Republicans. And in addition to being more prevalent on the site in general, the 10% most active Democrats typically produce roughly twice as many tweets in a month (157) as the 10% most active Republicans (79).

Across both parties, those who use Twitter differ in several ways compared with non-users. For instance, Twitter-using Democrats and Republicans alike tend to be younger and have higher levels of educational attainment compared with members of each party who do not use the platform.

Although nearly identical shares of Republican Twitter users (60%) and non-users (62%) describe themselves as very or somewhat conservative, Democrats who use Twitter tend to be more liberal than non-users. Some 60% of Democrats on Twitter describe their political leanings as liberal (with 24% saying they are “very” liberal), compared with 43% among those who are not Twitter users (only 12% of whom say they are very liberal).

Many other popular accounts are followed primarily by those who identify as either Democrat or Republican. However, a small number of the most-followed accounts on Twitter (mostly popular celebrities or entertainers) are followed by similar shares of U.S. adults belonging to each party.

Democratic and Republican Twitter users differ in several consistent ways compared with members of each party who do not use the platform. Most notably, Democrats and Republicans on the site (incuding political independents who “lean” toward either party) tend to be younger and more highly educated than fellow Democrats or Republicans who are not Twitter users. 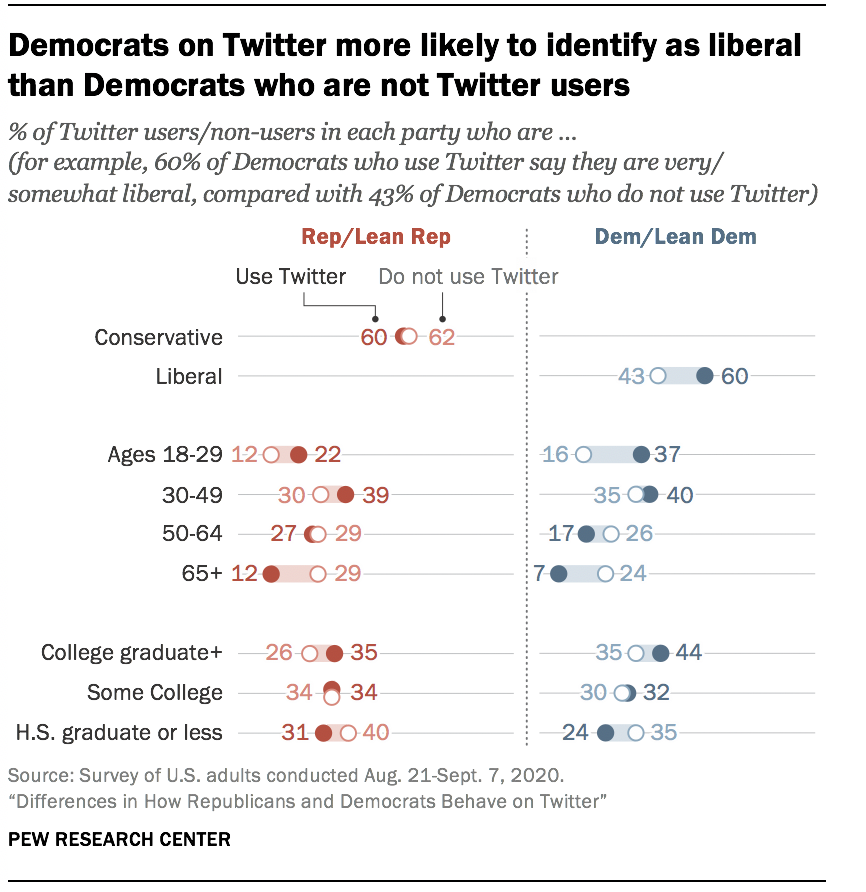 In addition to being younger, the Twitter-using contingent of each party contains a larger share of college graduates – and a lower share of those with a high school diploma or less – relative to those who are not Twitter users. And for Democrats and Republicans alike, Twitter users are more likely than non-users to say they use a variety of other online social platforms.

At the same time, these differences between Twitter users and non-users are not always consistent across parties. Most notably, Twitter-using Democrats include a much larger share of self-identified political liberals than Democrats who are not on the platform (60% vs. 43%). But among Republicans, self-identified conservatives make up a nearly identical share of Twitter users and non-users (60% vs. 62%).

Minority of U.S. adults on Twitter create bulk of all tweets, and Democrats make up a majority of this highly active group 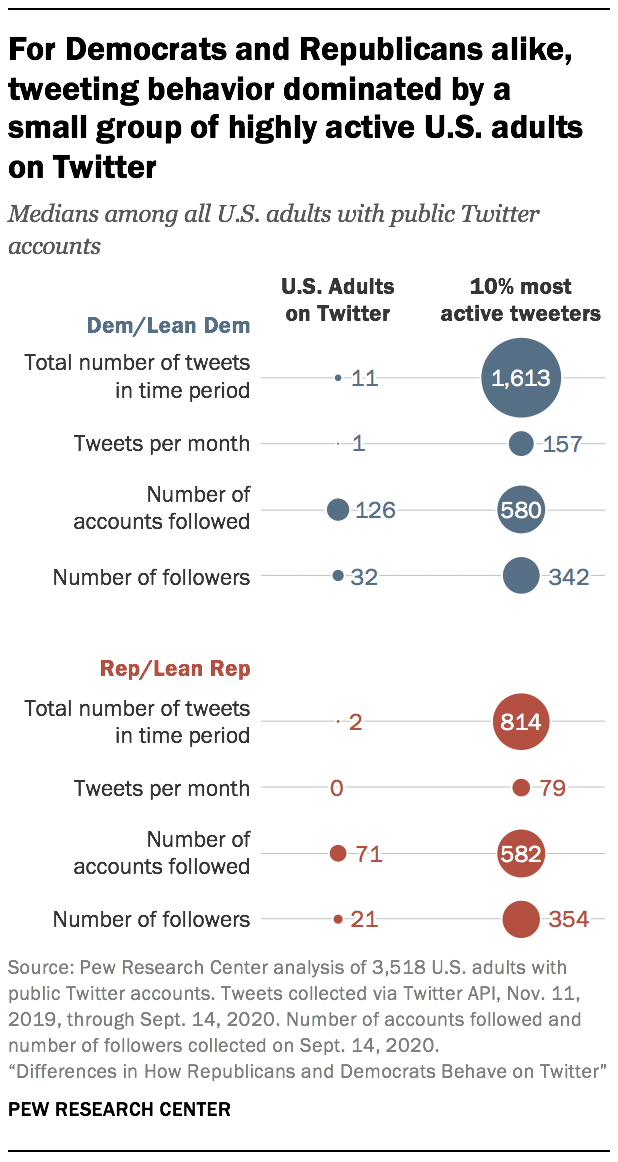 Regardless of party, most Twitter users tweet very infrequently. The median U.S. adult Twitter user tweeted just once per month during the time period of the study. The median Democrat posts just one tweet per month, and the median Republican has no monthly tweets. Similarly, the typical adult on the platform – regardless of party – has relatively few followers. The median Democrat is followed by just 32 other people, while 21 other users follow the median Republican.

Although members of both parties tweet relatively rarely, Democrats are more active users when it comes to other aspects of their Twitter behavior, such as the number of accounts they follow. The median Democrat on Twitter follows 126 other accounts, 1.8 times as many as the number followed by the median Republican (71).

Moving beyond the behaviors of the median or typical user, a small share of highly prolific tweeters produce the vast majority of tweets (a finding that is consistent with previous research from the Center). During the period in which this study was conducted, the 10% most active users on the site produced an estimated 92% of all tweets from U.S. adults. And of these highly active users that produce the bulk of content on the site, more than two-thirds (69%) are Democrats while 26% are Republicans.

Presidents, other major political figures rank among the most-followed accounts by U.S. adults

U.S. adults on Twitter follow a wide range of other users on the site. The 3,518 Twitter users in this analysis follow a total of almost 750,000 unique accounts. For the most part, there is very little overlap in the accounts that different users follow. Only 10,151 of these 750,000 accounts are followed by more than 10 users in this sample. But some high-profile accounts – typically public figures from entertainment and politics – are followed by substantial shares of U.S. adults on the site.

This is especially true for the Twitter accounts of the current and preceeding president. Former President Obama (@BarackObama, followed by 31% of U.S. adults) and President Trump (@realDonaldTrump, 20%) are among the most-followed individual accounts by U.S. adults on the platform. And these two accounts are also the most “distinctive” to Twitter users from each party. Some 42% of Democrats and Democratic leaners on Twitter follow Obama, 30 percentage points higher than the 12% of Republicans who do so. Similarly, 35% of Republicans – but just 13% of Democrats – follow Trump’s personal account.

A number of other popular accounts from the world of politics are followed largely by users from one party or the other. Notable examples include Rep. Alexandria Ocasio-Cortez (@AOC) and Fox News personalities Tucker Carlson (@TuckerCarlson) and Sean Hannity (@seanhannity).

This analysis also highlights the extent to which members of each party are following their own party’s presidential candidates, as well as those from the other party. (Note: In contrast to the preceding analysis that was based on individual accounts, this analysis includes any account – whether official or unofficial – belonging belonging to each candidate.) 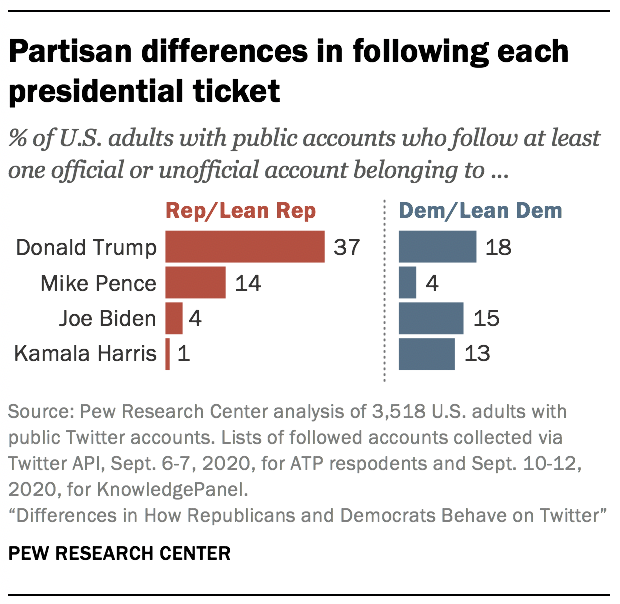 Among Democrats, former Vice President Joe Biden and Sen. Kamala Harris are followed by similar shares of users. But among Republicans, a substantially larger share follows Trump than follows Vice President Mike Pence. And although relatively small shares of users follow candidates from the other party, nearly one-in-five Democrats (18%) follow at least one account associated with Trump – comparable to the shares who follow each member of the Democratic presidential ticket. 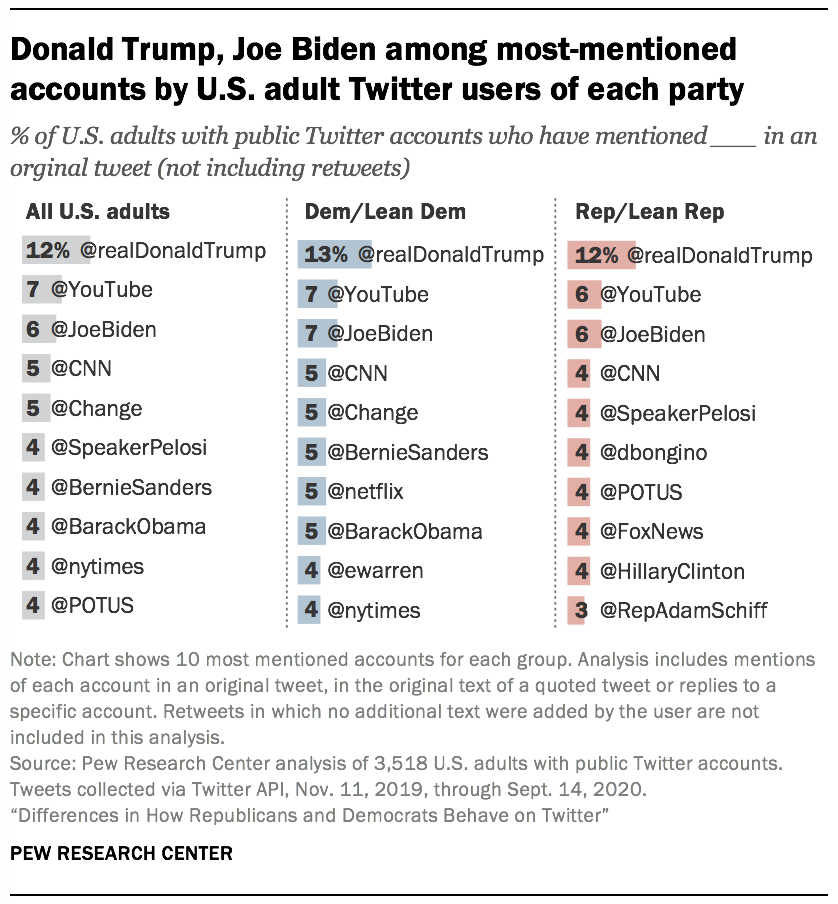 As is true of the accounts they follow, U.S. adults on Twitter mention a wide range of other users on the site. In the 10 months included in this analysis, respondents in this study mentioned a total of just over 218,000 distinct Twitter accounts in their own tweets. This figure and the analysis that follows includes accounts mentioned in original tweets, in the original text of quoted tweets, or in replies to a specific account. But it does not include retweets in which no additional text was added by the user.

And as is also true of the accounts they follow, a small subset of these accounts were mentioned at least once during this time period by a notable share of all U.S. adults on Twitter. Trump (@realDonaldTrump) was mentioned by 12% of U.S. adults on that platform during that period – and by comparable shares of Democrats (13%) and Republicans (12%). Biden (@JoeBiden) and the video-sharing site YouTube (@YouTube) also rank among the three most mentioned accounts during this period for Democrats and Republicans alike.

There are also modest differences in the top hashtags used by members of each party, although no single hashtag was used by more than 5% of U.S. adults on Twitter over the study period. The most common hashtags during that time include #BlackLivesMatter, hashtags related to the COVID-19 pandemic (#covid19, #coronovirus), Twitter-related updates (#mytwitteranniversary, #newprofilepic) and those related to various marketing (#sweepstakes, #contest, #giveaway).

A pronounced difference between Democrats and Republicans relates to use of the #BlackLivesMatter hashtag. Some 4% of Democrats on Twitter used this hashtag at least once between Nov. 11, 2019, and Sep. 14, 2020, but just 1% of Republicans did so.

National Politics on Twitter: Small Share of U.S. Adults Produce Majority of Tweets
The Whys and Hows of Generations Research
Majority of Americans Confident in Biden’s Handling of Foreign Policy as Term Begins