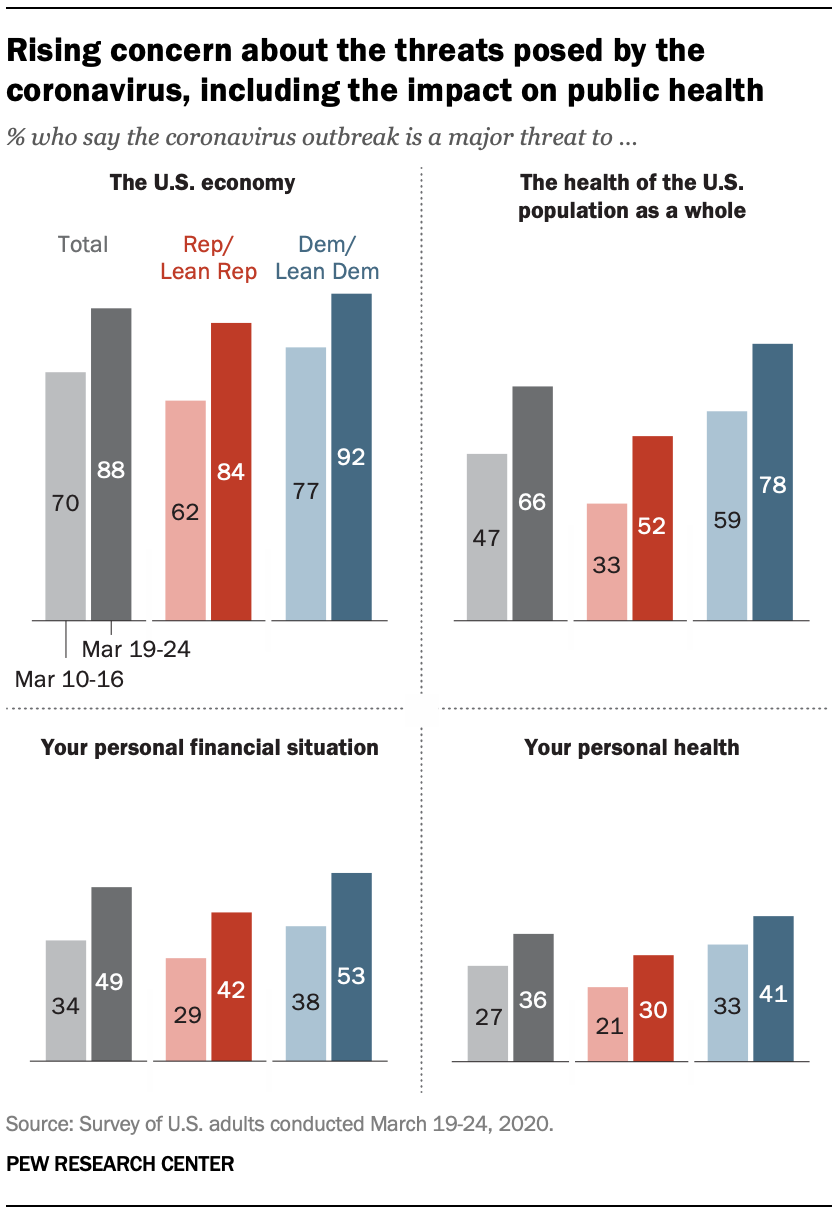 The public continues to see the coronavirus outbreak as presenting more serious threats to the nation than to them personally.

About half (49%) say the virus is a major threat to their own personal finances; another 40% say it is a minor threat. When it comes to personal health, more say the coronavirus presents a minor (52%) than major (36%) threat.

Democrats and Democratic leaners remain more likely than Republicans and Republican leaners to say the coronavirus outbreak is a major threat across all four areas of concern tested in the survey. For instance, 78% of Democrats say the coronavirus is a major threat to the health of the U.S. public, compared with 52% of Republicans. However, over the past few weeks, both groups have become significantly more likely to say the virus presents major threats to all four items in the survey. 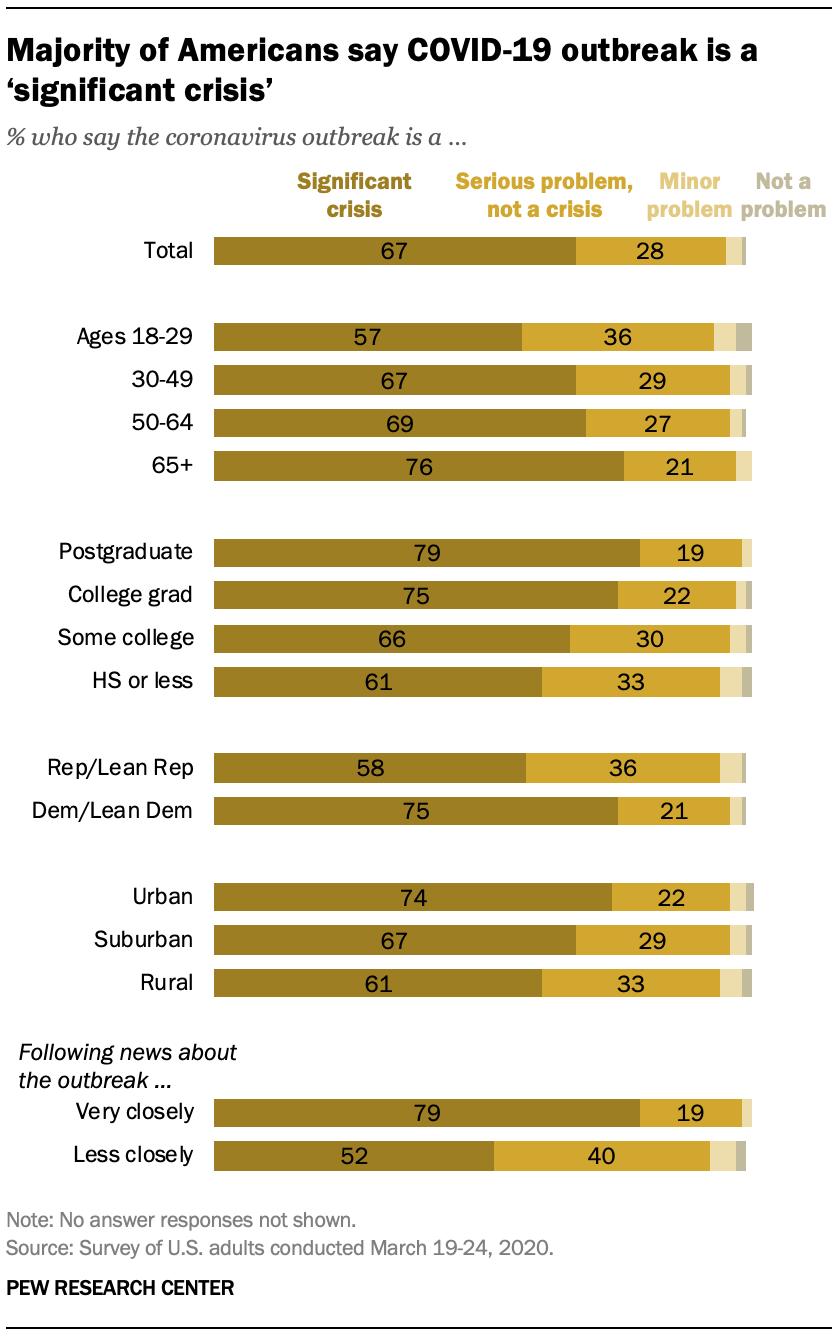 Reflecting widespread concerns about the threats posed by the coronavirus, 67% describe the outbreak as a significant crisis; far fewer describe it as a serious problem, but not a crisis (28%), and just 4% say it is a minor problem or not a problem at all.

A larger share of Democrats (75%) than Republicans (58%) view the outbreak as a significant crisis for the country.

Older people (ages 65 and older), those with at least a college education, those following news about the outbreak very closely and people in urban areas are especially likely to describe the coronavirus outbreak in the most serious terms and call it a significant crisis.

The national – and personal – economic impacts of the coronavirus 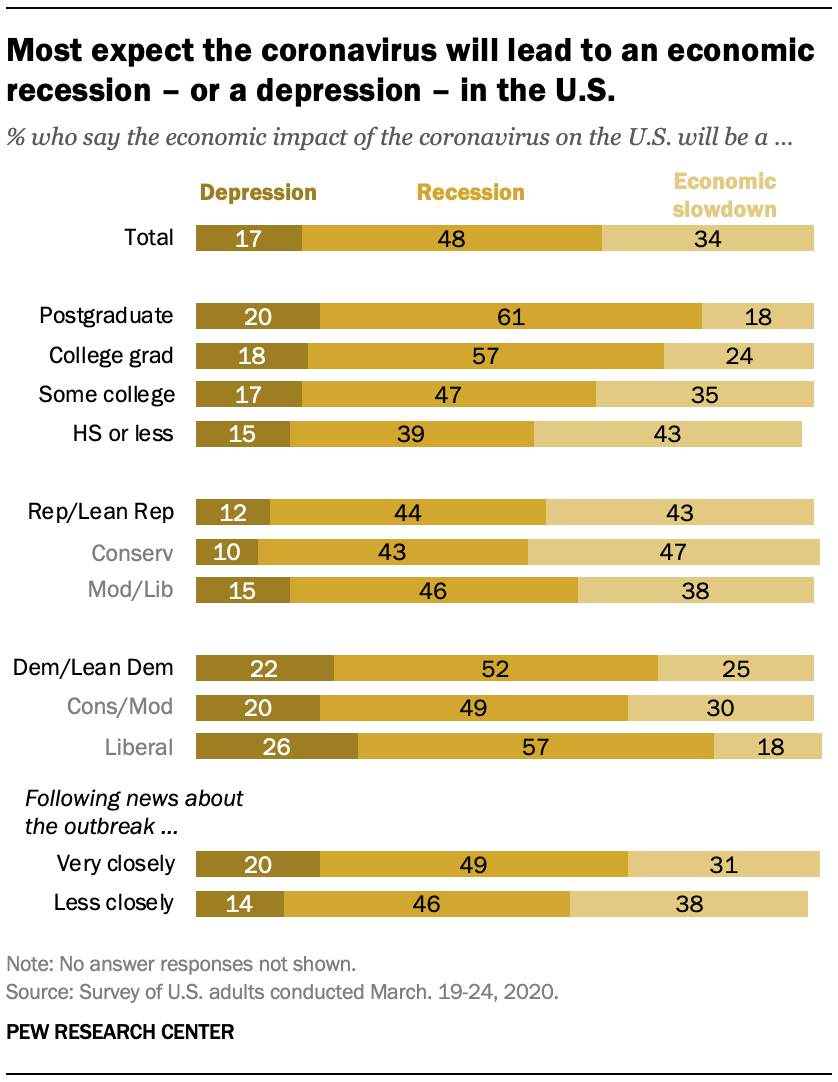 Republicans and Republican leaners are less likely to expect a severe economic impact than Democrats and Democratic leaners, though majorities of both groups expect the U.S. to suffer a recession or a depression. 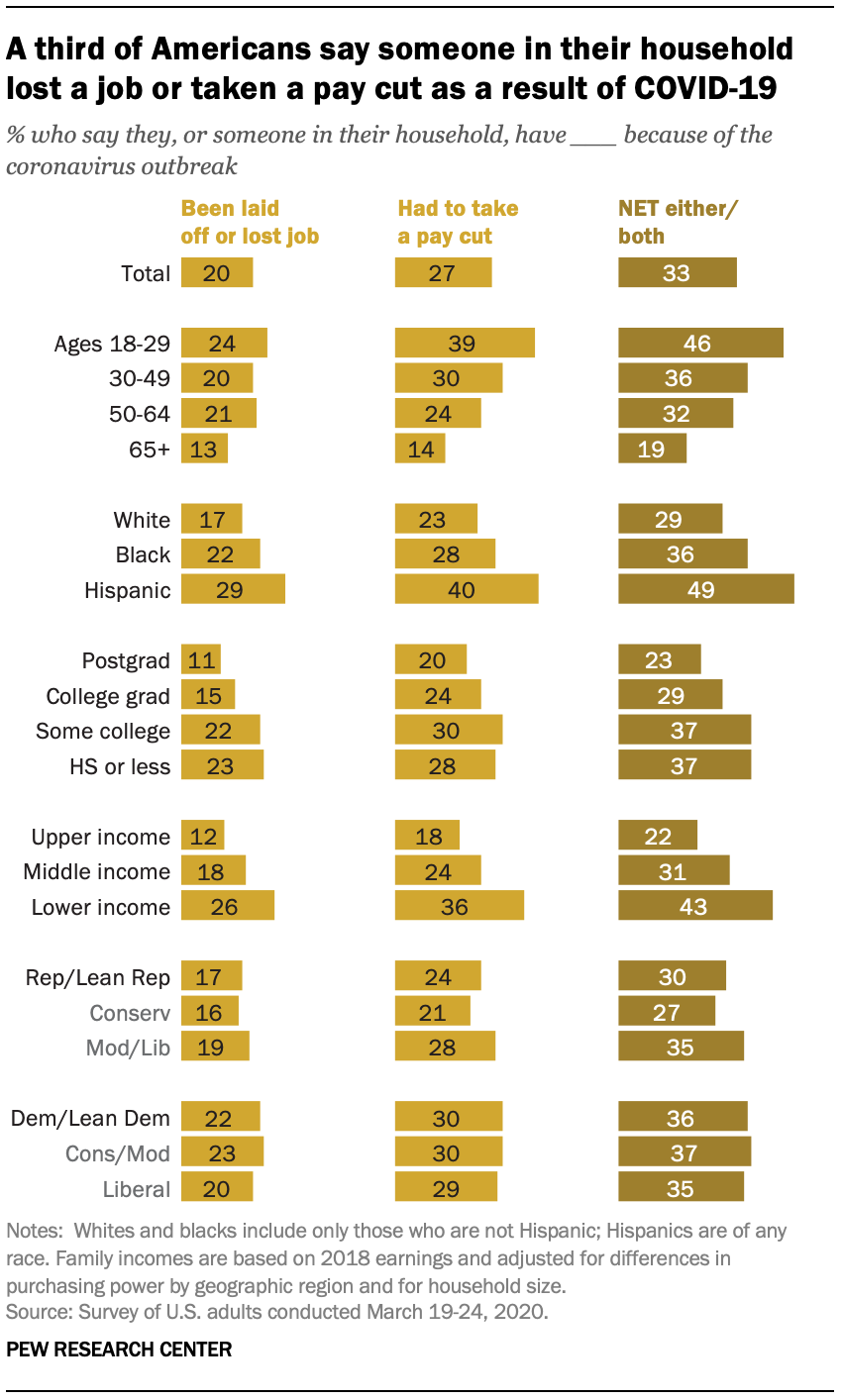 Taken together, 33% say they, or someone in their household, have lost a job or taken a pay cut (or both) because of the coronavirus outbreak.

Nearly half of Hispanics (49%) say their household has had someone lose their job or take a pay cut because of the COVID-19 outbreak. Smaller shares of black (36%) and white (29%) people say the same.

Lower-income Americans are almost twice as likely as upper-income Americans to say they or someone in their household has taken a pay cut or lost a job because of the coronavirus (43% vs. 22%). About a third (31%) of middle-income people say this has happened to them or someone in their household. (See appendix for more details on how income tiers are defined.)

Views on the personal health threat posed by the coronavirus 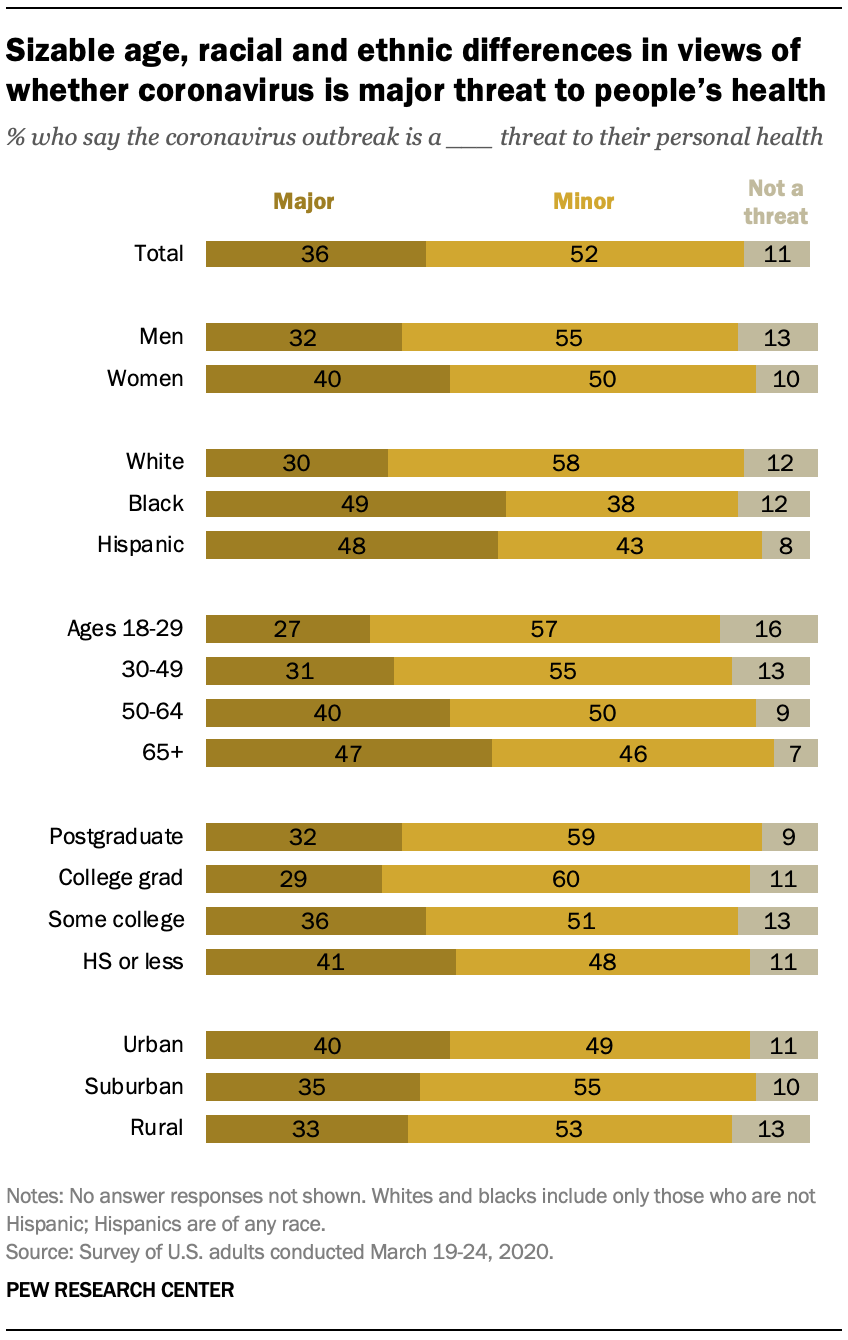 Most Americans view the coronavirus as a threat to their own personal health, though more view it as a minor (52%) than major (36%) threat; just 11% say it is not a threat.

Older adults and black and Hispanic people are especially likely to say the coronavirus is a major threat to their own personal health.

Nearly half of black people (49%) and Hispanics (48%) say the coronavirus is a major threat to their own health. Among white people, 30% say this.

Next: 2. Views of how officials, public have responded to COVID-19
← Prev Page
Page1You are reading page2Page3Page4Page5
Next Page →

Americans who primarily get news through social media are least likely to follow COVID-19 coverage, most likely to report seeing made-up news
Americans Immersed in COVID-19 News; Most Think Media Are Doing Fairly Well Covering It
Most Americans are confident hospitals can handle the needs of the seriously ill during COVID-19 outbreak
Most Americans Say Federal Government Has Primary Responsibility for COVID-19 Testing
U.S. Public Sees Multiple Threats From the Coronavirus – and Concerns Are Growing