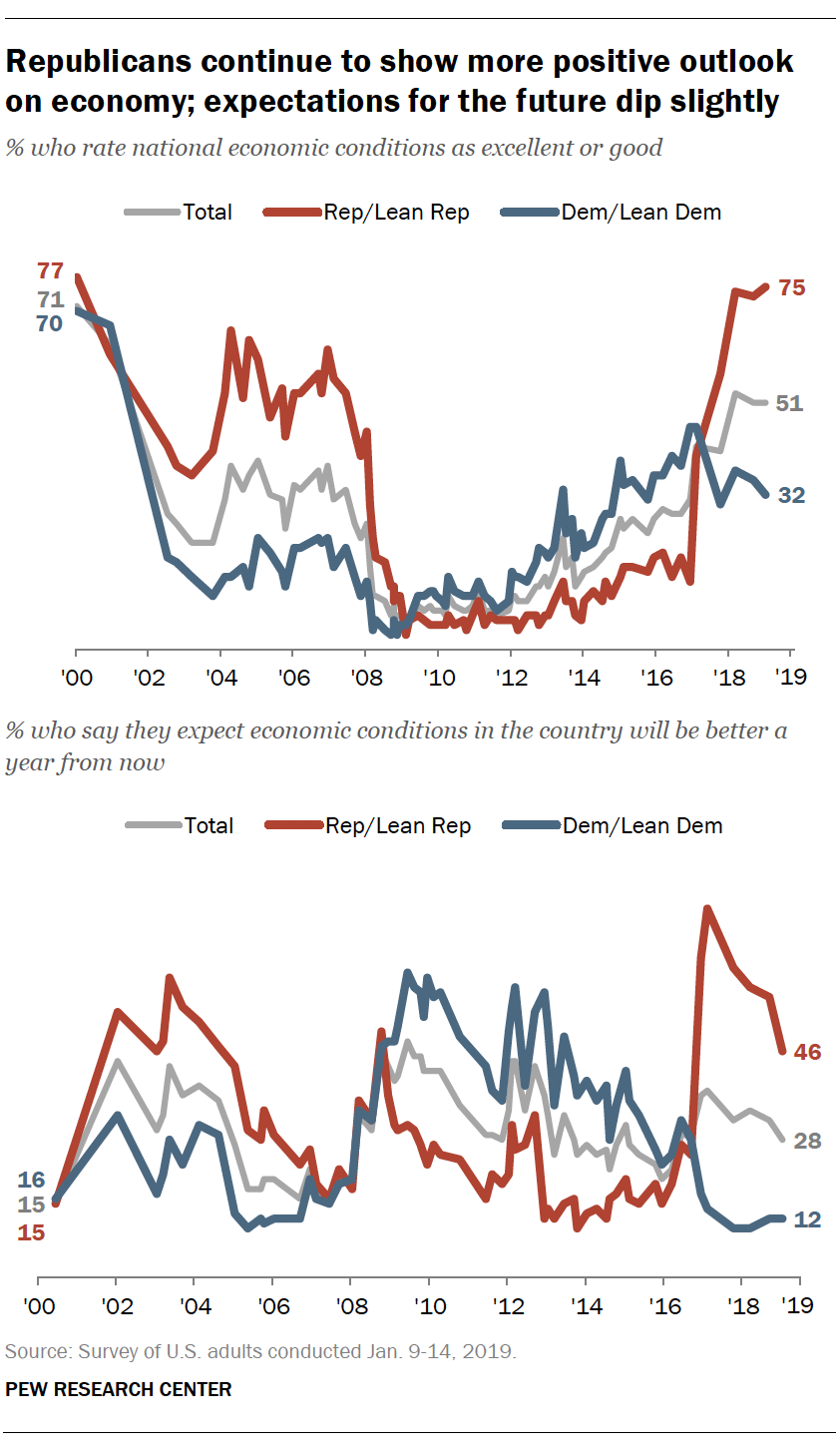 Republicans also remain more optimistic than Democrats in expectations for the economy a year from now: 46% expect economic conditions will be better a year from now, while just 12% of Democrats say this. 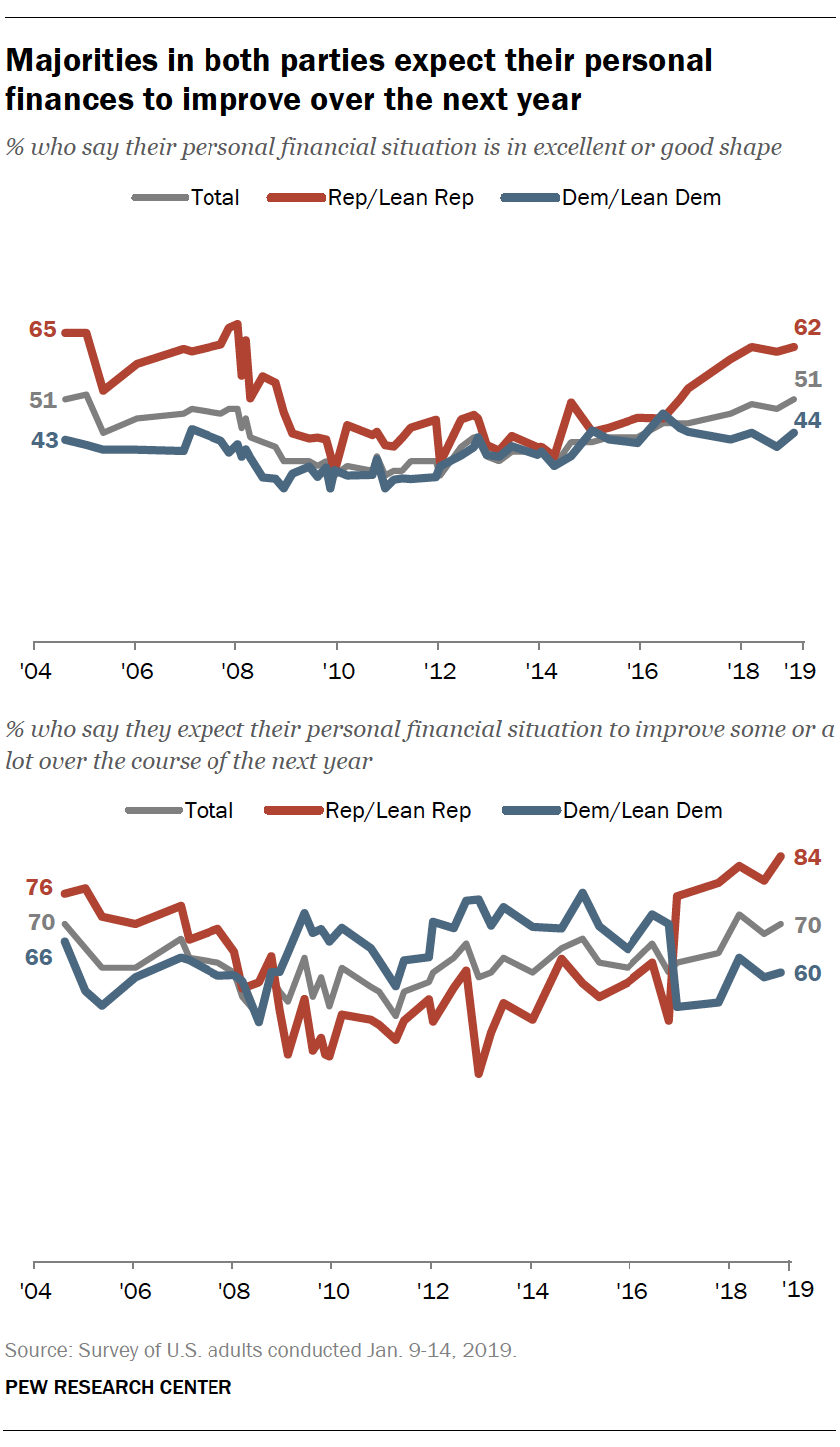 As was the case in September, there is a sizable partisan gap in these views. Republicans continue to be more likely than Democrats (62% vs. 44%) to rate their personal financial situation as excellent or good.

Republicans also remain more likely than Democrats (84% to 60%) to say they expect their finances to improve over the next year.

Majority now says ‘there are plenty of jobs available’ 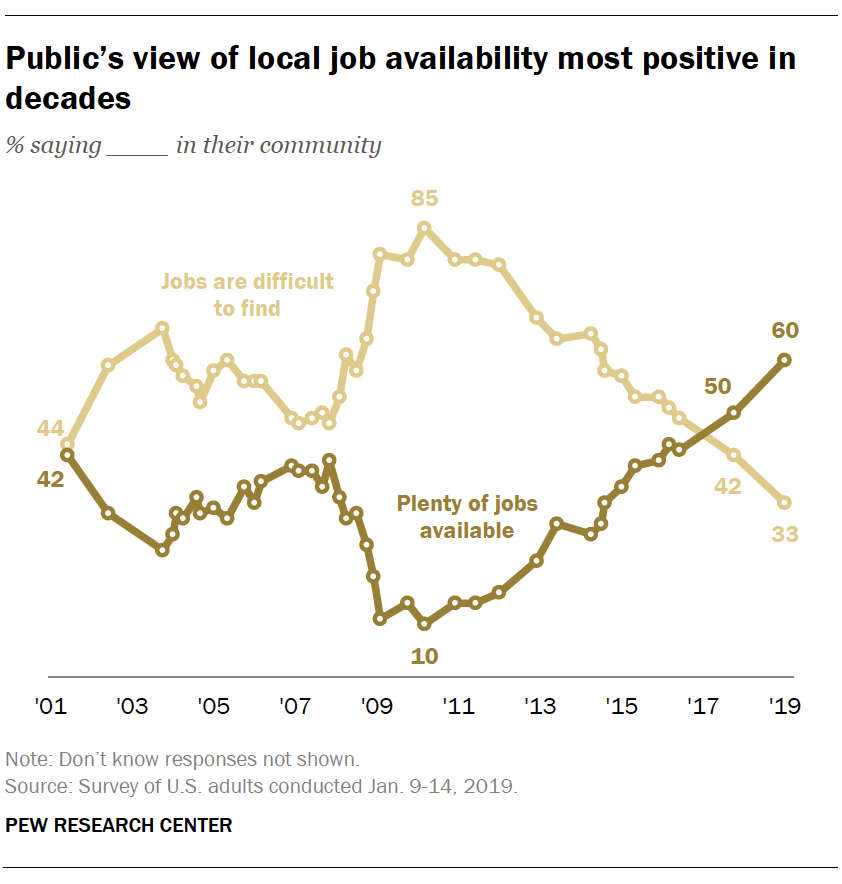 Six-in-ten adults now say there are plenty of jobs available in their local community – the highest share recorded since the question was first asked in 2001. Just a third say that jobs are difficult to find.

Positive views of the availability of jobs locally has risen since the question was last asked in October 2017, generally tracking with more positive views of the economy over this period. Then, half of adults said there were plenty of jobs available where they live, while 42% said jobs were difficult to find. 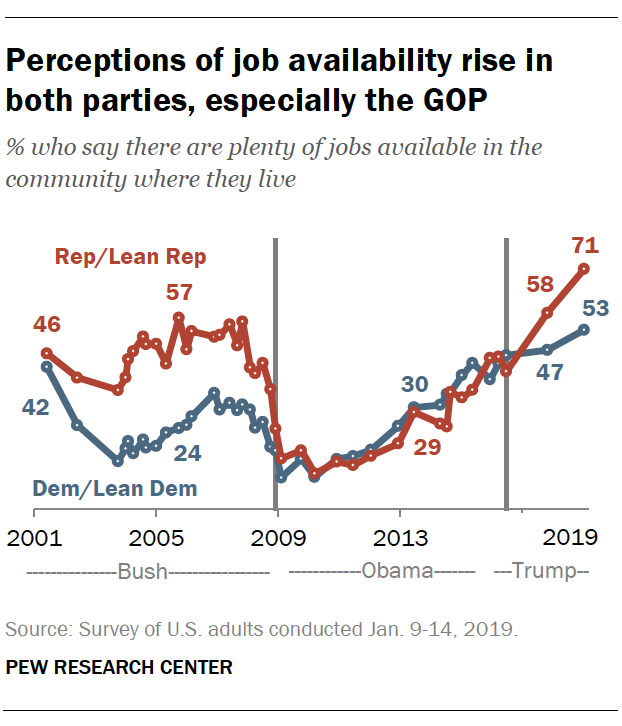 As is the case with other economic measures, there is a sizable partisan gap in views of job availability. Currently, 71% of Republicans say there are plenty of jobs available, compared with 53% of Democrats. In October 2017, 58% of Republicans and 47% of Democrats viewed jobs as widely available locally.

In both parties, views of local job opportunities are among the most positive as at any point in the last two decades.

Though a majority of adults say there are plenty of jobs available in their communities, a separate question finds that “good jobs” are seen as less widely available 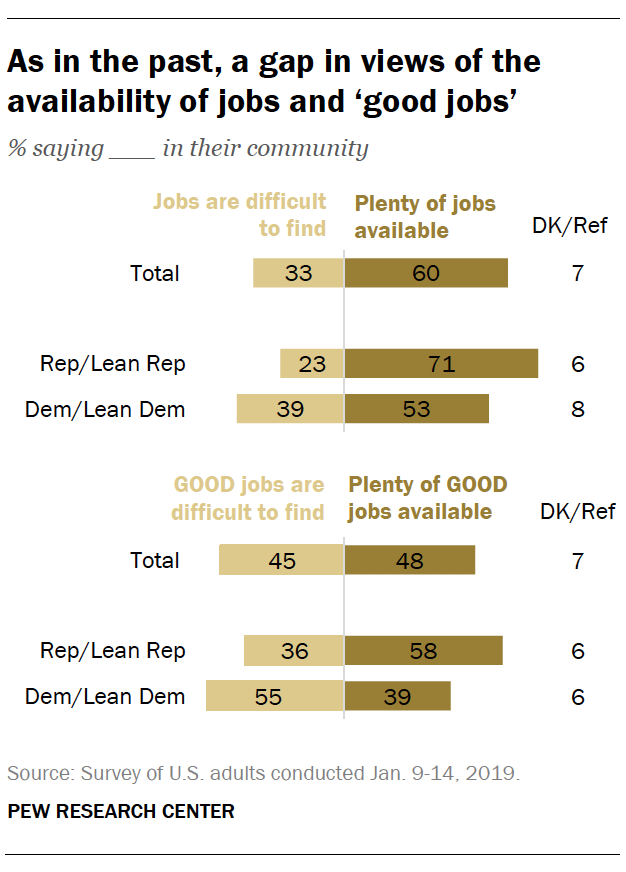 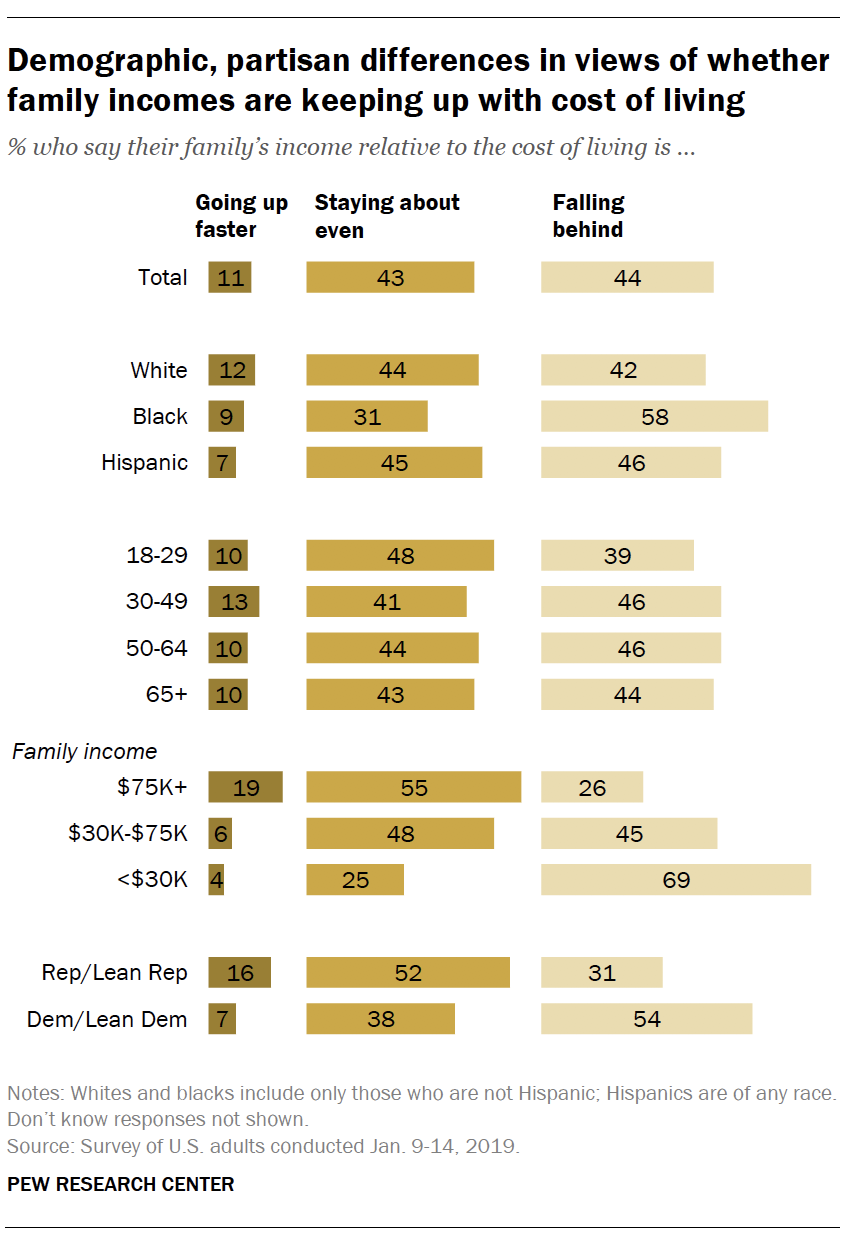 A majority of Americans (54%) say either that their family’s income is going up faster than the cost of living (11%) or staying about even (43%). About four-in-ten (44%) say their incomes are falling behind the cost of living.

These evaluations are somewhat more positive than in recent years. In October 2017, 49% said their incomes were at least keeping pace with the cost of living.

There are substantial demographic differences in these evaluations. For instance, 58% of blacks say their family’s income is falling behind the cost of living – much higher than the percentages of whites (42%) or Hispanics (46%) who say this.

Views of Wall Street’s impact on the economy 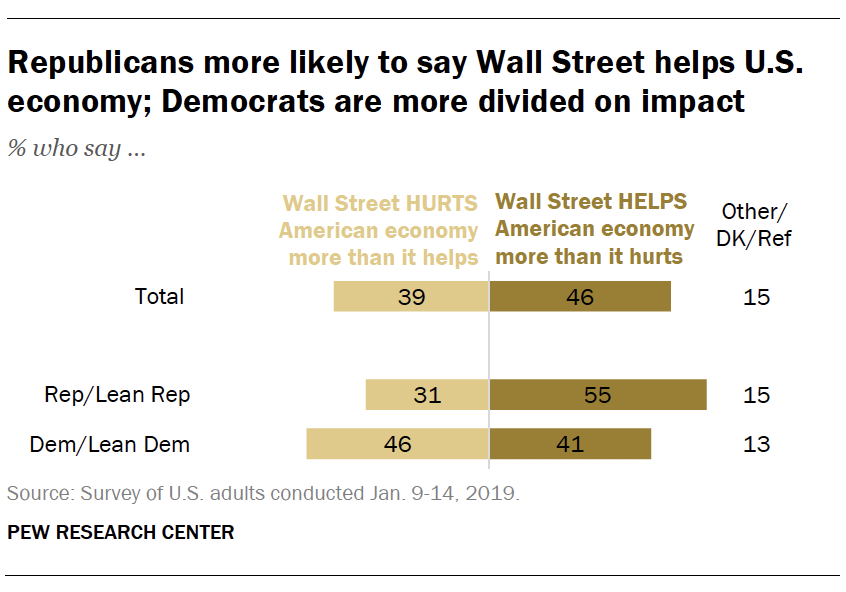 As in the past, these views are divided along partisan lines. More Republicans say that on balance, Wall Street helps the economy more than it hurts it (55% vs. 31%). 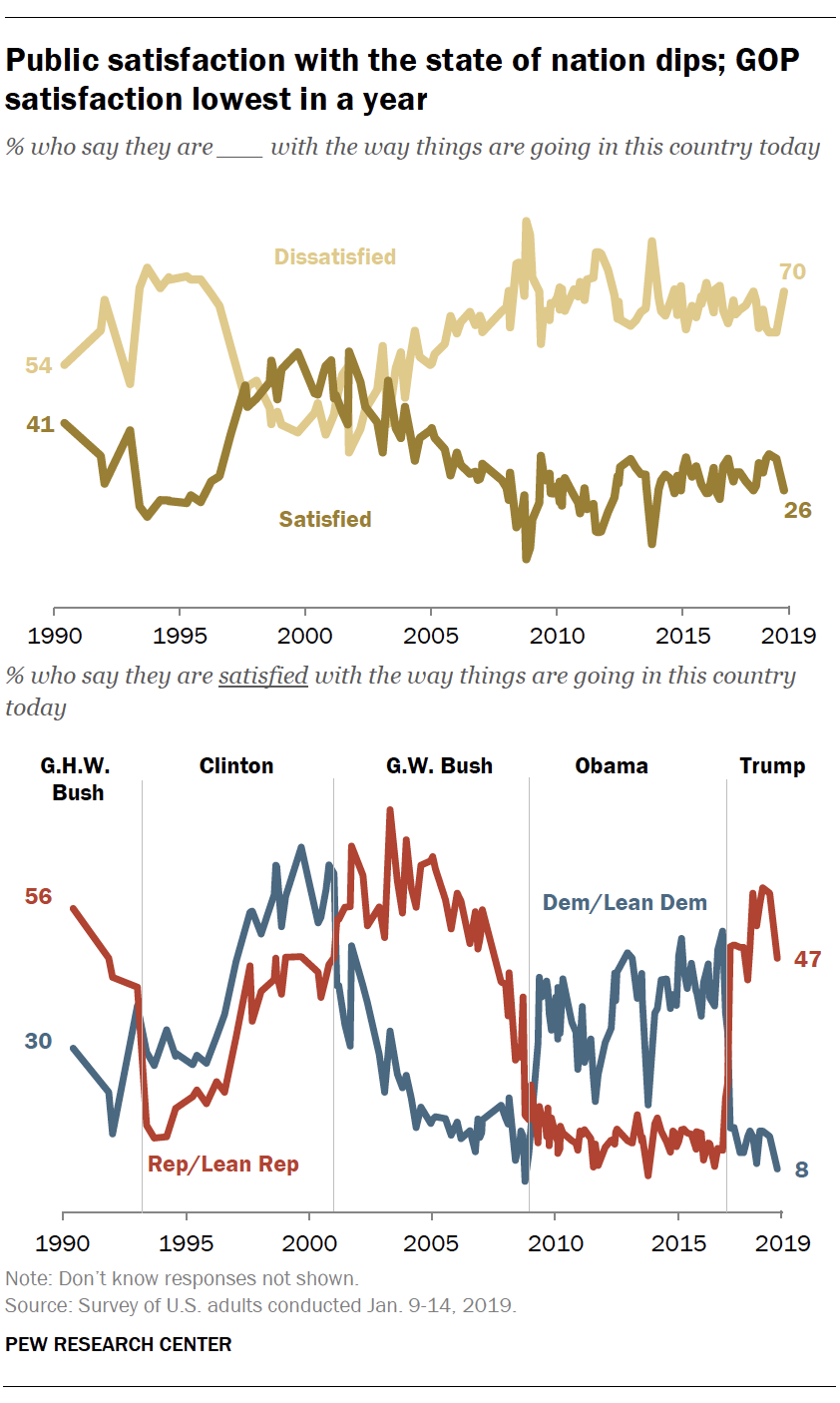 Seven-in-ten Americans now say they are dissatisfied with the way things are going in this country, while only about (26%) say that they are satisfied.

Public dissatisfaction with the state of the nation is higher than at any point in the past year, and it has increased 9 percentage points since September (when 61% of adults said they were dissatisfied).

Just 8% of Democrats now say they are satisfied with the state of the nation, while 90% express dissatisfaction. While satisfaction among Democrats has dropped modestly since September (from 14%), no more than 16% of Democrats have expressed satisfaction with the way things are going in the country at any point during Trump’s presidency.