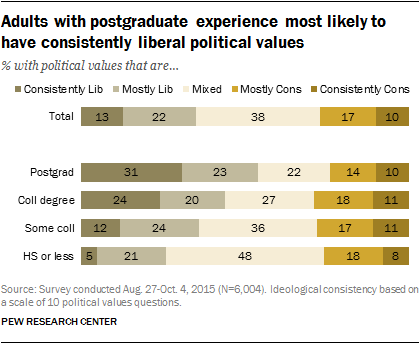 Highly educated adults – particularly those who have attended graduate school – are far more likely than those with less education to take predominantly liberal positions across a range of political values. And these differences have increased over the past two decades.

More than half of those with postgraduate experience (54%) have either consistently liberal political values (31%) or mostly liberal values (23%), based on an analysis of their opinions about the role and performance of government, social issues, the environment and other topics. Fewer than half as many postgrads – roughly 12% of the public in 2015– have either consistently conservative (10%) or mostly conservative (14%) values. About one-in-five (22%) express a mix of liberal and conservative opinions.

Among adults who have completed college but have not attended graduate school (approximately 16% of the public), 44% have consistently or mostly liberal political values, while 29% have at least mostly conservative values; 27% have mixed ideological views.

Over the past decade, ideological differences across generations also have widened. Millennials remain more liberal than older generations – 45% express consistently liberal or mostly liberal views, which is little changed from 2004 (41%). In contrast, growing shares of the oldest cohorts – Boomers and Silents – have conservative political values. About a third of Boomers (36%) and 40% of Silents have at least mostly conservative attitudes, up from 21% and 23%, respectively, in 2004.

This analysis is based on a survey conducted last fall among more than 6,000 adults, and draws from data on Pew Research Center surveys going back to 1994. Responses to 10 political values questions – covering opinions about government performance, the social safety net, the environment, immigration, homosexuality and other topics – asked together in each of these surveys were combined to create a scale of ideological consistency.

As Pew Research Center’s 2014 report on political polarization found, the share of the overall public that is ideologically consistent – that is, the share that takes either consistently liberal or consistently conservative positions opinions across the 10 values – is relatively modest, but has grown substantially over time, especially over the past decade. 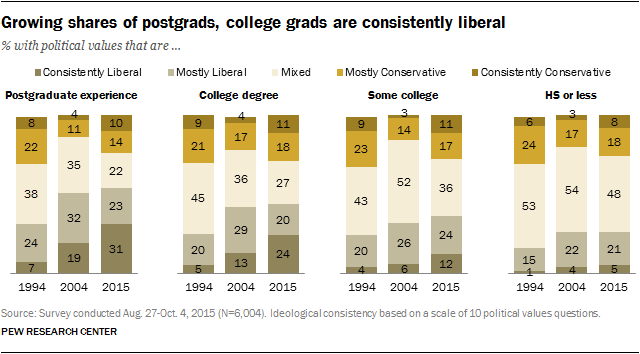 Much of the growth in ideological consistency has come among better educated adults – including a striking rise in the share who have across-the-board liberal views, which is consistent with the growing share of postgraduates who identify with or lean toward the Democratic Party .

Among postgrads and college graduates, the shares expressing consistently conservative views also have grown since 2004, from 4% to 10% among postgrads and from 4% to 11% among college graduates. But among both groups, consistently conservative views are at the about the same levels as they had been in 1994.

Across all educational categories – and among the public generally – the shares of Americans who take a roughly equal number of liberal and conservative positions have declined over the past two decades. But the declines have been more pronounced among postgraduates (from 38% to 22%) and college graduates (45% to 27%), than among those with some college experience (from 43% to 36%) or those with a high school degree or less education (from 53% to 48%).

Overall, 38% of the public expresses a mix of liberal and conservative positions. In both 1994 and 2004, nearly half (49%) had mixed attitudes. As our 2014 polarization study found, Republicans and Democrats increasingly are on opposite sides of the ideological spectrum. 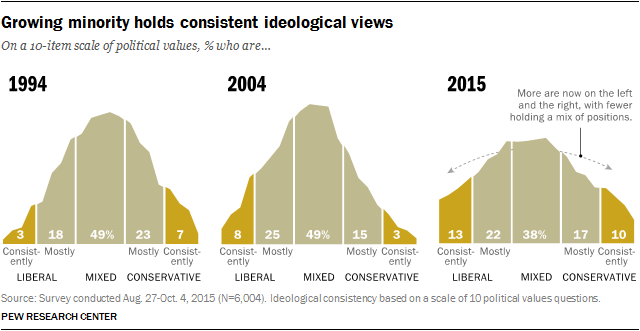 Most Democratic postgrads are consistently liberal 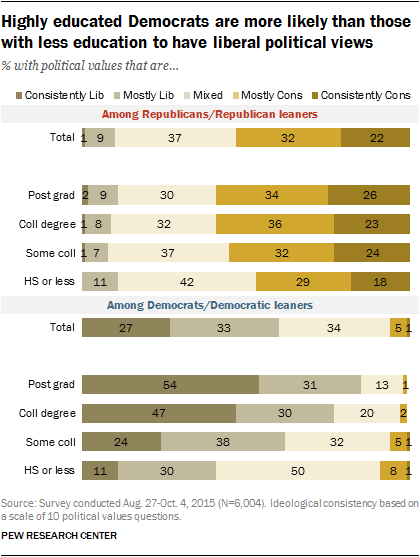 Over the past two decades, the increase in consistently liberal views has been most pronounced among highly-educated Democrats and Democratic leaners.

By contrast, far smaller shares of Democrats with some college experience (24%) and no more than a high school education (11%) are consistently liberal, and there has been less change over the past two decades.

The change in attitudes among Republicans and Republican leaners has followed a very different trajectory over the past two decades. As noted in the 2014 Polarization report, the overall share of Republicans with predominantly conservative political values declined between 1994 and 2004, before rebounding in recent years. This pattern is seen across all educational categories. 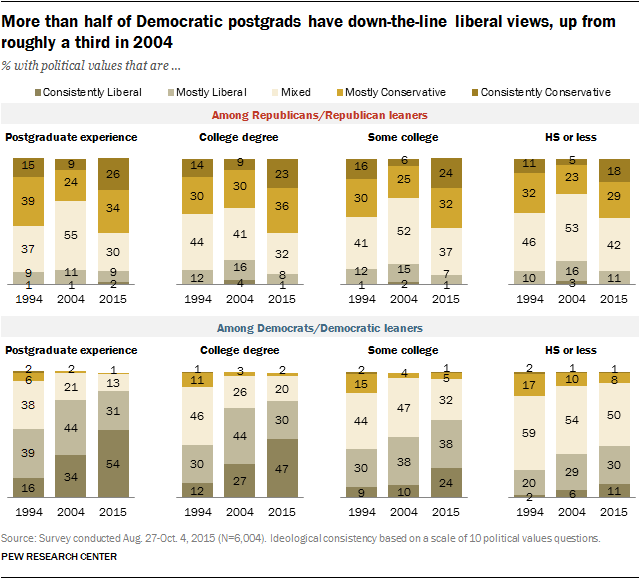 Moreover, the gap in ideological consistency among Republicans with different levels of educational attainment is much smaller than among Democrats. In the new study, comparable shares of Republican postgrads (26%), college graduates (23%), and those with some college experience but no diploma (24%) express consistently conservative values, as do 18% of Republicans with a high school degree or less education. In contrast, there is a 43-precentage-point gap in the shares of Democratic postgrads (54%) and Democrats with no more than a high school education (11%) that express consistently liberal attitudes. 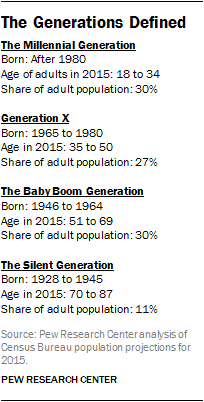 There are wide generational differences in political values, based on the 10-item scale. Millennials continue to be considerably more liberal than older generations. (For more on ideological differences across generations, see “The GOP’s Millennial Problem Runs Deep.”) 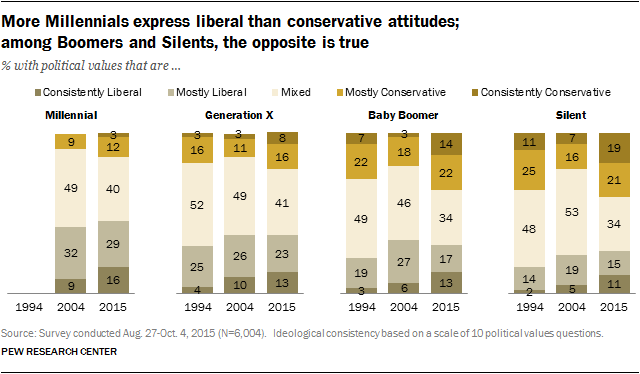 Notably, while there are wider ideological differences among Democrats than Republicans by levels of educational attainment, Republicans are more deeply divided along generational lines. 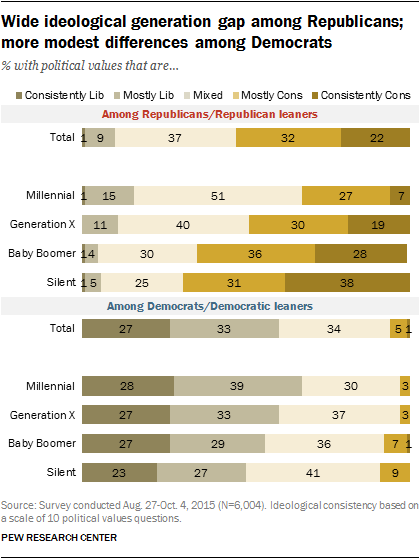 Sizable majorities of older Republicans – 64% of Boomers and 69% of Silents – have at least mostly conservative attitudes across the 10-item scale. More than a quarter of Republican Boomers (28%) and 38% of Republican Silents give down-the-line conservative responses. Both groups have become substantially more conservative over the past decade.

There are smaller generational differences among Democrats, although Millennial Democrats (66%) are somewhat more likely than those in older generations to have liberal political values. Nearly identical shares across each cohort of Democrats – 28% of Millennials, 27% of Gen Xers and Boomers, and 23% of Silents – express consistently liberal views. Among the three older cohorts of Democrats, the numbers with consistently liberal attitudes has increased substantially over the past two decades. 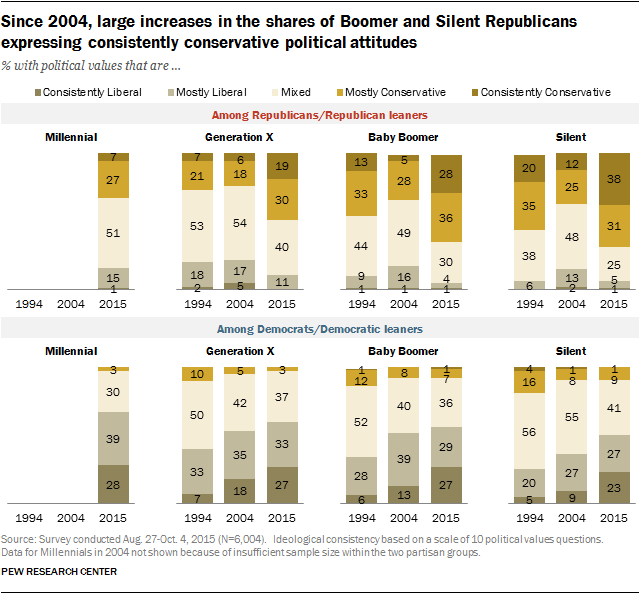 Partisan divides have widened on many political values 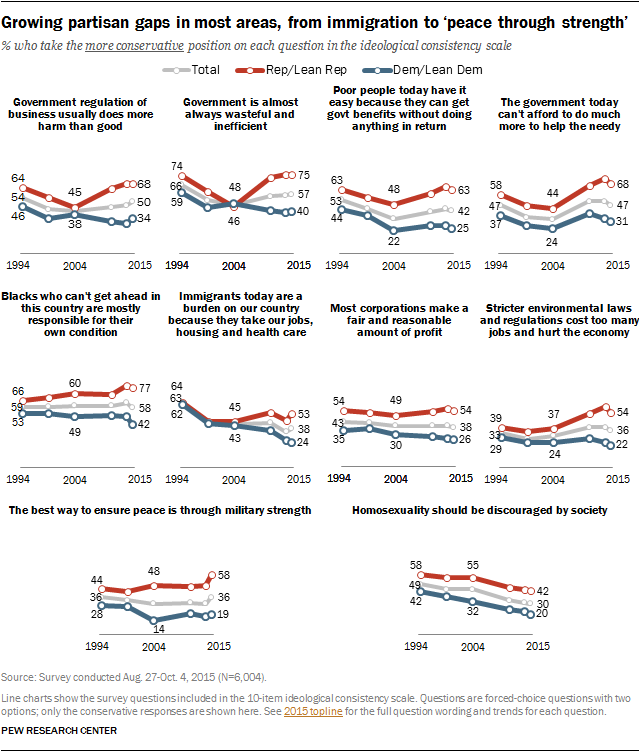 As noted in the 2014 report, partisan divisions have increased over the past two decades on most of the measures that make up the 10-item ideological consistency scale. In some cases, such as in opinions about the economic effect of stricter environmental laws, the differences were fairly modest 20 years ago; at that time, 39% of Republicans and 29% of Democrats said stricter environmental laws cost too many jobs and hurt the economy. In 2015, more than half of Republicans (54%) and just 22% of Democrats expressed this view.

Partisan differences over issues, by education and generation

As noted, Democrats with differing levels of education are more ideologically divided than Republicans, with some of the widest gaps on opinions about government regulation of business and race. Republicans are more divided along generational lines, especially in attitudes on homosexuality and immigration. 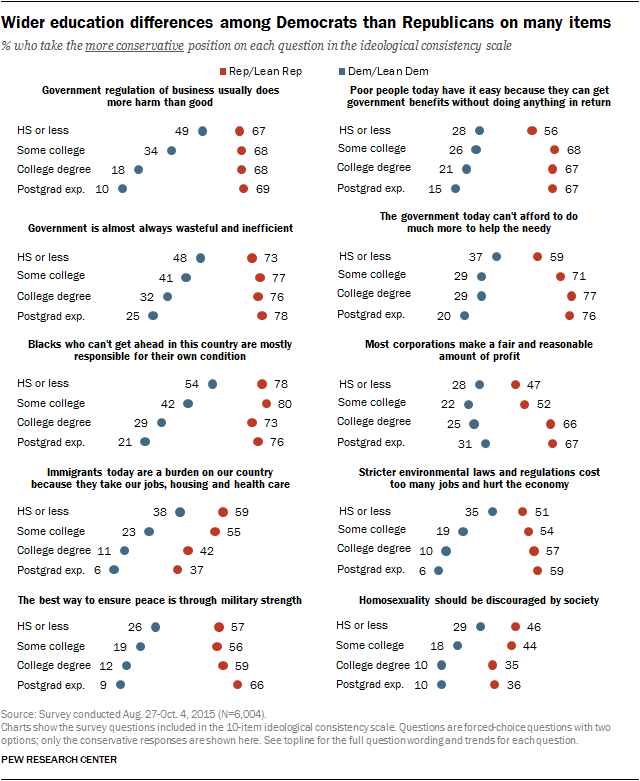 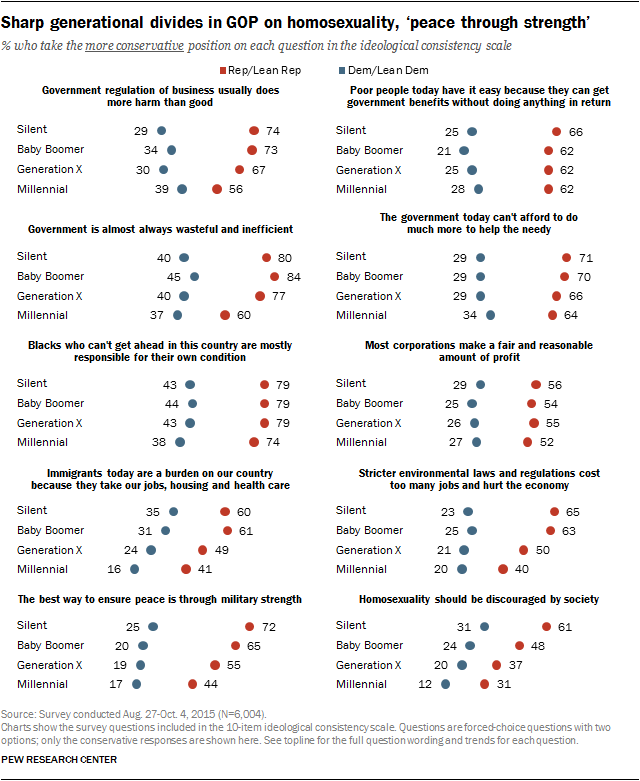 Republicans have doubts that colleges, K-12 schools are open to range of viewpoints

Republicans much ‘colder’ than Democrats in views of professors