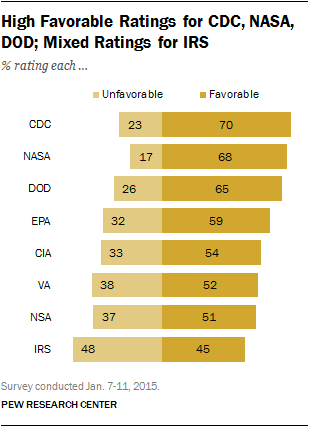 The public continues to express positive views of many agencies of the federal government, even though overall trust in government is near historic lows. Large majorities express favorable views of such government agencies as the Centers for Disease Control and Prevention (CDC), NASA and the Defense Department.

In fact, favorable opinions surpass unfavorable views for seven of eight government agencies tested – the IRS is the lone exception. In a survey last February, however, just 24% said they could trust the government in Washington always or most of time. (See this interactive for more on trust in government.)

While overall favorable ratings for most of the agencies tested have changed little over time, there has been a sharp decline in positive views of the Department of Veterans Affairs (VA). Currently, 52% have a favorable view of the VA, down 16 points since October 2013. The agency has been widely faulted for delays in health care for veterans; the scandal led to the ouster last year of VA Secretary Eric Shinseki.

As tax season begins, the public expresses mixed views of the Internal Revenue Service: 45% have a favorable opinion of the tax agency while 48% have an unfavorable view. Opinions of the IRS are little changed from October 2013. 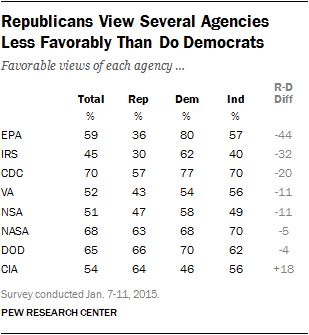 The survey finds wide partisan divides in views of many government agencies. Republicans hold less favorable views than Democrats of five of the eight federal agencies included in the survey. The CIA is the only agency included that Republicans view more favorably than Democrats. 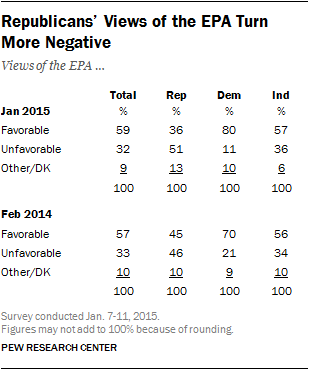 Fewer than half as many Republicans (36%) as Democrats (80%) have a favorable view of the Environmental Protection Agency (EPA). Republicans also offer less favorable ratings than Democrats of the IRS (32 points), CDC (20 points), VA (11 points) and NSA (11 points). By contrast, Democrats are 18 points less likely than Republicans to view the CIA favorably (46% vs. 64%).

Partisan differences have increased in opinions about both the EPA and the CIA. In February 2014, Republicans had mixed views of the EPA: Nearly as many had a favorable view of the agency (45%) as an unfavorable opinion (46%). Today, 51% of Republicans have an unfavorable impression of the EPA, while just 36% view it favorably. Democrats’ views of the EPA have become somewhat more positive over the past year (80% currently, 70% in February 2014). 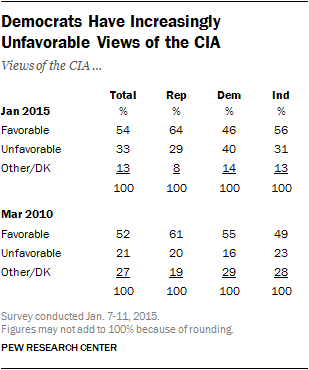 Democrats’ views of the CIA are more negative today than they were five years ago. In March 2010, there were only modest differences in opinions about the CIA among Democrats (55% favorable) and Republicans (61% favorable).

Lower Favorable Ratings for the VA 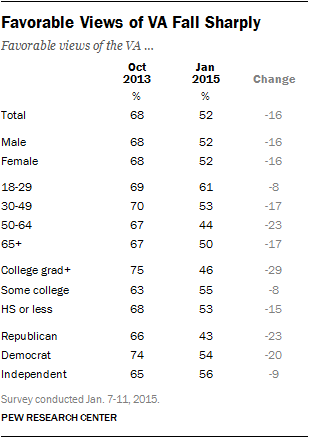 College graduates view the VA much less favorably than they did in October 2013. Favorable ratings of the VA are down 29 points among college graduates from 75% to 46%. The declines have been more modest among those with some college experience (eight points) and those with no more than a high school diploma (15 points).

Stark Partisan Differences in Opinions of the IRS

Views of the NSA Little Changed from 2013 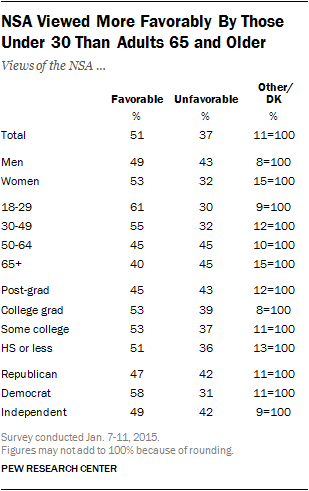 Favorability ratings for the National Security Agency (NSA) have changed little since the fall of 2013, shortly after former NSA analyst Edward Snowden’s revelations of the agency’s data-mining activities. About half (51%) view the NSA favorably, compared with 37% who have an unfavorable view.

Young people are more likely than older Americans to view the intelligence agency positively. About six-in-ten (61%) of those under 30 view the NSA favorably, compared with 40% of those 65 and older.

Most View the CDC Favorably; VA’s Image Slips
Survey ReportPartisan Views of Gov’t AgenciesLower Favorable Ratings for the VAStark Partisan Differences in Opinions of the IRSViews of the NSA Little Changed from 2013
About the Survey