In the aftermath of deadly terrorist attacks in Paris — and months after the start of U.S. airstrikes against ISIS — there has been little change in the public’s worries about an imminent terrorist attack in the United States. 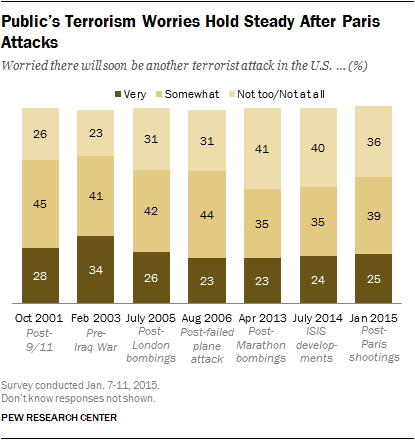 One-in-four (25%) are very worried about a domestic terrorist attack happening “soon,” while about four-in-ten (39%) are somewhat worried; 36% are not too worried or not at all worried. That balance of opinion has not significantly changed since last July. The long-term trend on terrorism concerns has been fairly stable, except on a few occasions, since the fall of 2001.

In addition, the public gives high ratings to the U.S. government’s anti-terrorism efforts. About seven-in-ten say the government is doing very well (22%) or fairly well (50%) in reducing the threat of terrorism. This is a substantial shift from early September 2014, when 56% positively rated the government’s job in this area, but in line with opinions dating back more than a decade.

The new national survey by the Pew Research Center, conducted Jan. 7-11 among 1,504 adults, finds that about half of the public (49%) is more concerned that the government’s anti-terrorism policies haven’t gone far enough to protect the country, while 37% are more concerned that these policies have gone too far in restricting civil liberties. This is little changed since September – amid growing concern over the threat from ISIS – but dramatically different from attitudes in 2013, following Edward Snowden’s disclosures about NSA surveillance.

Public attitudes about the possible use of torture against suspected terrorists have shown little change since the question was last asked in 2011. Currently, 20% say the use of torture against suspected terrorists to gain important information is often justified and 31% say it is sometimes justified. About half say it is rarely (20%) or never justified (27%).

A Pew Research Center survey last month, conducted after the release of the Senate Intelligence Committee report on the CIA’s interrogation practices after 9/11, found that 51% said the CIA’s methods were justified compared with 29% who said they were unjustified.

The Paris attacks drew more interest than any other news story last week. A news interest survey, conducted Jan. 8-11, finds that 29% say they followed news about the Paris attacks very closely, while 33% followed this news fairly closely; 36% tracked news from Paris not too closely or not at all closely. That is on par with interest in the Madrid train bombings in 2004 (34% very closely) and the Mumbai attacks in 2008 (also 29%). In July 2005, nearly half (48%) followed the London terror bombings very closely. (For more, see Fact Tank.) 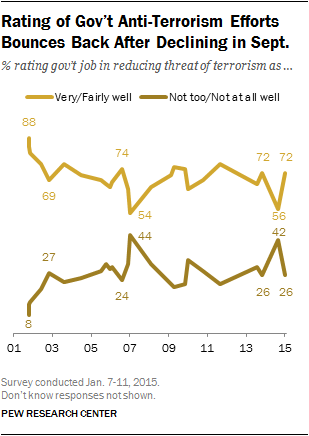 In early September — amid high-visibility beheadings by ISIS and prior to a primetime speech by President Obama outlining strategy for dealing with the terror group— the public had become more skeptical of the government’s ability to reduce the threat of terrorism. A narrow majority (56%) said the government was doing very well or fairly well in reducing the threat, which neared a post-9/11 low (54% in January 2007). 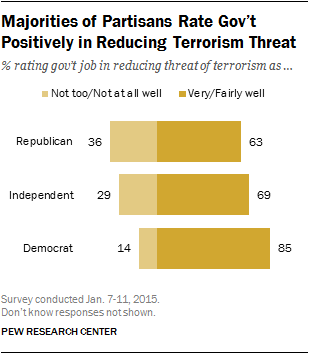 Currently, 85% of Democrats say the government is doing very or fairly well in reducing the terror threat, up 14 points since September. About six-in-ten (63%) Republicans give the government positive ratings; at that time, just 40% of Republicans said the government was doing well in addressing the of terrorism. 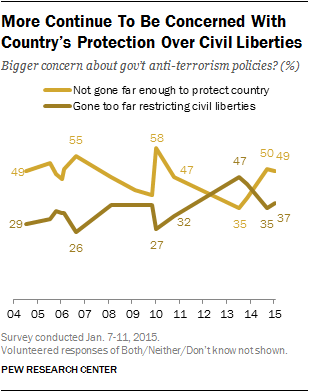 As was the case in September, more Americans (49%) say their bigger concern is that the government’s anti-terrorism policies have not gone far enough to adequately protect the country than that the policies have gone too far in restricting the average person’s civil liberties (37%).

This represents a change from July 2013, after Snowden’s NSA leaks, when 47% said they were more concerned about civil liberties than inadequate protection against terrorism (35%). The current state of opinion is closer to views between 2004 and 2010, when the public consistently expressed more concern about adequate anti-terrorism protection than restriction of the average person’s civil liberties. 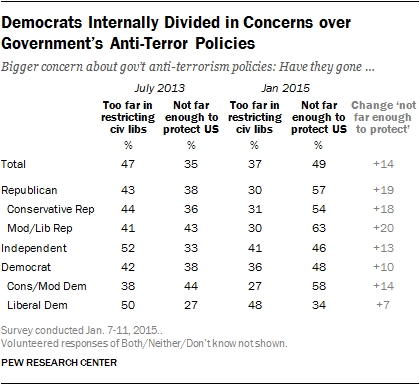 The shift in opinion since July 2013 has occurred across the board. By nearly two-to-one, Republicans are more concerned about anti-terrorism policies not going far enough to protect the country (57%) than about these policies placing too many restrictions on civil liberties (30%). In July 2013, by 43% to 38%, more Republicans expressed greater concern that anti-terror policies had infringed on civil liberties.

The share of Democrats expressing more concern about protection from terrorism has risen 10 points (from 38% to 48%) since July 2013. Democrats remain internally divided in concerns over the government’s anti-terror policies: Liberal Democrats, by 48% to 34%, worry more about these policies restricting civil liberties. By contrast, a majority of conservative and moderate Democrats (58%) say their bigger concern is that the policies will not go far enough in protecting the country.

Views of Torture of Suspected Terrorists 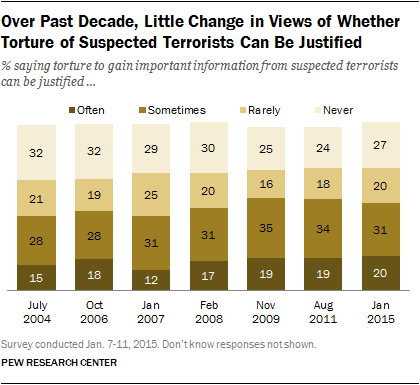 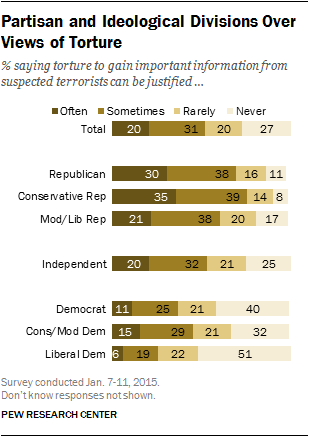 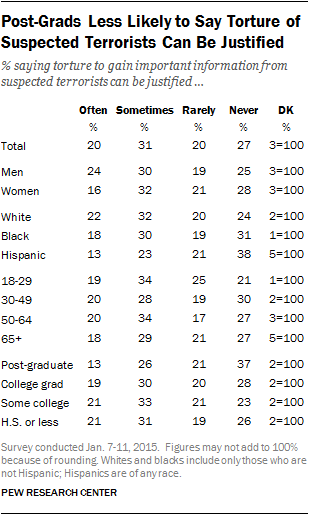 In both parties, there is an ideological divide in terms of these attitudes. While 35% of conservative Republicans say torture to gain information from suspected terrorists can often be justified, just 21% of moderate and liberal Republicans agree. And about half (51%) of liberal Democrats say the use of torture can never be justified, compared with 32% of moderates and conservatives in the party. 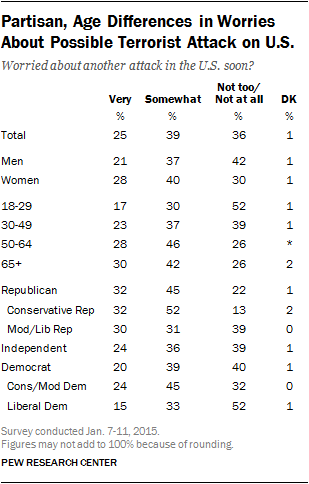 Opinions about the use of torture also vary based on education levels. Those with at least a graduate degree are the most likely to say torture can never be justified to gain information from suspected terrorists (37%) — about 10 points more likely than those of all other education levels.

Men are somewhat more likely than women to say torture in these circumstances can often be justified (24% vs. 16%), though they are about as likely to say it can never be justified (25% vs. 28%).

There also are partisan differences in concerns over terrorism. Among Republicans, about one-third (32%) say they are very worried that there will soon be another attack on the U.S.; 45% are somewhat worried, while just 22% are not too worried or worried at all. By comparison, 20% of Democrats are very worried, about four-in-ten (39%) are somewhat worried, and 40% are not too or not at all worried.

Conservative Republicans are about twice as likely as liberal Democrats to say they are very worried about an attack on the U.S. soon (32% vs. 15%).

Older adults are more likely than young people to express concern about an attack in the near future: 30% of those 65 an older say they are very worried about this, compared with 17% of those under 30. 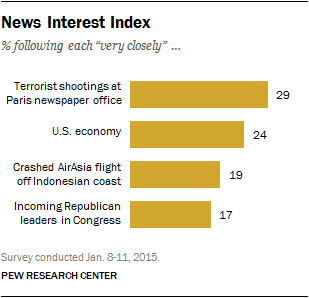 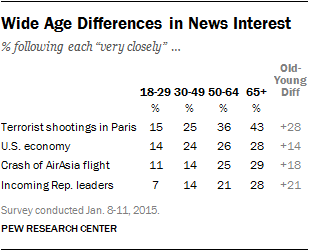 While younger Americans typically pay less attention to news events than older Americans, the gap on the terrorist shootings in Paris is particularly large: 43% of those ages 65 and older followed this news very closely, while just 15% of those ages 18-29 say they did the same.