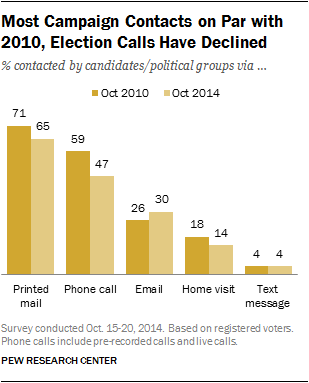 Voters are reporting roughly similar levels of contact from political campaigns and groups as four years ago, with one notable exception. The share of voters who say they have received a phone call about the election has fallen 12 points since mid-October 2010, from 59% to 47%.

The new national survey by the Pew Research Center, conducted Oct. 15-20 among 2,003 adults, including 1,494 registered voters, finds that other forms of campaign outreach appear to be close to levels measured in 2010. Nearly two-thirds of voters (65%) say they have gotten printed mail from candidates or political groups, down from 71% in mid-October 2010; 30% have gotten an email, compared with 26% then. Slightly fewer voters say they have been visited at home by someone than did so four years ago (14% now, 18% then). And the share of voters receiving text messages from candidates or political groups has remained flat (at 4%) since 2010. 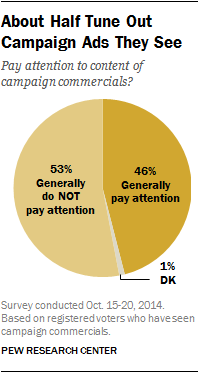 Voters report seeing or hearing fewer campaign commercials than at this point in the prior midterm. Still, 80% have seen or heard campaign commercials for this year’s candidates, including 44% who have encountered “a lot” of ads. This is lower than 2010 (88% total, 56% a lot), but similar to early October .

Meanwhile, voter participation in the 2014 midterm campaign – the percentages who have donated their time or money to a campaign, or attended a campaign event – also is on par with 2010. At this point, neither party has an edge in direct campaign involvement by their voters.

However, Republican registered voters are more likely than Democratic or independent voters to say they have encouraged someone they know to support a candidate, party or issue. About half of Republicans (51%) say they have done this compared with 43% of independents and just 39% of Democrats. (This question was not asked in prior midterm campaigns.)

A Pew Research Center report last week found that more GOP voters than Democratic voters have given a lot of thought to the election, followed news about the campaign very closely, and said they “definitely” will vote Nov. 4. 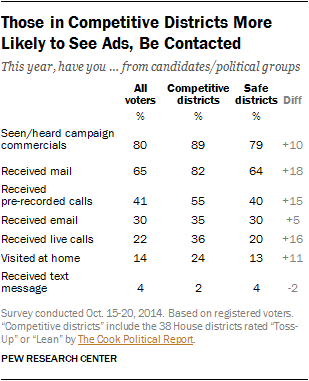 Those who live in House districts with competitive campaigns are more likely than others to see or hear campaign ads. About nine-in-ten voters (89%) who live in the 38 “competitive” districts say they have seen or heard campaign commercials, and 55% have encountered a lot of ads. In the vast majority of congressional districts viewed as “safe,” 79% have seen or heard campaign ads, with 43% saying they have encountered a lot of ads. 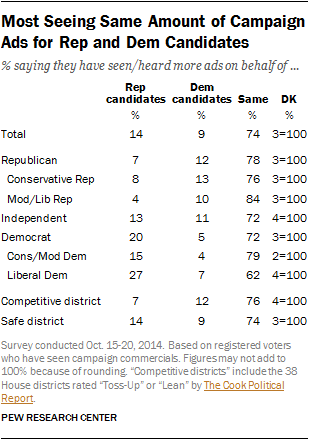 Currently, voters in competitive House districts also are more likely than those in safe districts to say they have received campaign phone calls— both live and pre-recorded calls —and home visits.

Campaign Participation: GOP Edge in Encouraging Others to Vote 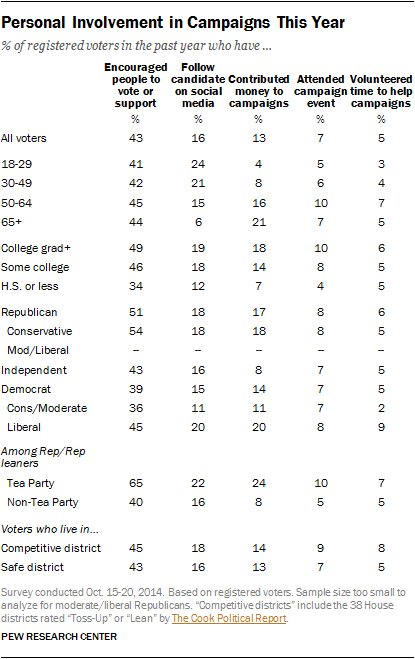 More than four-in-ten registered voters (43%) this year have encouraged someone they know to vote or support a particular candidate, party or issue. Republican voters are more likely than Democrats to have done so (51% vs. 39%).

Among Republicans and Republican-leaning registered voters who agree with the Tea Party, fully 65% have encouraged others to vote, or to vote in a particular way; that compares with just 40% of non-Tea Party Republicans.

On other campaign activities, there are little partisan differences. Republican and Democratic voters are about equally likely to say they follow candidates on social media, to donate to campaigns or candidates, attend campaign events, or volunteer for campaigns.

Younger voters are less likely than older voters to say they have been contacted by campaigns. The differences are especially large in traditional mail and phone calls. Only about a third of voters younger than 30 (35%) say they have received printed mail from candidates or political groups. Majorities of older voters – including 78% of those 65 and older – report receiving campaign mailings. 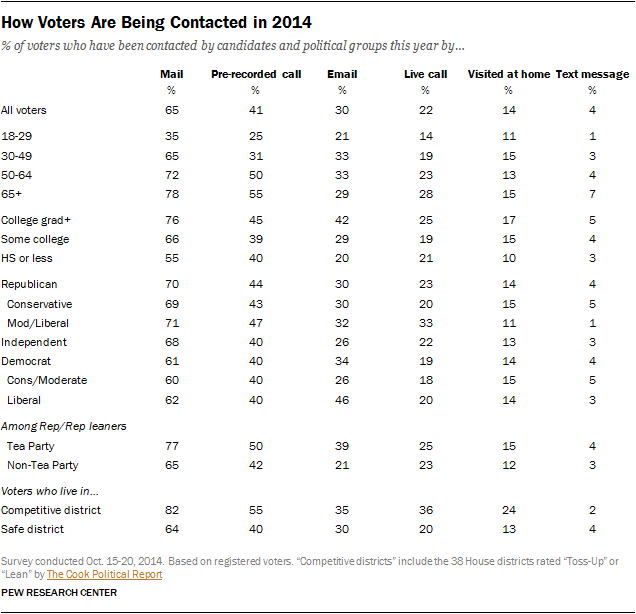 Younger people, who use cell phones at much higher rates than older adults, are far less likely to report receiving campaign calls, especially robo-calls. Just 25% of voters under 30 and 31% of those 30-49 say they have gotten pre-recorded campaign calls. That compares with 50% of voters 50-64 and 55% of those 65 and older. The differences are smaller in live campaign calls; still, voters 65 and older are twice as likely as those under 30 to say they have gotten a live call about the election (28% vs. 14%).

The age differences in campaign contacts even extend to emails and text messages. About-one-in-five voters under 30 (21%) have gotten an email about the campaign – the lowest of any age group – and just 1% say they have gotten a text message.

The share of registered voters who have received robo-calls in this election has dropped from 2010, with the biggest change coming from those reached on cell phones. Most adults today have both a cell phone and a landline phone in their household. Currently, the Pew Research Center interviews 60% of respondents on cell phones and 40% on landlines; in 2010, only 34% were interviewed on cells and 66% on landlines. 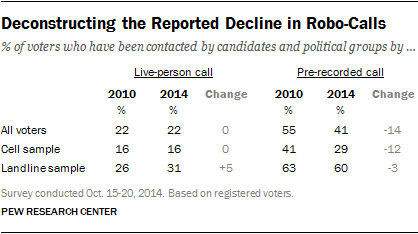 By comparison, there has been no change in the overall share receiving calls about the campaign from a live person (22%). Among those in the cell phone sample, 16% have been contacted this way (unchanged from 2010), while 31% in the landline sample have received live calls (also largely unchanged from 26% in 2010).