The analysis in this report is based on telephone interviews conducted October 15-20, 2014 among a national sample of 2,003 adults, 18 years of age or older, living in all 50 U.S. states and the District of Columbia (802 respondents were interviewed on a landline telephone, and 1,201 were interviewed on a cell phone, including 677 who had no landline telephone). The survey was conducted by interviewers at Princeton Data Source under the direction of Princeton Survey Research Associates International. A combination of landline and cell phone random digit dial samples were used; both samples were provided by Survey Sampling International. Interviews were conducted in English and Spanish. Respondents in the landline sample were selected by randomly asking for the youngest adult male or female who is now at home. Interviews in the cell sample were conducted with the person who answered the phone, if that person was an adult 18 years of age or older. For detailed information about our survey methodology, see http://pewresearch.org/politics/methodology/ 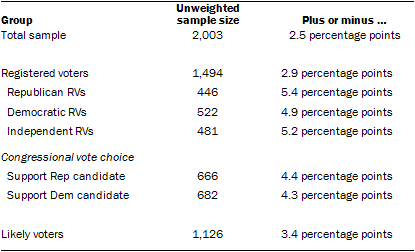 Likely Voters
Likely voter estimates are based on a 7-item turnout scale that includes the following questions: thought (thought given to the election), precinct (ever voted in your precinct or election district), Q.3 (follow government and public affairs), oftvote (how often vote), plan1 (likelihood of voting), pvote12a (voted in the 2012 presidential election) and scale10 (chances of voting on 1-10 scale). More details about the Pew Research Center’s methodology for estimating likelihood to vote are available at https://www.pewresearch.org/politics/methodology/election-polling/identifying-likely-voters/

As Midterms Near, GOP Leads on Key Issues, Democrats Have a More Positive Image
About the Survey