The prisoner exchange that freed U.S. soldier Bowe Bergdahl from the Taliban in Afghanistan gets a more negative than positive reaction from the public. 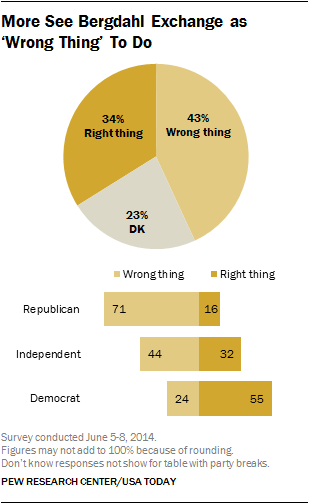 Overall, 43% say it was the wrong thing for the Obama administration to exchange five Taliban prisoners for captive soldier Bergdahl, while fewer (34%) say it was the right thing to do; 23% do not offer an opinion.

The new national survey by the Pew Research Center and USA TODAY, conducted June 5-8 among 1,004 adults, finds that while this specific prisoner exchange is viewed negatively on balance, most think the U.S. has a responsibility to do all it can to free captive U.S. soldiers in general, regardless of the circumstances of their capture.

Overall, 56% say the U.S. has a responsibility to do all it can to return an American captive soldier, no matter what the circumstances; 29% say that because Bergdahl left his post, the U.S. was not obligated to do all it could to secure his release.

Reactions to the Bergdahl case are deeply divided along partisan lines. Fully 71% of Republicans think the prisoner exchange was the wrong thing to do, while just 16% say it was the right thing to do. Democrats, by more than two-to-one (55% to 24%), have a positive opinion of the agreement. 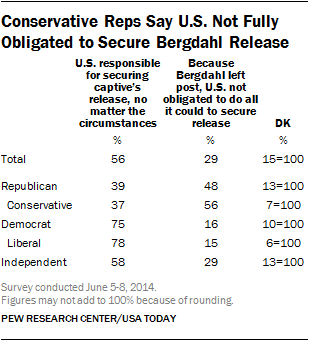 Republicans, particularly conservative Republicans, also are far less likely than Democrats to say that the U.S. was obligated to do all it could to secure Bergdahl’s freedom.

A majority of Democrats (75%) says the U.S. has a responsibility to return captive soldiers, no matter what the circumstances.

In general, there is more public support for the U.S. taking all measures to secure the release for captured U.S. soldiers, regardless of the circumstances, than there is for the Bergdahl prisoner exchange. In part, this reflects the fact that some who support making every effort to free a captive U.S. soldier in general have doubts about the specifics of the Bergdahl deal. Among those who say the U.S. has a responsibility to do all it can to return an American captive soldier, roughly a quarter (27%) say the Bergdahl exchange itself was the wrong thing to do.

Little Anger – or Sympathy – toward Bergdahl 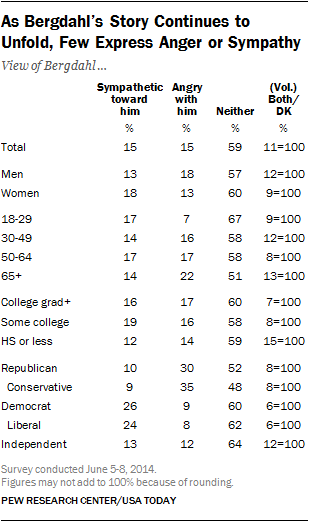 The cancelation of the homecoming parade for Bowe Bergdahl in Hailey, Idaho highlights the polarized reactions to the solider, with some calling him a deserter and others a hero. At this point, public views of Bergdahl are relatively muted: 15% say they are sympathetic toward him while an equal share (15%) say they are angry with him; nearly six-in-ten (59%) say they feel neither of these reactions toward him.

Anger with Bergdahl is highest on the right: 30% of Republicans, and 35% of conservative Republicans, say they feel angry with Bowe Bergdahl. By contrast, Democrats are more likely to say they are sympathetic (26%) than angry (9%) with him.

Most Say President Needs to Inform Congress on Decisions Like These

President Obama has received criticism for failing to notify Congress 30 days in advance of the transfer of five Guantanamo Bay prisoners in exchange for Bowe Bergdahl. When asked to think generally about situations like the Bergdahl 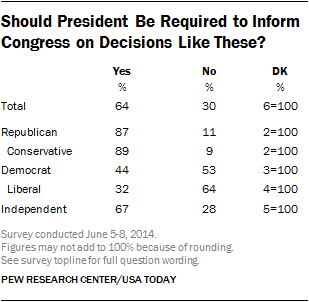 This view is nearly unanimous among Republicans (87%-11%), and 67% of independents also say the president should be required to inform Congress in advance of decisions like these. Democrats are more divided, with a narrow 53%-majority saying the president should have the flexibility to act without informing Congress in advance, while 44% say he should be required to notify Congress.

Households that include a military veteran take a more negative view of Bergdahl and the prisoner exchange than do households without a veteran. 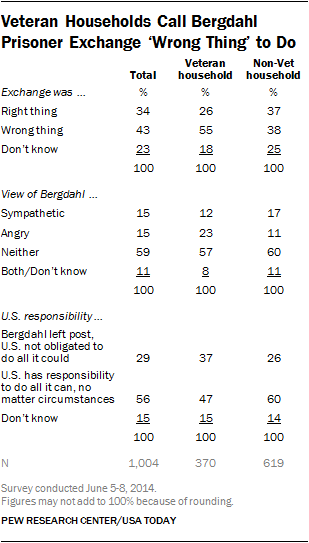 Overall, 33% of the public says someone in their household has served in the U.S. military or the military reserves at some point. Among this group, 55% say the exchange of five Taliban prisoners was the wrong thing to do, compared with just 26% who say it was the right thing to do. Non-veteran households are evenly divided (37% right thing, 38% wrong thing).

Furthermore, veteran households are somewhat more likely to say they are angry with Bergdahl (23%) than sympathetic toward him (12%), though most (57%) say they hold neither feeling toward him.

And when it comes to U.S. responsibility toward Bergdahl, 37% of veteran households say the country was not obligated to do all it could to secure his release because he walked away from his post; 47% say the U.S. has a responsibility to do all it can to return an American captive soldier, no matter what the circumstances. Non-veteran households are more likely to back U.S. efforts to free captive soldiers, regardless of the circumstances (60%-26%). 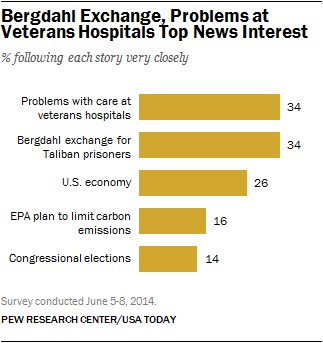 The Obama administration’s decision to exchange five Taliban prisoners for U.S. solider Bowe Bergdahl tied with reports about problems with care at veterans hospitals around the country as the public’s top story last week. Overall, 34% say they very closely followed each news story.

Republicans (51%) were much more likely than Democrats (31%) to say they followed news about the prisoner exchange very closely.

Relatively few say they followed news about a plan by the Environmental Protection Agency to limit carbon emissions from power plants (16%) or news about the 2014 Congressional elections (14%). Similarly small percentages of Republicans (18%) and Democrats (17%) followed midterm election news very closely.