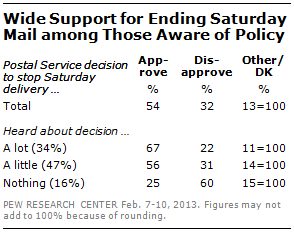 A majority of Americans (54%) approve of the U.S. Postal Service’s recent decision to halt Saturday delivery of letters, while 32% disapprove of the decision. The planned end of Saturday mail delivery is a rare government decision that garners bipartisan support – 58% of independents approve of the action, as do 57% of Republicans and 51% of Democrats.

Most Americans say they have heard or read at least a little about the Postal Service’s announcement that they plan to stop Saturday delivery of letters to address budget shortfalls. Majorities of those who have heard a lot (67%) or a little (56%) about the action approve of it.

But those who have heard nothing at all about the decision – 16% of the public – disapprove of stopping Saturday mail delivery by more than two-to-one (60% disapprove vs. 25% approve). 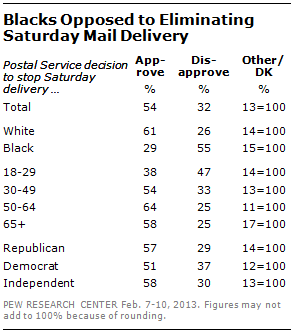 The national survey by the Pew Research Center, conducted Feb. 7-10 among 1,004 adults, finds that blacks are the only major demographic group in which a majority (55%) opposes the Postal Service decision to halt Saturday delivery. Whites approve of the decision by more than two-to-one (61% to 26%).

Fewer blacks than whites have heard about the Postal Service’s announcement that it is stopping Saturday deliveries because of budget problems. Nearly three-in-ten blacks (29%) say they heard nothing at all about the announcement, compared with 12% of whites.

People younger than 30 are far less aware of the Postal Service announcement than older people – 42% of those 18-to-29 heard nothing at all about it, compared with just 10% of those 30 and older. Those under 30 also are the only age group in which a majority does not support the decision (38% approve). 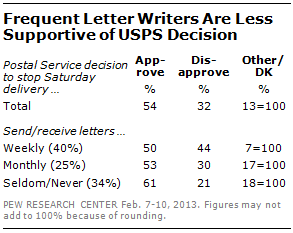 Those who use the mail infrequently, or don’t use it at all, are more supportive of the decision to end Saturday delivery than are those who send or receive letters on a weekly basis.

Most Approve of Ending Saturday Mail Delivery
Overview
About the Survey