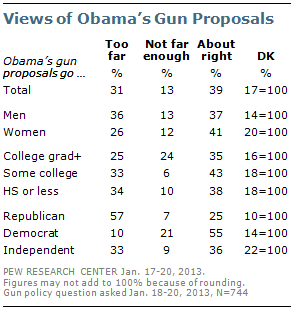 With the public paying close attention to the national debate over gun control, Barack Obama’s gun proposals receive a mixed rating from the public. A 39% plurality say Obama’s proposals are about right while another 13% say they do not go far enough. About three-in-ten (31%) say the president’s proposals go too far; 17% do not offer an opinion.

The latest national survey by the Pew Research Center for the People & the Press, conducted Jan. 17-20 among 1,006 adults, finds that the public is closely tracking the gun debate: 43% followed news about Obama’s proposals very closely and an additional 29% followed the news fairly closely. 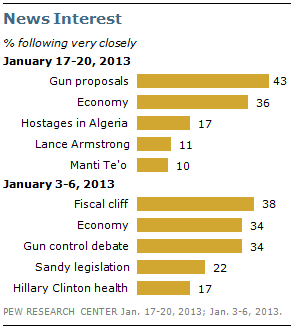 In the first week of January, the resolution to the fiscal cliff topped the public’s news agenda with 38% saying they followed that story very closely. Economic news (34% very closely) and the debate over gun control (34% very closely) also received significant public attention in the Jan. 3-6 survey.