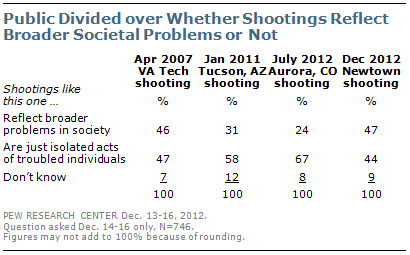 The survey by the Pew Research Center for the People & the Press, conducted Dec. 14-16 among 746 adults, finds the public is evenly divided over whether the Newtown shootings reflect broader problems in Americans society (47%) or are just the acts of troubled individuals (44%).

By contrast, clear majorities said that both the Aurora shootings, as well as the shootings in Tucson, Ariz. in Jan. 2011, were just the isolated acts of troubled individuals; 67% said that after the Aurora shootings at a movie theater and 58% said that after the Tucson shootings, which killed six and left former Rep. Gabrielle Giffords seriously wounded. Opinions today are comparable to reactions to the shootings on the campus of Virginia Tech University in April 2007.

Most parents are talking with their children about the massacre at Sandy Hook Elementary School, according to a separate survey of more than 750 adults with children at home, conducted Dec. 14-17, using Google Consumer Surveys. About half (53%) of all the parents who participated in the survey, including 71% of those with younger children, say they are restricting how much news coverage of the tragedy their children watch. 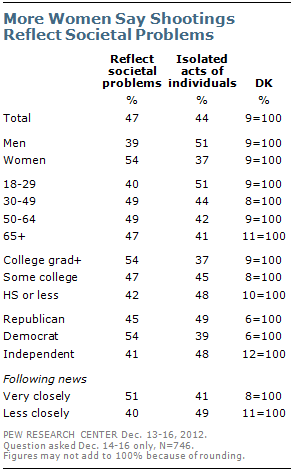 Women, by 54% to 37%, say that Friday’s shootings at the elementary school reflect broader problems in American society. Men express the opposite view: 51% say that shootings like this are just the isolated acts of troubled individuals.

College graduates (54%) are more likely than those with no more than a high school education (42%) to say that the massacre reflects broader societal problems.

There also are partisan differences in reactions to the tragedy: Democrats, by 54% to 39%, say the shootings reflect broader societal problems. Republicans are divided, with 49% saying such incidents are the acts of troubled individuals, while 45% say they reflect broader problems.

People who have followed news about the shootings very closely are more likely than those who have not to say that they represent broader problems in society (51% vs. 40%).

How Parents Are Coping 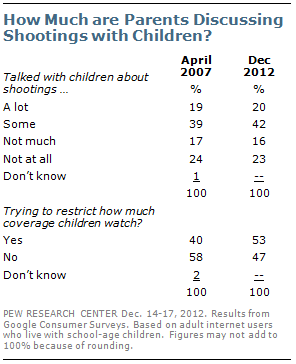 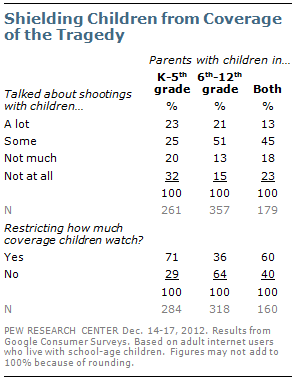 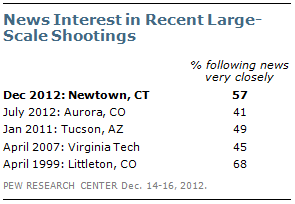 Public Divided over What Newtown Signifies
OverviewIsolated Acts or Indicative of Broader Problems?How Parents Are CopingHigh News Interest in Newtown Shootings
About the Surveys