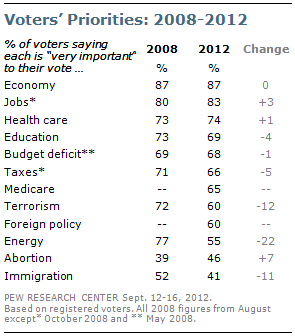 However, the latest national survey by the Pew Research Center for the People & the Press, conducted Sept. 12-16 among 3,019 adults, including 2,424 registered voters, finds that several other issues have declined in importance since 2008. Most notably, energy policy rated among the most important electoral issues in 2008 – 77% said it was very important to their vote. Today it ranks near the bottom of the voting priorities list at 55%.

Terrorism also has declined as a voting priority. Currently, 60% of voters say the issue of terrorism will be very important to their vote, down from 72% in August 2008. 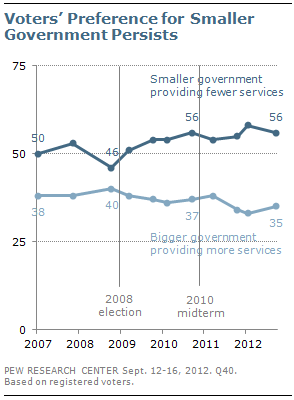 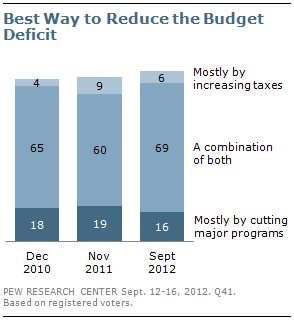 There are substantial differences between the priorities of voters who support Romney and those who back Obama. Eight-in-ten Romney voters (82%) say the budget deficit will be very important to their vote, compared with 55% of Obama supporters. 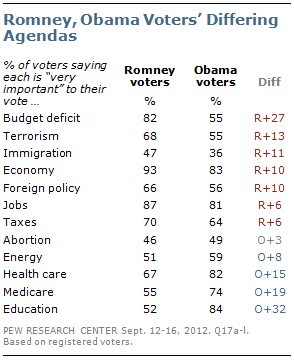 That is a reversal from four years ago; in May 2008, more Obama voters (77%) than supporters of John McCain (60%) said the budget deficit was very important to their vote.

The Pew Research Center’s annual public priorities surveys have found that the party out of power tends to place greater importance on the budget deficit than does the party that controls the White House. In January 2012, 84% of Republicans and 66% of Democrats viewed reducing the budget deficit as a top priority. Four years earlier, at the start of George W. Bush’s final year in office, more Democrats (64%) than Republicans (52%) said the reducing deficit was a top priority.

Education, Medicare and health care rate as far more important priorities for Obama voters than for Romney voters. More than eight-in-ten Obama supporters (84%) say education will be very important to their vote, compared with 52% of Romney supporters, and there also are sizable gaps over Medicare (19 points) and health care (15 points).

Roughly one-in-five voters (22%) are considered swing voters, either because they are undecided or haven’t fully committed to Obama or Romney. For the most part their priorities are in line with those of all registered voters: Fully 85% of swing voters view the economy as a very important voting issue, followed by education and jobs (74%). 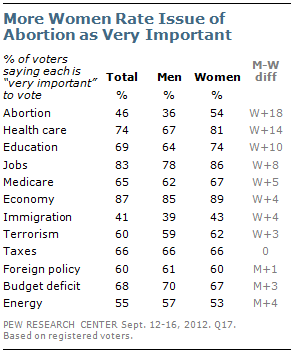 While women view abortion as a more important issue than do men, there is no indication in the survey that is having an impact on the vote choices of women. In the new survey, women favor Obama over Romney by a wide margin (56% to 37%). Obama’s advantage is about as wide among women who view abortion as very important (58% to 37%) as among those who view it as less important (53% to 36%). 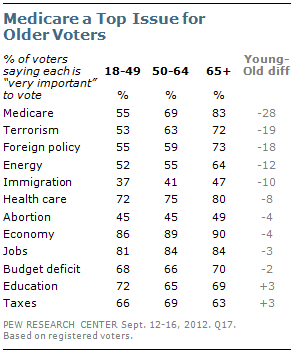 Medicare rates as a much more important issue for older voters than younger voters. More than eight-in-ten (83%) voters 65 and older view the issue as very important to their vote, as do 69% of those 50 to 64. Among voters younger than 50, just 55% rate Medicare as a very important issue. 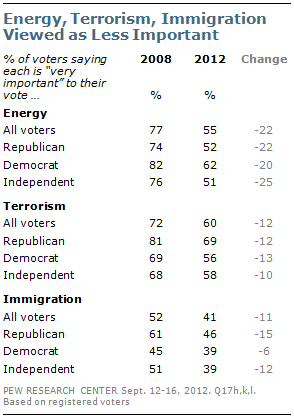 Energy emerged as a major issue during the 2008 campaign. In August, as gas prices surged, 77% of voters said the issue of energy would be very important to their vote. Currently, just 55% view energy as very important.

Just 52% of Republican voters now say energy is very important, down from 74% four years ago when the phrase “drill baby drill” became a political slogan at the 2008 GOP convention. The declines have been comparable among independents (25 points) and Democrats (20 points). 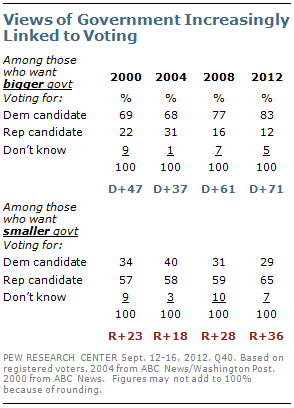 Views about the size of government have long been linked with voting preferences. But these opinions are now more correlated with the vote than in previous election cycles going back to 1976.

The Pew Research Center’s long-term study of political values, released June 4, found that the largest divides between Obama supporters and Romney supporters were over the scope and role of government in the economic realm, and that the partisan divides over these and other values continue to grow.

For Voters It’s Still the Economy
OverviewPriorities of Romney, Obama, Swing VotersGender, Age Differences in PrioritiesEnergy Falls in ImportanceViews of Government More Linked to Voting Preferences
About the Survey