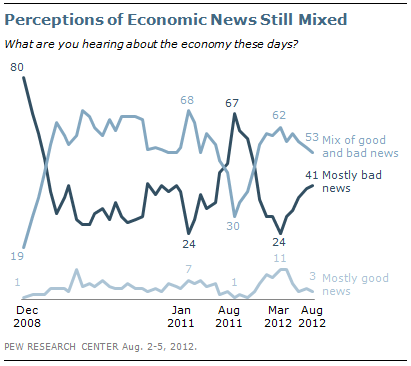 The latest national survey by the Pew Research Center for the People & the Press, conducted August 2-5, 2012 among 1,005 adults, finds that perceptions of economic news are relatively unchanged from July. However, this represents a rise in the proportion hearing mostly bad news about the economy from earlier in the year, when the unemployment rate dipped.

months. Today, a 54% majority reports hearing mostly bad news about consumer prices, up from 45% in July.

And public perceptions about news of the housing market have been steady over the course of 2012. Currently, 41% say news about real estate values is mostly bad, nearly identical to the percentage saying this in both March and July (39%). 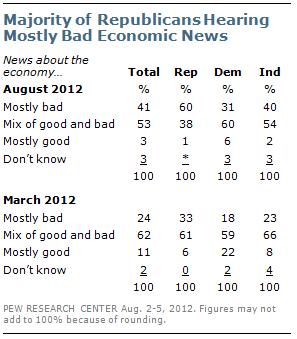 In March, majorities of Republicans, Democrats, and independents reported hearing a mix of good and bad economic news. Over the last five months, the percentage of Republicans who report that economic news is current mostly negative has grown 27-points (from 33% to 60%); by comparison, the increase in those who say the news is mostly negative among Democrats (13-points) and independents (17-points) is less pronounced.