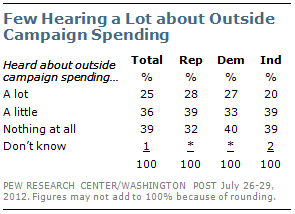 The public is hearing little about increased spending by outside groups in the 2012 election. Just 25% have heard a lot about outside spending by groups not associated with the candidates or campaigns, while three-quarters are hearing a little (36%) or nothing at all (39%) about this. In fact, the term “super PAC” itself is not widely known: Just 40% can correctly identify the term, nearly half (46%) don’t know what it refers to, while 14% give incorrect responses. 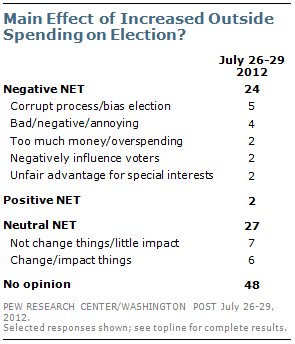 When asked an open-ended question about the effect of increased outside spending on the election, a plurality (48%) expresses no opinion. About equal percentages indicate the effect will be neutral (27%) or negative (24%). Just 2% give a positive response about the effect of more outside political spending. 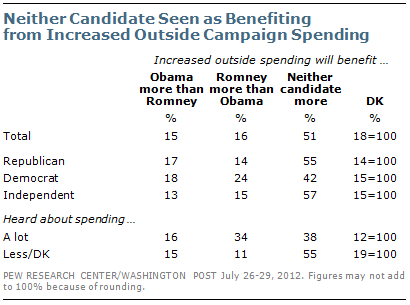 The latest national survey by the Pew Research Center for the People & the Press and The Washington Post, conducted July 26-29, 2012 among 1,010 adults, finds that few people thing either Barack Obama or Mitt Romney is gaining an advantage as a result of increased election spending by outside groups. About half (51%) say neither candidate will benefit more than the other, 16% say Romney will benefit more than Obama, while about as many (15%) say Obama will benefit more than Romney.

There are only modest partisan differences in views of whether Obama or Romney will benefit more from increased spending by outside groups. A majority of Republicans (55%) and a plurality of Democrats (42%) say neither candidate will benefit more than the other. 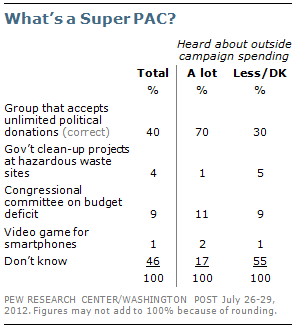 Reflecting the public’s low level of awareness about campaign finance and this year’s election, just 40% can correctly identify a “super PAC” as a group that is able to accept unlimited political donations. Nearly half (46%) don’t know what the term refers to, while 14% give incorrect responses.