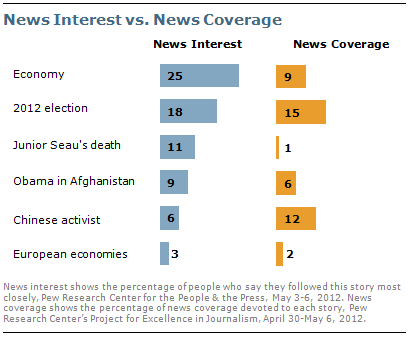 Americans followed news about the nation’s economy more closely than any other news last week amid new signs the pace of the recovery has slowed.

A quarter of the public (25%) says their top story was reports about the condition of the U.S. economy, while 18% say they followed news about the 2012 presidential election most closely, according to the latest weekly News Interest Index survey, conducted May 3-6 among 999 adults by the Pew Research Center for the People & the Press.

In a week when no single story dominated coverage, the presidential campaign accounted for 15% of the newshole, according to a separate analysis by the Pew Research Center’s Project for Excellence in Journalism (PEJ). The drama unfolding in China over the fate of dissident Chen Guangcheng ranked second, accounting for 12%. News about the economy made up 9%. Despite heavy coverage of the China story, which has involved tense negotiations between the U.S. and China, public interest has been modest; 15% say they followed this story very closely, while 6% say this was the news they followed most closely.

And while the U.S. economy is the public’s top story, relatively few are following reports about economic problems in several European countries. Just 16% report tracking economic news from Europe very closely, and only 3% say news from Europe was what they followed most closely.

The Tone of Economic News 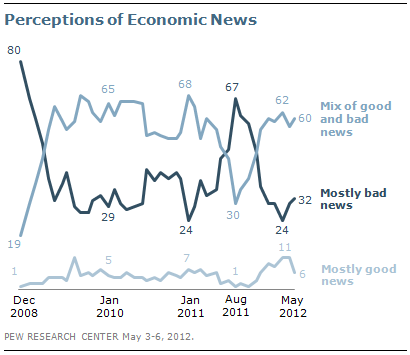 At that point, 24% said they were hearing mostly bad news about the economy. That rose to 30% in early April and now stands at 32%. The relatively small number hearing mostly good news has dropped from 11% in April and March to 6% in the current survey.

On May 4, the federal labor department released a worse-than-expected report on the national jobs situation. The government also reported at the end of April that the pace of economic growth slowed in the first quarter of the year.

Partisans continue to differ sharply in their perceptions of the tone of economic news. Republicans and independents are much more likely than Democrats to say they are hearing mostly bad news about the economy. More than four-in-ten Republicans (44%) and 36% of independents say this, compared with 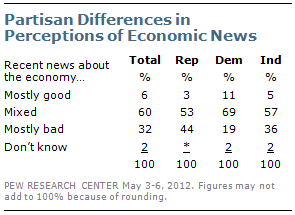 More Democrats now say they are hearing mixed news about the economy (69%) than did so in April (59%). Opinions among Republicans and independents are little changed from one month ago.

The health of the economy and the 2012 presidential election are both long running stories that routinely attract public interest. 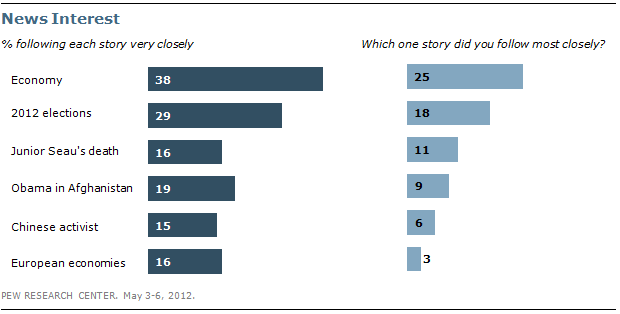 About three-in-ten (29%) say they followed election news very closely last week, a level of interest that has held relatively steady for much of 2012. 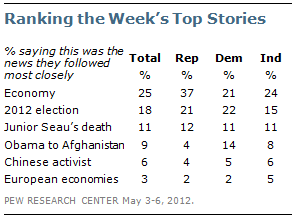 Overall, 9% say the president’s trip to Afghanistan was their top story; 19% say they followed this news very closely. Coverage of Afghanistan last week, focused primarily on Obama’s visit and U.S. policy there, accounted for 6% of coverage.

About one-in-ten (11%) say they followed news about the death of former NFL linebacker Junior Seau most closely; 16% say they followed this news very closely. Men are more likely than women to say this was their top story (14% vs. 8%).

Just 6% say their top story was the controversy over how U.S. and Chinese officials dealt with the crisis over the fate of Chen Guangcheng, the Chinese human rights activist who had sought refuge in the U.S. embassy in Beijing. Fewer than two-in-ten (15%) followed this news very closely. More than a third (36%) say they did not follow this story at all closely, though it accounted for almost as much coverage as the presidential campaign.

These findings are based on the most recent installment of the weekly News Interest Index, an ongoing project of the Pew Research Center for the People & the Press. The index, building on the Center’s longstanding research into public attentiveness to major news stories, examines news interest as it relates to the news media’s coverage. The weekly survey is conducted in conjunction with The Project for Excellence in Journalism’s News Coverage Index, which monitors the news reported by major newspaper, television, radio and online news outlets on an ongoing basis. In the most recent week, data relating to news coverage were collected April 30-May 6, and survey data measuring public interest in the top news stories of the week were collected May 3-6, 2012, from a nationally representative sample of 999 adults.