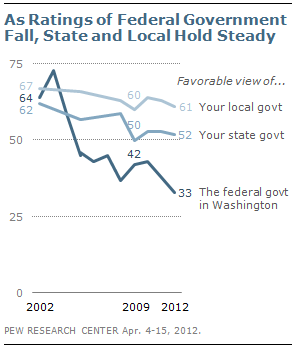 Ten years ago, roughly two-thirds of Americans offered favorable assessments of all three levels of government: federal, state and local. But in the latest survey by the Pew Research Center for the People and the Press, conducted April 4-15, 2012 among 1,514 adults nationwide, the favorable rating for the federal government has fallen to just 33%; nearly twice as many (62%) have an unfavorable view.

Although favorability ratings for state governments declined between 2008 and 2009 as the financial crisis hit, they have remained steady over the past four years. Consequently, the gap between ratings of state governments and the federal government has grown.

Falling Ratings for the Federal Government

The overall decline in favorability toward the federal government in Washington is consistent with other views of government. Recent Pew Research Center studies have shown overall public trust in government at or near all-time lows (See these reports from 2011 and 2010.). And a survey conducted in January 2012 found ratings of Congress have also reached historic lows.

Since Barack Obama’s first year in office, public assessments of the federal government have dropped nine-points, with most of the change among Democrats and independents. In 2009, 61% of Democrats and 35% of independents had favorable opinions of the federal government in Washington, those figures stand at 51% and 27%, respectively, today. Republicans’ views, already low in 2009, have shown less change. 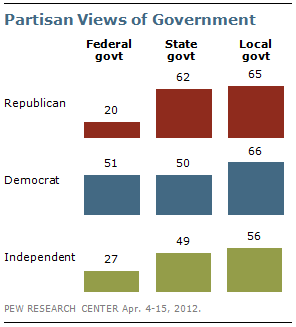 While Republicans offer an overwhelmingly negative assessment of the federal government in Washington, they take a far more positive view of state governments than do either Democrats or independents.

Among Republicans, more have a favorable than unfavorable view of their state government, by a 62% to 34% margin. Democrats (50% favorable, 45% unfavorable) and independents (49%, 44%) are divided. 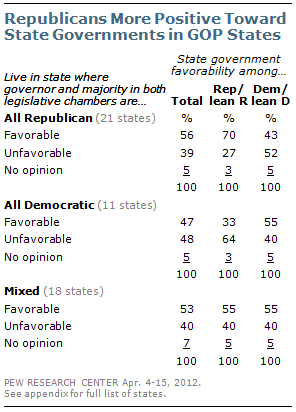 helm. Fully 70% of Republicans and Republican leaners in these states give their state government a favorable rating. Republicans states are those that have Republican governors and Republican majorities in both state legislative chambers; among the largest are Florida, Georgia, Ohio, Pennsylvania and Texas (see appendix at the end of this report for a full list of states).

By contrast, in the 11 states with unified Democratic control (the largest being California, Illinois, Washington and Massachusetts), just 33% of Republicans and Republican leaners offer a favorable rating.

State governments receive more positive ratings than the federal government across a range of performance-related traits. In a separate survey, conducted April 19-22 among 1,004 adults, more people describe their state government as mostly honest 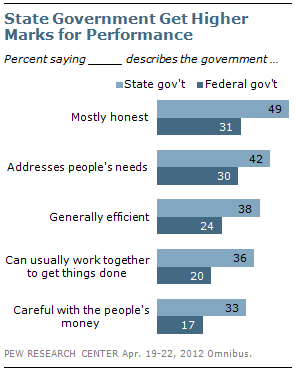