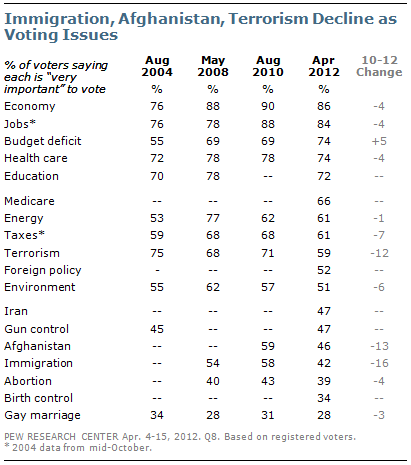 By contrast, terrorism is viewed as much less important than during those campaigns. Currently, 59% say that terrorism will be very important to their vote, down from 71% in 2010 and 68% in 2008.

As in recent campaigns, social issues rank relatively low in importance. About four-in-ten (39%) say that abortion will be very important to their vote, 34% rate birth control as very important, and just 28% say the same about gay marriage – the lowest percentage for any issue.

Overwhelming percentages of Republicans, Democrats and independents rate the economy and jobs as very important voting issues. However, there are substantial partisan differences over the importance of other issues – including the environment, the 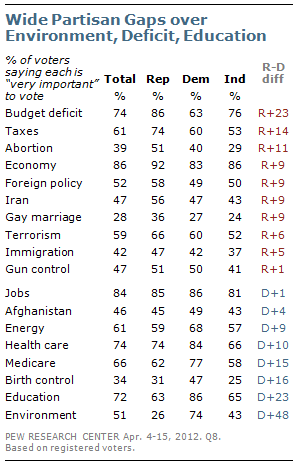 The partisan differences in views of the importance of issues among voters are comparable to the gaps found among the general public in the Pew Research Center’s annual policy priorities survey, conducted in January. 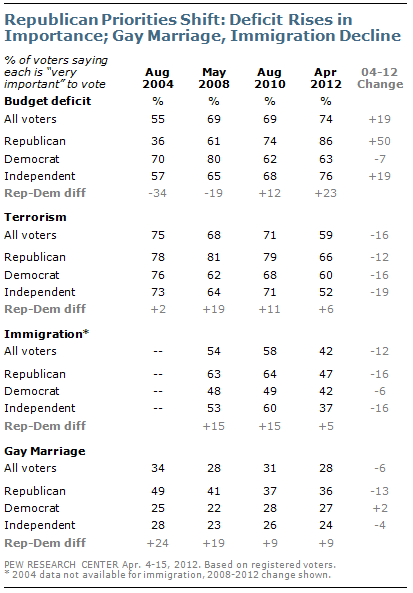 In August 2004, just 36% of Republican voters rated the budget deficit as a very important issue to their vote. Among 11 issues tested, it ranked at the bottom, along with the environment (38%).

The percentage of GOP voters saying the deficit is very important increased 25 points between August 2004 and May 2008 – and has risen another 25 points since then (to 86%). In the current survey, only the economy ranks higher among Republican voters (92% very important). 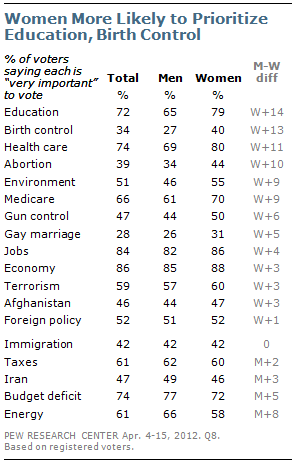 There are several issues, including education, birth control, health care and abortion, that rate as more important for women than men. Nearly eight-in-ten women (79%) say that education will be very important to their vote this fall, compared with 65% of men.

Birth control ranks relatively low in importance among both female and male voters. Still, more women than men say birth control will be very important to their vote (40% vs. 27%). Among voters younger than 50, nearly twice as many women (46%) as men (25%) rate this as very important.

Energy is the only issue that more men than women voters view as very important (66% vs. 58%). On most issues, including the economy, jobs, foreign policy and terrorism, there are no significant gender differences.