As the general election campaign gets underway, Obama’s slim 49% to 45% edge over Mitt Romney is based on his continued support among women, college graduates, blacks, Latinos and lower-income voters. Obama leads Romney by 13 points among women, which is identical to his victory margin over McCain among women four years ago, according to National Election Pool exit polls. Men, who split their vote between Obama (49%) and McCain (48%), are leaning slightly toward Romney today, by a 50% to 44% margin.

Fully 95% of blacks back Obama for reelection – identical to the black vote for Obama in 2008. Hispanic registered voters back Obama by a 67% to 27% margin. The Hispanic vote was 67% Obama, 31% McCain four years ago. These figures also are consistent with a Pew Hispanic Center survey of 557 Latino registered voters in December, in which 68% backed Obama and 23% Romney despite widespread dissatisfaction with Obama’s immigration policies. (For more see “As Deportations Rise to Record Levels, Most Latinos Oppose Obama’s Policy,” Dec. 28, 2011.)

Obama has lost support among several groups: Obama carried the independent vote by a margin of 52% to 44% in 2008. Today, 42% of independents favor him, while 48% back Romney. Obama also is faring worse among lower-income voters and those with less education than he did in 2008.

Obama trails Romney by a wide margin among white voters (54% Romney, 39% Obama), though that is little changed from 2008. But Obama has lost ground among certain groups of white voters. In 2008, whites with household incomes under $50,000 favored McCain over Obama by a slim 51% to 47% margin. Today, lower-income whites favor Romney over Obama by a 16-point margin (54% to 38%).

By contrast, Obama is running about the same as he did in 2008 among whites with higher incomes and college degrees. He trails Romney by 12 points among whites with family incomes of $50,000 or more and runs about even among white college graduates.

Obama’s lead over Romney has narrowed since last month, when he had a 12-point advantage, though it is comparable to margins from earlier this year. While Obama’s advantage has declined since March, there is little to suggest a specific problem or campaign event as having a critical effect.

While there have been debates over issues related to gender, the rise and fall in Obama’s support has largely crossed gender lines, with a fairly consistent gender gap over time. For example, since March, Obama’s support among both men and women has slipped five percentage points.

Independent voters remain up for grabs. In the current survey, 48% favor Romney while 42% back Obama. A month ago, it was 47% Obama, 44% Romney.

With more than six months to go until the election, many independents have yet to commit to either Obama or Romney. While 90% of independents express a preference, only 66% say they are certain about how they will vote. 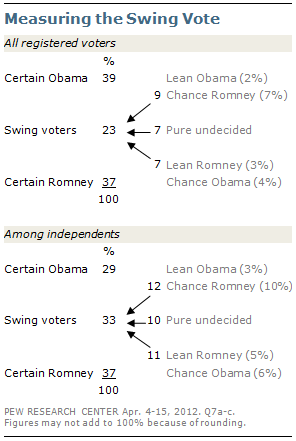 This is not uncommon when an incumbent is up for reelection and voters feel they have a clearer sense of the options before them. In June 2004, just 21% of registered voters were swing voters, including only 28% of independents.

Currently, 46% approve of the way Obama is handling his job as president while about as many (45%) disapprove. In March, 50% approved of Obama’s job performance; 41% disapproved. In February, 47% approved and 43% disapproved. 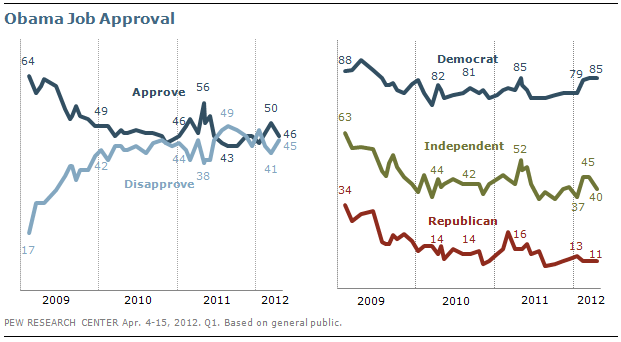 Next: Section 2: Issues of the 2012 Campaign
← Prev Page
Page1You are reading page2Page3Page4
Next Page →