The Trayvon Martin shooting is the public’s top story for the second consecutive week. But interest in the teenager’s death is deeply divided along partisan, as well as racial, lines. These differences also are apparent in reactions to news coverage of the incident: Far more Republicans (56%) than Democrats (25%) say there has been too much coverage of Martin’s death.

A separate analysis by the Pew Research Center’s Project for Excellence in Journalism (PEJ) found that the Court’s health care hearings accounted for 19% of news coverage. Slightly less coverage (18% of the newshole) was devoted to news about Trayvon Martin.

As was the case last week, African Americans are far more likely than whites to say they are closely tracking news about the Florida teenager’s death. Fully 58% cite news about Trayvon Martin’s killing as their top story, compared with 24% of whites. Moreover, 43% of whites say the story has received too much coverage, compared with just 16% of blacks. 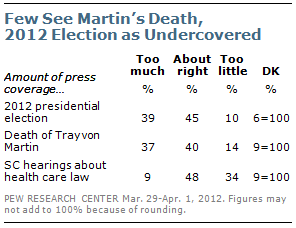 Overall, 37% of the public say that news organizations are giving too much coverage to Martin’s death; about as many (40%) say the coverage has been about right. Just 14% say the story has gotten too little coverage.

About four-in-ten (39%) say that news about the 2012 presidential candidates have gotten too much coverage; 45% say the amount of coverage has been appropriate. One-in-ten (10%) say the campaign has gotten too little coverage. These opinions have changed little since January, when 36% said there was too much campaign news coverage.

Just 9% say that the Supreme Court hearings on the health care law have received too much coverage. Nearly half (48%) say that the hearings have drawn the right amount of coverage, while 34% say that news organizations have devoted too little coverage to this story.

No story captured the public’s attention last week nearly as much as the death of Trayvon Martin, which was the most closely followed story for the second straight week (30%). That was followed by a trio of topics—Supreme Court hearings about the 2010 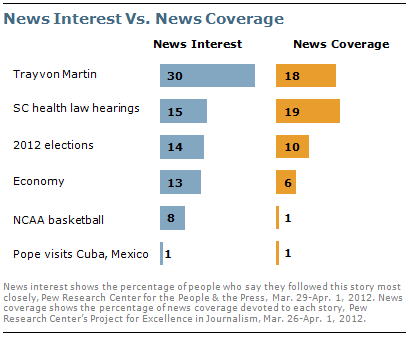 Overall, 15% of the public followed the Supreme Court hearings about the 2010 health care law most closely. About three-in-ten (29%) say they followed this story very closely.

The hearings accounted for 19% of news coverage, according to a separate analysis by PEJ. The broader debate over health care, which includes the hearings, was PEJ’s top story of last week, making up 21% of the newshole.

The public and the press paid far less attention to two other stories, the NCAA basketball tournament and Pope Benedict’s visit to Cuba and Mexico.

College basketball’s March Madness was the top story for 8% of the public, and 13% followed this very closely. Men and women differed in attentiveness to the NCAA: The tournament was the top news story for 11% of men, but just 5% of women. The basketball tournament garnered only 1% of news coverage.

The pope’s travels were the top story for 1% of the public, and 5% followed his visits to Mexico and Cuba very closely. Just 1% of the newshole was devoted to this story. 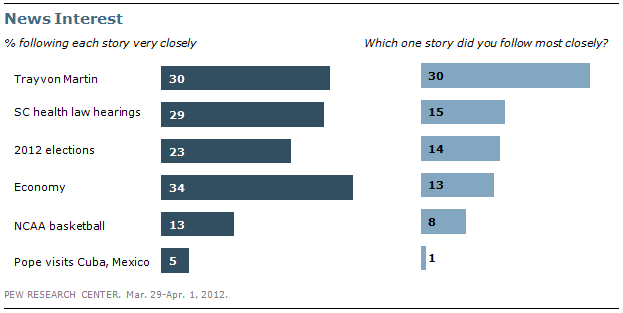 These findings are based on the most recent installment of the weekly News Interest Index, an ongoing project of the Pew Research Center for the People & the Press. The index, building on the Center’s longstanding research into public attentiveness to major news stories, examines news interest as it relates to the news media’s coverage. The weekly survey is conducted in conjunction with The Project for Excellence in Journalism’s News Coverage Index, which monitors the news reported by major newspaper, television, radio and online news outlets on an ongoing basis. In the most recent week, data relating to news coverage were collected March 26-April 1, and survey data measuring public interest in the top news stories of the week were collected March 29-April 1, 2012, from a nationally representative sample of 1,000 adults.