The public spreads the blame for the recent rise in gasoline prices. While 18% say President Obama or his administration are most to blame, about as many (14%) volunteer the oil companies or domestic oil producers. 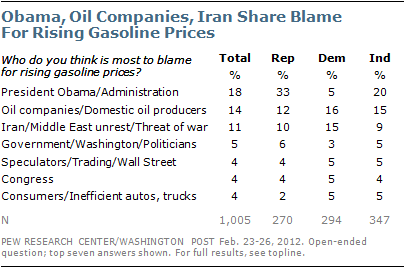 Roughly one-in-ten (11%) mostly blame Iran, the upheaval in the Middle East or the threat of war in the region, according to the latest national survey by the Pew Research Center for the People & the Press and The Washington Post, conducted Feb. 23-26 among 1,005 adults.

In May 2006, another time of sharply increasing gas prices, 31% pinned the blame on the oil companies or domestic oil producers while 25% named the Bush administration. At that point, 10% blamed OPEC – the Organization of Petroleum Exporting Countries – or foreign oil producers.