Americans generally think that colleges and universities have a positive impact on the country, and an overwhelming majority of college graduates say higher education is worth the investment. However, conservative Republicans are skeptical of colleges’ effects on the country, even though most who have completed college view the experience as personally beneficial.

In the latest survey by the Pew Research Center for the People & the Press, conducted Feb. 8-12 among 1,501 adults, 60% said that colleges have a positive effect on the way things are 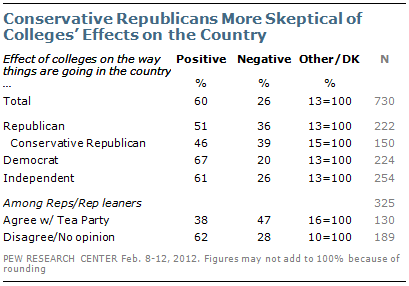 going in the country; just 26% said they have a negative effect. Of a list of 12 institutions and industries, only small businesses (75% positive effect) and technology companies (70%) were viewed more positively. 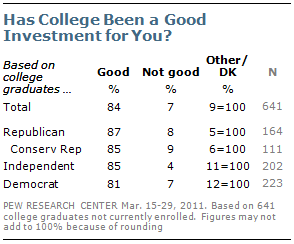 Nonetheless, conservative Republicans who have graduated from college are as likely as those in other political groups to have a positive view of the personal impact of a college education. In a survey conducted in March 2011 by Pew Social & Demographic Trends, 85% of conservative Republicans said that college had been a good investment for them personally. That was little different from the percentages of independent (85%) and Democratic (81%) college graduates who viewed college as a good investment.

That survey found relatively modest partisan and ideological differences in opinions about whether a college education is important for young people to succeed, the affordability of college, and whether the higher education system provides a good value for students and their families. (For more from this survey, see “Is College Worth It?”May 15, 2011.)

Moreover, virtually all parents across the political and ideological spectrum said they expected their own children to go to college: 99% of Republicans said this, as did 96% of Democrats and 93% of independents. 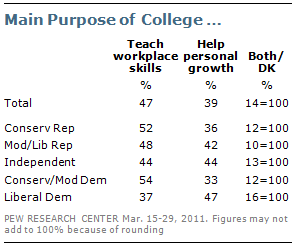 But conservative Republicans and liberal Democrats differed about the main purpose of college: 52% of conservative Republicans said the main purpose of college should be to teach specific skills and knowledge that can be used in the workplace, while 36% said its purpose should be to help an individual grow personally and intellectually.

The survey released last month found substantial partisan differences in views of the effects of several institutions, aside from colleges and universities. 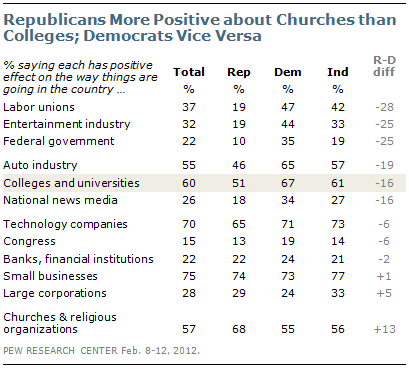 Just 19% of Republicans said labor unions have a positive effect on the way things are going in the country; more than twice as many Democrats (47%) and independents (42%) viewed unions’ impact positively.

The differences were about as large in positive opinions about the impact of the entertainment industry and the federal government (25 points each).