Americans continued to focus most closely on two interrelated news stories last week: the 2012 elections and the condition of the U.S. economy.

About a quarter of the public (24%) says news about candidates for the 2012 presidential elections was their top story. About as many (20%) say they followed news about the economy most closely, according to the latest weekly News Interest Index survey, conducted Feb. 23-26 among 1,005 adults by the Pew Research Center for the People & the Press. 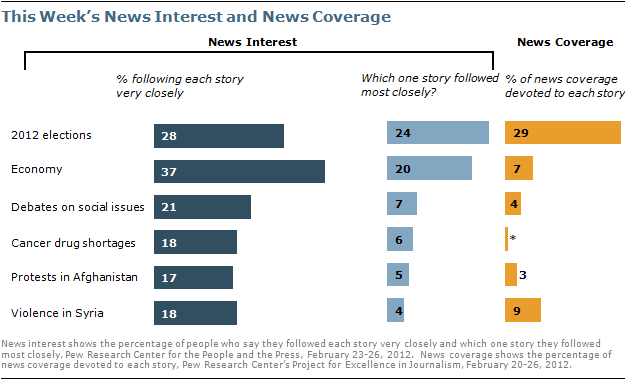 The economy dominated coverage, accounting for 29% of the newshole, according to a separate analysis by the Pew Research Center’s Project for Excellence in Journalism (PEJ). News about Syria ranked second, accounting for 9% of coverage. Few (4%) say this was the news they followed most closely.

Just 7% say they most closely followed the recent debates about social issues such as gay marriage and contraception; 21% say they followed these debates very closely. Roughly equal percentages of Republicans (21%), Democrats (24%) and independents (21%) say they followed news about these issues very closely. News about recent debates over gay marriage, contraception and abortion accounted for 4% of the newshole last week.

Another 6% say their top story was news about shortages of drugs to treat cancer and other illnesses; 18% say they followed this news very closely. This news accounted for less than 1% of coverage.

Just 5% say their top story was the violence that erupted in Afghanistan after copies of the Koran were burned at a NATO air base. Nearly two-in-ten (17%) say they followed this news very closely. News about Afghanistan made up 3% of coverage.

News about the violence in Syria continued to attract modest interest with 4% saying this was the news they followed most closely. Nearly two-in-ten (18%) say they followed news about this situation very closely.

These findings are based on the most recent installment of the weekly News Interest Index, an ongoing project of the Pew Research Center for the People & the Press. The index, building on the Center’s longstanding research into public attentiveness to major news stories, examines news interest as it relates to the news media’s coverage. The weekly survey is conducted in conjunction with The Project for Excellence in Journalism’s News Coverage Index, which monitors the news reported by major newspaper, television, radio and online news outlets on an ongoing basis. In the most recent week, data relating to news coverage were collected Feb. 20-26, and survey data measuring public interest in the top news stories of the week were collected Feb. 23-26, 2012 from a nationally representative sample of 1,005 adults.